Macrocystis pyrifera, commonly known as giant kelp or giant bladder kelp, is a species of kelp (large brown algae), and one of four species in the genus Macrocystis. Giant kelp is common along the coast of the eastern Pacific Ocean, from Baja California north to southeast Alaska, and is also found in the southern oceans near South America, South Africa, Australia, and New Zealand. Individual algae may grow to more than 60 metres (200 feet) long at a rate of as much as 60 cm (2 ft) per day. Giant kelp grows in dense stands known as kelp forests, which are home to many marine animals that depend on the algae for food or shelter. The primary commercial product obtained from giant kelp is alginate, but humans also harvest this species on a limited basis for use directly as food, as it is rich in iodine, potassium, and other minerals. It can be used in cooking in many of the ways other sea vegetables are used, and particularly serves to add flavor to bean dishes.

Giant kelp is the largest of all algae. The stage of the life cycle that is usually seen is the sporophyte, which is perennial and individuals persist for many years. Individuals may grow to up to 60 m (200 ft) long or more. The kelp often grows even longer than the distance from the bottom to the surface as it will grow in a diagonal direction due to the ocean current pushing against the kelp. The stalks arise from a holdfast and branch three or four times from near the base. Blades develop at irregular intervals along the stipe, with a single pneumatocyst (gas bladder) at the base of each blade.

A related and similar-looking, but smaller species, M. integrifolia, grows to only to 6 m (20 ft) long. It is found on intertidal rocks or shallow subtidal rocks along the Pacific coast of North America (British Columbia to California) and South America. In New Zealand giant kelp is found on the in subtidal zone of southern North Island, the South Island, Chatham, Stewart, Bounty, Antipodes, Auckland and Campbell Islands. The species can be found on rock and on sheltered open coasts. 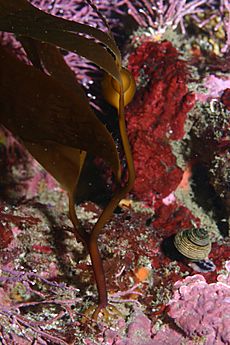 Juvenile giant kelp grow directly upon their parent female gametophyte. To establish itself, a young kelp produces one or two primary blades, and begins a rudimentary holdfast, which serves to anchor the plant to the rocky bottom. As the kelp grows, additional blades develop from the growing tip, while the holdfast enlarges and may entirely cover the rock to which it is attached.

Growth occurs with lengthening of the stipe (central stalk), and splitting of the blades. At the growing tip is a single blade, at the base of which develop small gas bladders along one side. As the bladders and stipe grow, small tears develop in the attached blade. Once the tears have completed, each bladder supports a single separate blade along the stipe, with the bladders and their blades attached at irregular intervals.

Where the bottom is rocky and affords places for it to anchor, giant kelp forms extensive kelp beds with large "floating canopies". When present in large numbers, giant kelp forms kelp forests that are home to many marine species that depend upon the kelp directly for food and shelter, or indirectly as a hunting ground for prey. Both the large size of the kelp and the large number of individuals significantly alter the availability of light, the flow of ocean currents, and the chemistry of the ocean water in the area where they grow.

In high-density populations, giant kelp individuals compete with other individuals of the species for space and resources.

Giant kelp has been utilized for many years as a food source; it also contains many compounds such as iodine, potassium, other minerals vitamins and carbohydrates and thus has also been used as a dietary supplement. In the beginning of the 20th century California kelp beds were harvested as a source for soda ash. With commercial interest increasing significantly during the 1970s and the 1980s this was primarily due to the production of alginates, and also for biomass production for animal feed due to the energy crisis during that period. However the commercial production of giant kelp never became reality. With the end of the energy crisis and the decline in prices of alginates, the research into farming Macrocystis also declined.

The demand for giant kelp is increasing due to the newfound uses of these plants such as fertilizers, cultivation for bioremediation purposes, abalone and sea urchin feed. There is current research going into utilizing giant kelp as feed for other aquaculture species such as shrimps. Recently, giant kelp has been examined as a possible feedstock for conversion into ethanol for biofuel use.

In recent years, the kelp forests have decreased dramatically throughout Japan, Chile, Korea, Australia and North America. Harvesting of kelp as a food source and other uses may be the least concerning aspect to its depletion.

The natural phenomena El Niño cycles warm, tropical water from the South Pacific to Northern waters. This has been known to kill off giant kelp, due to its need for cold waters it would usually find in the North Pacific Ocean. In California, El Niño also brought along a population bloom of Purple Sea Urchins which feed on the Giant Kelp. By the late 2000s most of the onshore Giant Kelp in California was/is practically nonexistent.

Scientists and conservationists are continuously looking into ways to restore the once heavily populated giant kelp to its original state. Methods include artificial reefs, reducing numbers of Purple Sea Urchins in over populated areas, and planting roots along the ocean floor.

All content from Kiddle encyclopedia articles (including the article images and facts) can be freely used under Attribution-ShareAlike license, unless stated otherwise. Cite this article:
Giant kelp Facts for Kids. Kiddle Encyclopedia.