Brown algae are a large group of algae. They are classified as heterokont protists because they are neither plant nor animal. All the brown algae are multicellular, composed of more than one cell. Most brown algae have fucoxanthin, a chemical that gives them a brown color.

There are 2000 species of brown algae. Most species live in the ocean. They are important as food and as homes for many animals and marine life. Some brown algae are gathered by humans for food. The giant kelp Macrocystis is a brown alga that forms underwater forests, and it may grow to 60 meters. The Sargasso Sea gets its name from the Sargassum seaweed that floats on the surface. Many brown algae grow on rocks at the seashore.

Brown algae exist in a wide range of sizes and forms. The smallest members of the group grow as tiny, feathery tufts of threadlike cells no more than a few centimeters long. Some species have a stage in their life cycle that consists of only a few cells, making the entire alga microscopic. Other groups of brown algae grow to much larger sizes. The rockweeds and leathery kelps are often the most conspicuous algae in their habitats. Kelps can range in size from the two-foot-tall sea palm Postelsia to the giant kelp Macrocystis pyrifera, which grows to over 45 m (150 ft) long and is the largest of all the algae. In form, the brown algae range from small crusts or cushions to leafy free-floating mats formed by species of Sargassum. They may consist of delicate felt-like strands of cells, as in Ectocarpus, or of foot-long flattened branches resembling a fan, as in Padina.

Regardless of size or form, two visible features set the Phaeophyceae apart from all other algae. First, members of the group possess a characteristic color that ranges from an olive green to various shades of brown. The particular shade depends upon the amount of fucoxanthin present in the alga. Second, all brown algae are multicellular. There are no known species that exist as single cells or as colonies of cells, and the brown algae are the only major group of seaweeds that does not include such forms. However, this may be the result of classification rather than a consequence of evolution, as all the groups hypothesized to be the closest relatives of the browns include single-celled or colonial forms. 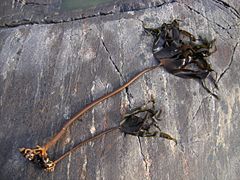 Two specimens of Laminaria hyperborea, each showing the rootlike holdfast at lower left, a divided blade at upper right, and a stemlike stipe connecting the blade to the holdfast.

Whatever their form, the body of all brown algae is termed a thallus, indicating that it lacks the complex xylem and phloem of vascular plants. This does not mean that brown algae completely lack specialized structures. But, because some botanists define "true" stems, leaves, and roots by the presence of these tissues, their absence in the brown algae means that the stem-like and leaf-like structures found in some groups of brown algae must be described using different terminology. Although not all brown algae are structurally complex, those that are typically possess one or more characteristic parts.

A holdfast is a rootlike structure present at the base of the alga. Like a root system in plants, a holdfast serves to anchor the alga in place on the substrate where it grows, and thus prevents the alga from being carried away by the current. Unlike a root system, the holdfast generally does not serve as the primary organ for water uptake, nor does it take in nutrients from the substrate. The overall physical appearance of the holdfast differs among various brown algae and among various substrates. It may be heavily branched, or it may be cup-like in appearance. A single alga typically has just one holdfast, although some species have more than one stipe growing from their holdfast.

A stipe is a stalk or stemlike structure present in an alga. It may grow as a short structure near the base of the alga (as in Laminaria), or it may develop into a large, complex structure running throughout the algal body (as in Sargassum or Macrocystis). In the most structurally differentiated brown algae (such as Fucus), the tissues within the stipe are divided into three distinct layers or regions. These regions include a central pith, a surrounding cortex, and an outer epidermis, each of which has an analog in the stem of a vascular plant. In some brown algae, the pith region includes a core of elongated cells that resemble the phloem of vascular plants both in structure and function. In others (such as Nereocystis), the center of the stipe is hollow and filled with gas that serves to keep that part of the alga buoyant. The stipe may be relatively flexible and elastic in species like Macrocystis pyrifera that grow in strong currents, or may be more rigid in species like Postelsia palmaeformis that are exposed to the atmosphere at low tide.

Many algae have a flattened portion that may resemble a leaf, and this is termed a blade, lamina, or frond. The name blade is most often applied to a single undivided structure, while frond may be applied to all or most of an algal body that is flattened, but this distinction is not universally applied. The name lamina refers to that portion of a structurally differentiated alga that is flattened. It may be a single or a divided structure, and may be spread over a substantial portion of the alga. In rockweeds, for example, the lamina is a broad wing of tissue that runs continuously along both sides of a branched midrib. The midrib and lamina together constitute almost all of a rockweed, so that the lamina is spread throughout the alga rather than existing as a localized portion of it. 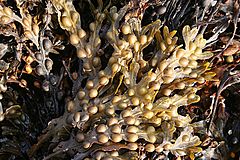 In some brown algae, there is a single lamina or blade, while in others there may be many separate blades. Even in those species that initially produce a single blade, the structure may tear with rough currents or as part of maturation to form additional blades. These blades may be attached directly to the stipe, to a holdfast with no stipe present, or there may be an air bladder between the stipe and blade. The surface of the lamina or blade may be smooth or wrinkled; its tissues may be thin and flexible or thick and leathery. In species like Egregia menziesii, this characteristic may change depending upon the turbulence of the waters in which it grows. In other species, the surface of the blade is coated with slime to discourage the attachment of epiphytes or to deter herbivores. Blades are also often the parts of the alga that bear the reproductive structures.

Gas-filled floats called pneumatocysts provide buoyancy in many kelps and members of the Fucales. These bladder-like structures occur in or near the lamina, so that it is held nearer the water surface and thus receives more light for photosynthesis. Pneumatocysts are most often spherical or ellipsoidal, but can vary in shape among different species. Species such as Nereocystis luetkeana and Pelagophycus porra bear a single large pneumatocyst between the top of the stipe and the base of the blades. In contrast, the giant kelp Macrocystis pyrifera bears many blades along its stipe, with a pneumatocyst at the base of each blade where it attaches to the main stipe. Species of Sargassum also bear many blades and pneumatocysts, but both kinds of structures are attached separately to the stipe by short stalks. In species of Fucus, the pneumatocysts develop within the lamina itself, either as discrete spherical bladders or as elongated gas-filled regions that take the outline of the lamina in which they develop.

Brown algae include a number of edible seaweeds. All brown algae contain alginic acid (alginate) in their cell walls, which is extracted commercially and used as an industrial thickening agent in food and for other uses. One of these products is used in Lithium Ion batteries. Alginic acid is used as a stable component of a battery anode. This polysaccharide is a major component of brown algae, and is not found in land plants.

Alginic acid can also be used in aquaculture. For example, alginic acid enhances the immune system of rainbow trout. Younger fish are more likely to survive when given a diet with alginic acid.

Sargachromanol G, an extract of Sargassum siliquastrum, has been shown to have anti-inflammatory effects.

All content from Kiddle encyclopedia articles (including the article images and facts) can be freely used under Attribution-ShareAlike license, unless stated otherwise. Cite this article:
Brown algae Facts for Kids. Kiddle Encyclopedia.