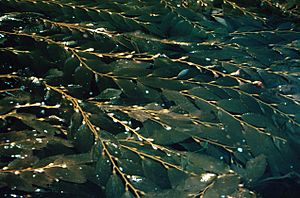 Alginic acid (algine, alginate) is a viscous gum that is abundant in the cell walls of brown algae.

Chemically, it is a linear copolymer with homopolymeric blocks of (1-4)-linked ß-D-mannuronate (M) and its C-5 epimer α-L-guluronate (G) residues, respectively, covalently linked together in different sequences or blocks.

Commercial varieties of alginate are extracted from seaweed, including the giant kelp Macrocystis pyrifera, Ascophyllum Nodosum and various types of Laminaria.

Alginate absorbs water quickly, which makes it useful as an additive in dehydrated products such as slimming aids, and in the manufacture of paper and textiles. It is also used for waterproofing and fireproofing fabrics, as a gelling agent, for thickening drinks, ice cream and cosmetics, and as a detoxifier that can absorb poisonous metals from the blood. Alginate is also produced by certain bacteria, notably Azotobacter species.

Alginate ranges from white to yellowish brown, and takes filamentous, grainy, granular, and powdered forms. It is insoluble in water and organic solvents, and dissolves slowly in basic solutions of sodium carbonate, sodium hydroxide and trisodium phosphate.

Purified forms of alginate are used in antacid preparations such as Gaviscon®, Bisodol®, Asilone®, and Boots Own® tablets. Alginate is used extensively as a mold-making material in dentistry, prosthetics, lifecasting, and in textiles. It is also used in the food industry, for thickening soups and jellies. Calcium alginate is used in different types of medical products, including burn dressings that promote healing and which can be removed painlessly.

Also, due to alginate's biocompatibility and simple gelation with divalent cations, it is widely used for cell immobilization and encapsulation.

Alginic acid (alginato) is also used in culinary arts, most notably in the "Esferificación" (Sphereification) techniques of Ferrán Adriá of Barcelona's El Bulli, in which natural juices of fruits and vegetables are encapsulated in bubbles that "explode" on the tongue when consumed.

All content from Kiddle encyclopedia articles (including the article images and facts) can be freely used under Attribution-ShareAlike license, unless stated otherwise. Cite this article:
Alginic acid Facts for Kids. Kiddle Encyclopedia.