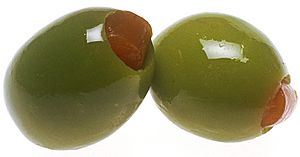 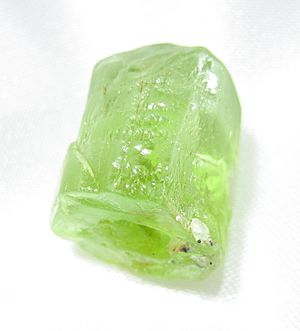 Olive is a kind of muddy green color. In actuality, it is really a shade of dark yellow (when gray or black is added to yellow, the various shades of the color olive are produced). Some dark shades of olive can also be made by mixing a darker color (like brown) with green.

The color of old U.S. Army field uniforms is a shade of olive called olive drab (shown below) that was used because it was hard to see against trees and grass.

The most common place you will find the color olive is on an olive. It is the color of the outside of an olive. An olive's center is usually brown or sometimes orange or red.

There is a mineral called olivine that is colored a pale olive color.

All content from Kiddle encyclopedia articles (including the article images and facts) can be freely used under Attribution-ShareAlike license, unless stated otherwise. Cite this article:
Olive (color) Facts for Kids. Kiddle Encyclopedia.