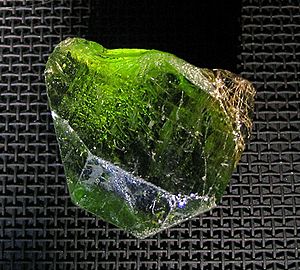 Olivine (or chrysolite) is a mineral made of magnesium iron silicate with the formula (Mg,Fe)2SiO4

It ranges in colour from chartreuse green to pale olive. In its gem form, it is called peridot.

Dunite is a rock of 90%+ olivine. Dunite and other peridotite rocks are major constituents of the Earth's mantle above a depth of about 400 kilometers. Dunite is rarely found on land, except where slabs of mantle rock from a subduction zone have been thrust onto continental crust. Olivine has also been found at several extraterrestrial locations, such as the moon and many passing space rocks - as well as the outer layers of dust orbiting young stars.

Olivine is used as a substitute for dolomite in steel works. Olivine is also used to tap blast furnaces in the steel industry, acting as a plug, removed in each steel run.

The aluminium foundry industry uses olivine sand to cast objects in aluminium. Olivine sand requires less water than silica sands while still holding the mold together during handling and pouring of the metal. Less water means less gas (steam) to vent from the mold as metal is poured into the mold.

In Finland, olivine is marketed as an ideal rock for sauna stoves because of its comparatively high density and resistance to weathering under repeated heating and cooling.

All content from Kiddle encyclopedia articles (including the article images and facts) can be freely used under Attribution-ShareAlike license, unless stated otherwise. Cite this article:
Olivine Facts for Kids. Kiddle Encyclopedia.