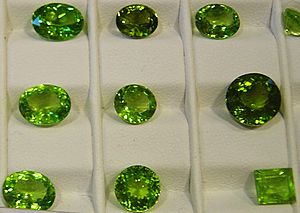 Peridot (pronounced "pair-uh-dot" or "pair-uh-doe") is the gem quality version of the mineral olivine. The name of the gemstone is believed to come from either the Arabic word faridat meaning "gem" or the French word peritot meaning "unclear." Peridot is one of the few gemstones that comes in only one color. The darkness of the green depends on how much iron there is. The color varies from yellow-green to olive to brownish green. Olivine is a very common mineral, but gem-quality peridot is rather rare. Peridot is the birthstone for the month of August.Peridot is believed to bring good health,restful sleep and peace to relations by balancing emotions and mind.

All content from Kiddle encyclopedia articles (including the article images and facts) can be freely used under Attribution-ShareAlike license, unless stated otherwise. Cite this article:
Peridot Facts for Kids. Kiddle Encyclopedia.