A blast furnace is usually built with a steel case and bricks made of magnesium oxide or other refractory material inside the case. The hot furnace cannot melt these bricks. The furnace is cooled with water running inside part of the case and bricks.

The process of making iron is simple. Iron ore is basically iron oxide. Iron is made by removing the oxygen. This leaves crude iron called pig iron. This process of removing oxygen is called smelting. Carbon is used in the reduction process, with the ore heated to a high temperature. Carbon easily takes the oxygen off the ore in high temperatures. 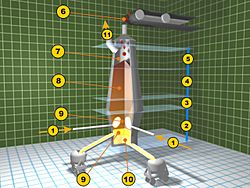 Ore, limestone and carbon in the form of coke are put into the top of the blast furnace in layers. At the same time, hot air called "wind" is blown inside the furnace. Special nozzles called "tuyeres" are used to put the air in the furnace. The nozzles are at the bottom of the furnace. This process is called "blasting". It is why it is called a "blast furnace". The coke ignites (lights on fire) and burns. This creates carbon monoxide because there is not enough oxygen to make carbon dioxide. The carbon monoxide then reduces the metal oxide to the metal and makes carbon dioxide. This process is used to make iron. The limestone forms a substance called slag with the rock of the iron ore.

The bottom part of the furnace is called the hearth. When it has filled with liquid pig iron and slag, the slag is removed. This is called skimming. Slag is lighter than iron and does not mix with iron. It floats on top of the iron. A hole is made in the hearth at the level of the slag with a special drill. The liquid slag moves out through the hole into a container called slag pot. The iron is then drained from the hearth. This is called tapping. A hole is made at the bottom and the liquid pig iron comes out. It is either used directly for steelmaking, put into a special railway wagon called torpedo car or made into molds. When all the pig iron has been removed, fire-resistant clay is used to close the two holes. The clay becomes solid very quickly because of the high heat.

The pig iron contains some 4% of carbon and it would be too hard and too brittle to use. The extra carbon must first be burned away. The pig iron is refined into steel by decarburizing (burning the extra carbon off of) it. A modern method for decarburizing the pig iron and refining it into steel is basic oxygen furnace. Historically there has been other methods as well, such as Bessemer converter, open hearth furnace and puddling furnace.

The slag is not waste. It can be used in various ways. It can be made into bricks and used for construction, or it can be mixed with concrete. Concrete which contains blast furnace slag is stronger than ordinary concrete and is almost pure white, where normal concrete is dirty grey.

A blast furnace can usually work for 10 to 20 years without stopping. This is called a "campaign."

Now iron has been made.

All content from Kiddle encyclopedia articles (including the article images and facts) can be freely used under Attribution-ShareAlike license, unless stated otherwise. Cite this article:
Blast furnace Facts for Kids. Kiddle Encyclopedia.