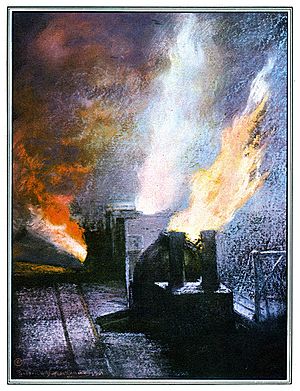 A converter is a chemical reactor which turns raw iron into steel.

Raw iron called pig iron which is the product of blast furnace, contains up to 4% of carbon. It is too hard and brittle for meaningful use. The carbon must first be burned off the iron to produce steel. This process is called conversion and the reactor a converter.

The first converter was invented by Sir Henry Bessemer in 1856. He built a pear-shaped large vessel with nozzles (tuyeres) for air in the bottom. Hot molten pig iron from blast furnace was poured in the converter, and then air was pumped in at the bottom with high pressure. The result was a loud noise and a flame of up to 20 metres off the mouth of the converter. After ten minutes all the pig iron had become steel. The Bessemer converter was the first successful reactor on converting pig iron into steel, and the era of steel began. Steel was now plentiful and cheap.

However, steel becomes better if only oxygen is blown in. Air contains nitrogen, which is harmful for some steel grades. A modern converter called basic oxygen furnace uses pure oxygen instead of air. It was invented 1949 in Austria.

The modern basic oxygen converter is a large pumpkin-shape vessel which is made from steel and lined with refractories such as calcium oxide and magnesium oxide line so the vessel can withstand the high temperature of molten metal.

Molten pig iron and scrap are loaded in the converter. The scrap usually is rusty and contains oxygen, so some of the rust reacts with the pig iron, burning the carbon away and creating heat which melts the scrap. Once all scrap has melted, a special pipe called "oxygen lance" is lowered in the pig iron, and a very fast and sharp blow of oxygen is blasted in. The oxygen burns all the carbon away and mixes the liquid steel thoroughly. Once all carbon has been burned away, some extra carbon is inserted to raise the contents to desired level. The result is liquid steel, which is then tapped away and taken to rolling mill to produce steel products.

All content from Kiddle encyclopedia articles (including the article images and facts) can be freely used under Attribution-ShareAlike license, unless stated otherwise. Cite this article:
Converter (metallurgy) Facts for Kids. Kiddle Encyclopedia.