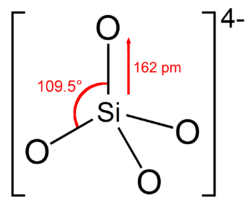 Structure of the orthosilicate anion SiO4−
4

In chemistry, a silicate is a compound consisting of one or more central silicon atoms that are surrounded by electronegative ligands.

The most common silicate species consist of silicon with oxygen as the ligand. Silicate anions, with a negative net electrical charge, must have that charge balanced by other cations to make an electrically neutral compound.

In geology and astronomy, the term silicate is used to denote types of rock that consist predominantly of silicate minerals.

On Earth, a wide variety of silicate minerals occur in an even wider range of combinations as a result of the processes that form and re-work the crust. These processes include partial melting, crystallization, fractionation, metamorphism, weathering and diagenesis. Living things also contribute to the silicate cycle near the Earth's surface. A type of plankton known as diatoms construct their exoskeletons, known as tests, from silica. The tests of dead diatoms are a major constituent of deep ocean sediment

All content from Kiddle encyclopedia articles (including the article images and facts) can be freely used under Attribution-ShareAlike license, unless stated otherwise. Cite this article:
Silicate Facts for Kids. Kiddle Encyclopedia.