The deep sea or deep layer is the lowest layer in the ocean, existing below the thermocline and above the seabed, at a depth of 1000 fathoms (1800 m) or more. Little or no light penetrates this part of the ocean, and most of the organisms that live there rely for subsistence on falling organic matter produced in the photic zone. For this reason, scientists once assumed that life would be sparse in the deep ocean, but virtually every probe has revealed that, on the contrary, life is abundant in the deep ocean.

In 1960, the Bathyscaphe Trieste descended to the bottom of the Mariana Trench near Guam, at 10,911 m (35,797 ft; 6.780 mi), the deepest known spot in any ocean. If Mount Everest (8,848 metres) were submerged there, its peak would be more than a mile beneath the surface. The Trieste was retired, and for a while the Japanese remote-operated vehicle (ROV) Kaikō was the only vessel capable of reaching this depth. It was lost at sea in 2003. In May and June 2009, the hybrid-ROV (HROV) Nereus returned to the Challenger Deep for a series of three dives to depths exceeding 10,900 meters.

It has been suggested that more is known about the Moon than the deepest parts of the ocean. Life on the deep ocean floor was assumed to rely solely on falling organic matter, and therefore ultimately the sun, for its energy source until the discovery of thriving colonies of shrimps and other organisms around hydrothermal vents in the late 1970s. The new discoveries revealed groups of creatures that obtained nutrients and energy directly from thermal sources and chemical reactions associated with changes to mineral deposits. These organisms thrive in completely lightless and anaerobic environments in highly saline water that may reach 300 °F (150 °C), drawing their sustenance from hydrogen sulfide, which is highly toxic to almost all terrestrial life. The revolutionary discovery that life can exist under these extreme conditions changed opinions about the chances of there being life elsewhere in the universe. Scientists now speculate that Europa, one of Jupiter's moons, may be able to support life beneath its icy surface, where there is evidence of a global ocean of liquid water.

Natural light does not penetrate the deep ocean, with the exception of the upper parts of the mesopelagic. Since photosynthesis is not possible, plants and phytoplankton cannot live in this zone. Since these are the primary producers of almost all of earth's ecosystems, life in this area of the ocean must depend on energy sources from elsewhere. Except for the areas close to the hydrothermal vents, this energy comes from organic material drifting down from the photic zone. The sinking organic material is composed of algal particulates, detritus, and other forms of biological waste, which is collectively referred to as marine snow.

Because pressure in the ocean increases by about 1 atmosphere for every 10 meters of depth, the amount of pressure experienced by many marine organisms is extreme. Until recent years, the scientific community lacked detailed information about the effects of pressure on most deep sea organisms because the specimens encountered arrived at the surface dead or dying and weren't observable at the pressures at which they lived. With the advent of traps that incorporate a special pressure-maintaining chamber, undamaged larger metazoan animals have been retrieved from the deep sea in good condition.

Salinity is remarkably constant throughout the deep sea, at about 35 parts per thousand. There are some minor differences in salinity, but none that are ecologically significant, except in the Mediterranean and Red Seas. 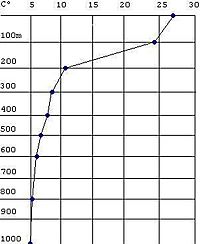 Thermocline of the tropical ocean.

The two areas of greatest temperature gradient in the oceans are the transition zone between the surface waters and the deep waters, the thermocline, and the transition between the deep-sea floor and the hot water flows at the hydrothermal vents. Thermoclines vary in thickness from a few hundred meters to nearly a thousand meters. Below the thermocline, the water mass of the deep ocean is cold and far more homogeneous. Thermoclines are strongest in the tropics, where the temperature of the epipelagic zone is usually above 20 °C. From the base of the epipelagic, the temperature drops over several hundred meters to 5 or 6 °C at 1,000 meters. It continues to decrease to the bottom, but the rate is much slower. The cold water stems from sinking heavy surface water in the polar regions.

At any given depth, the temperature is practically unvarying over long periods of time, without seasonal changes and with very little interannual variability. No other habitat on earth has such a constant temperature.

In hydrothermal vents the temperature of the water as it emerges from the "black smoker" chimneys may be as high as 400 °C (it is kept from boiling by the high hydrostatic pressure) while within a few meters it may be back down to 2 to 4 °C.

Regions below the epipelagic are divided into further zones, beginning with the mesopelagic which spans from 200 to 1000 meters below sea level, where so little light penetrates that primary production becomes impossible. Below this zone the deep sea begins, consisting of the aphotic bathypelagic, abyssopelagic and hadopelagic. Food consists of falling organic matter known as 'marine snow' and carcasses derived from the productive zone above, and is scarce both in terms of spatial and temporal distribution.

Instead of relying on gas for their buoyancy, many deep-sea species have jelly-like flesh consisting mostly of glycosaminoglycans, which provides them with very low density. It is also common among deep water squid to combine the gelatinous tissue with a flotation chamber filled with a coelomic fluid made up of the metabolic waste product ammonium chloride, which is lighter than the surrounding water.

The midwater fish have special adaptations to cope with these conditions—they are small, usually being under 25 centimetres (10 in); they have slow metabolisms and unspecialized diets, preferring to sit and wait for food rather than waste energy searching for it. They have elongated bodies with weak, watery muscles and skeletal structures. They often have extendable, hinged jaws with recurved teeth. Because of the sparse distribution and lack of light, finding a partner with which to breed is difficult, and many organisms are hermaphroditic.

Because light is so scarce, fish often have larger than normal, tubular eyes with only rod cells. Their upward field of vision allows them to seek out the silhouette of possible prey. Prey fish however also have adaptations to cope with predation. These adaptations are mainly concerned with reduction of silhouettes, a form of camouflage. The two main methods by which this is achieved are reduction in the area of their shadow by lateral compression of the body, and counter illumination via bioluminescence. This is achieved by production of light from ventral photophores, which tend to produce such light intensity to render the underside of the fish of similar appearance to the background light. For more sensitive vision in low light, some fish have a retroreflector behind the retina. Flashlight fish have this plus photophores, which combination they use to detect eyeshine in other fish (see tapetum lucidum).

Organisms in the deep sea are almost entirely reliant upon sinking living and dead organic matter which falls at approximately 100 meters per day. In addition, only about 1 to 3% of the production from the surface reaches the sea bed mostly in the form of marine snow. Larger food falls, such as whale carcasses, also occur and studies have shown that these may happen more often than currently believed. There are many scavengers that feed primarily or entirely upon large food falls and the distance between whale carcasses is estimated to only be 8 kilometers. In addition, there are a number of filter feeders that feed upon organic particles using tentacles, such as Freyella elegans.

Marine bacteriophages play an important role in cycling nutrients in deep sea sediments. They are extremely abundant (between 5x1012 and 1x1013 phages per square meter) in sediments around the world.

Despite being so isolated deep sea organisms have still been harmed by human interaction with the oceans. The London Convention aims to protect the marine environment from dumping of wastes such as sewage sludge and radioactive waste. A study found that at one region there had been a decrease in deep sea coral from 2007 to 2011, with the decrease being attributed to global warming and ocean acidification, and biodiversity estimated as being at the lowest levels in 58 years. Ocean acidification is particularly harmful to deep sea corals because they are made of aragonite, an easily soluble carbonate, and because they are particularly slow growing and will take years to recover. Deep sea trawling is also harming the biodiversity by destroying deep sea habitats which can take years to form. Another human activity that has altered deep sea biology is mining. One study found that at one mining site fish populations had decreased at six months and at three years, and that after twenty six years populations had returned to the same levels as prior to the disturbance.

There are a number of species that do not primarily rely upon dissolved organic matter for their food and these are found at hydrothermal vents. One example is the symbiotic relationship between the tube worm Riftia and chemosynthetic bacteria. It is this chemosynthesis that supports the complex communities that can be found around hydrothermal vents. These complex communities are one of the few ecosystems on the planet that do not rely upon sunlight for their supply of energy.

The deep sea is one of the less explored areas on Earth. Pressures even in the mesopelagic become too great for traditional exploration methods, demanding alternative approaches for deep sea research. Baited camera stations, small manned submersibles and ROVs (remotely operated vehicles) are three methods utilized to explore the ocean's depths. Because of the difficulty and cost of exploring this zone, current knowledge is limited. Pressure increases at approximately one atmosphere for every 10 meters meaning that some areas of the deep sea can reach pressures of above 1,000 atmospheres. This not only makes great depths very difficult to reach without mechanical aids, but also provides a significant difficulty when attempting to study any organisms that may live in these areas as their cell chemistry will be adapted to such vast pressures.

All content from Kiddle encyclopedia articles (including the article images and facts) can be freely used under Attribution-ShareAlike license, unless stated otherwise. Cite this article:
Deep sea Facts for Kids. Kiddle Encyclopedia.