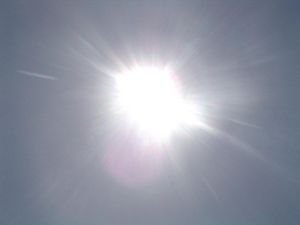 An image of the Sun and of its radiation.

Sunlight is the light and energy that comes from the Sun. When this energy reaches the earth's surface, it is called insolation. What we experience as sunlight is actually solar radiation. It is the radiation and heat from the Sun in the form of electromagnetic waves.

Without sunlight, there could not be life on the Earth. Plants need sunlight for the process of photosynthesis. During photosynthesis the plants use the energy of the sunlight, water, and carbon dioxide, to create glucose (sugar). The glucose can later be used by the plant for energy or animals eat the plant and the glucose in it. Plants need sunlight to grow green. Without enough sunlight but with enough water, the plant grows very tall very quickly, but looks yellow and dehydrated, although when touched, the leaves are very moist.

Solar radiation can be both good and bad for a person's health. When in the light, the human body uses the ultraviolet part of sunlight to make its own Vitamin D. Without sunscreen too much ultraviolet light can cause sunburn and skin cancer. Sun angle makes difference in seasons on Earth as well as in the length of day and night. A high angle makes the tropics hot, and a low angle makes the arctic cold.

Intensity of sunlight on planets of Solar System 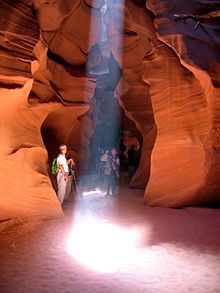 Sunlight in the Antelope Canyon, Arizona.

Use of solar energy

Solar energy is used in many different ways by people all over the world both in its traditional way for heating, cooking or drying and to make electricity where other power supplies are absent, such as in remote places on Earth or in the space. Sometimes, it is cheaper to make electricity from sunlight than from coal or oil.

All content from Kiddle encyclopedia articles (including the article images and facts) can be freely used under Attribution-ShareAlike license, unless stated otherwise. Cite this article:
Sunlight Facts for Kids. Kiddle Encyclopedia.