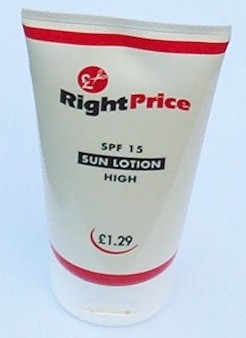 A tube of SPF 15 sun lotion

Sunscreen (also known as sunblock, suntan lotion) is a lotion, spray or other topical product that helps protect the skin from the sun's ultraviolet (UV) radiation. It reduces sunburn and other skin damage, with the goal lowering your risk of skin cancer. However, in the United States, the term suntan lotion usually means the opposite of sunscreen, and instead refers to lotion designed to moisturize and maximize UV exposure and tanning rather than block it. These are commonly called indoor tanning lotions when designed for use with tanning beds or just suntan lotion if designed for outdoor use and may or may not have SPF protection in them.

The most effective sunscreens protect against both UVB (ultraviolet radiation with wavelength between 290 and 320 nanometres), which can cause sunburn, and UVA (between 320 and 400 nanometres), which damages the skin with more long-term effects, such as premature skin aging. Most sunscreens work by containing either an organic chemical compound that absorbs ultraviolet light (such as oxybenzone) or an opaque material that reflects light (such as titanium dioxide, zinc oxide), or a combination of both. Typically, absorptive materials are referred to as chemical blocks, whereas opaque materials are mineral or physical blocks.

All content from Kiddle encyclopedia articles (including the article images and facts) can be freely used under Attribution-ShareAlike license, unless stated otherwise. Cite this article:
Sunscreen Facts for Kids. Kiddle Encyclopedia.