The term Southern Australia is generally considered to refer to the states and territories of Australia of New South Wales, Victoria, Tasmania, the Australian Capital Territory and South Australia. The part of Western Australia south of latitude 26° south — a definition widely used in law and state government policy — is also usually included.

Although it comprises about half of the total area of Australia, Southern Australia includes about three-quarters of the Australian population, the main agricultural areas and the main industrial centres. The area is also notable for its primarily temperate, mediterranean, alpine or arid environmental and climatic conditions which contrasts to the mainly tropical climate of Northern Australia.

Southern Australia has long suffered extreme weather events due to the arid landscape, however in recent times these conditions have been exacerbated due to climate change.

The region has several key industries which contribute to the high gross product and large value of exports. Southern Western Australia largely focuses on mining as a key export, whilst the states of Victoria and New South Wales focus on traditional sectors such as manufacturing, tourism, and finance. Tasmania and South Australia are regional economies, primarily concentrated on manufacturing.

Southern Australia is the richest part of Australia, home to a diversified economy with an expansive variety of exports including minerals, wine, dairy, livestock, education, and tourism. Across the region, there is sustainable employment, with all state's unemployment rates being below 8%.

Economists have suggested that Australia moves at two different speeds, with some states focusing on traditional sectors such as manufacturing, finance and tourism, and others emphasising mining industries. NSW and Victoria are seen as traditional economies, primarily focusing on said “traditional” industries, whilst South Western Australia emphasises mining. Regional economies such as Tasmania and South Australia prioritise manufacturing, closing them off to advancing in faster growing industries.

Such fertile soils transpire across the region, whereby Victoria exports 80% of Australia's produced dairy. The state encompasses just 3% of Australian land yet produces 22% of the nation's GDP. 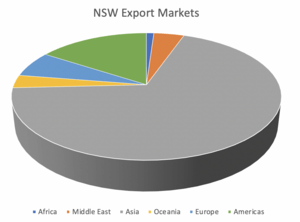 Whilst Western Australia and Queensland have experienced high growth due to the mining resource boom, NSW has recorded dwindling economic growth, measuring lower Gross State Product (GSP) than national GDP since 2001. Nonetheless, NSW's main economic activities include the exporting of minerals such as coal, copper and concentrates, livestock, cropping and horticulture. NSW's number one export market is Asia grossing $3,068m annually, followed by the Americas and Europe.

Contrastingly, the ACT has experienced major growth of approximately 13% over the past 3 years. This is namely due to the prominent tertiary education sector and subsequent increase in popularity among students.

All content from Kiddle encyclopedia articles (including the article images and facts) can be freely used under Attribution-ShareAlike license, unless stated otherwise. Cite this article:
Southern Australia Facts for Kids. Kiddle Encyclopedia.