Kangaroo Island is Australia's third-largest island, after Tasmania and Melville Island. It lies in the state of South Australia 112 km (70 mi) southwest of Adelaide. Its closest point to the mainland is Snapper Point in Backstairs Passage which is 13.5 km (8.4 mi) from the Fleurieu Peninsula.

Once occupied by Aboriginal Australians, the native population disappeared from the archaeological record when the land became an island following rising sea levels several thousand years ago. It was subsequently settled intermittently by sealers and whalers in the early 19th century, and from 1836 on a permanent basis during the establishment of the colony of South Australia.

Since then the island's economy has been principally agricultural, with a southern rock lobster fishery and with tourism growing in importance. The island has several nature reserves to protect the remnants of its natural vegetation and native animals, with the largest and best-known being Flinders Chase National Park at the western end.

The biggest town on Kangaroo Island is Kingscote. Originally established at Reeves Point on 27 July 1836, it is South Australia's first colonial settlement. It was later suggested that Kingscote could serve as the capital of South Australia, but the island's resources were insufficient to support such a large community, so the settlement of Adelaide was chosen.

Wildlife and its protection 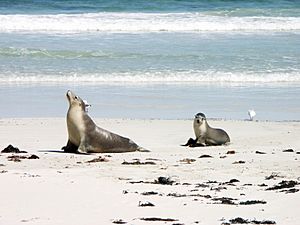 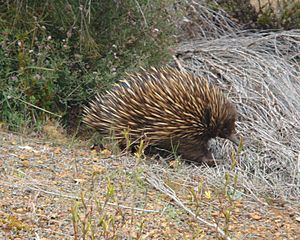 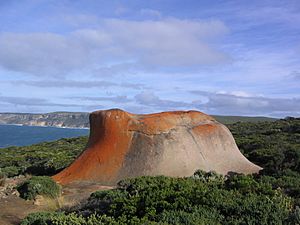 More than half of the island has never been cleared of vegetation, and a quarter of it is conserved in National Parks, Conservation Parks, and five Wilderness Protection Areas. The main protected areas are:

Because of its isolation from mainland Australia, foxes and rabbits are absent from and prohibited from entering the island. Registration and microchipping of cats is mandatory.

Kangaroo Island had a native species of Emu, the Kangaroo Island Emu; however, it became extinct between 1802 and official European settlement in 1836, perhaps owing to bushfires or from hunting by sealers or whalers.

Kangaroo Island is noted for its honey and its Ligurian honey bees. The island has the world's only pure-bred and disease-free population of this type of bee. The exporting of pure-bred queen bees is a notable industry for the island. For this reason there are significant quarantine restrictions on bringing bee products and bee-handling equipment onto the island. 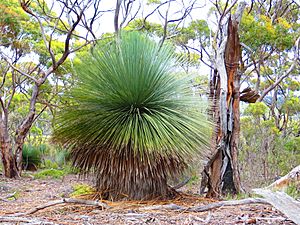 The economy is mostly agricultural (grapes, honey, wool, meat and grain). Traditionally, sheep grazing has been the key element in agriculture on the Island, however in recent times, more diverse crops, such as potatoes and canola have been introduced. Cattle farming has grown as well, with good quality beef cattle being grown in the higher rainfall areas. 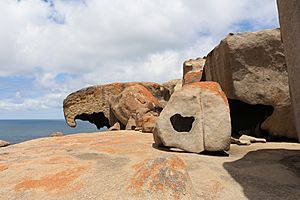 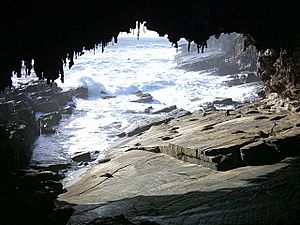 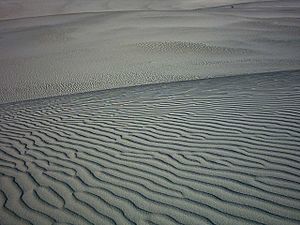 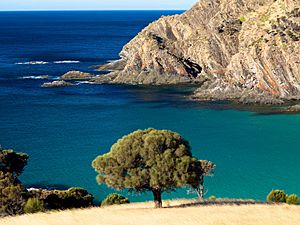 Safe swimming is possible on the northern beaches, such as Emu Bay, Stokes Bay or Snellings Beach, and at Island Beach on the Dudley Peninsula. The south coast has dangerous undertows and is more suitable for stronger and experienced swimmers only. An ocean pool with easy shore and pontoon access exists at Kingscote and is free to use. 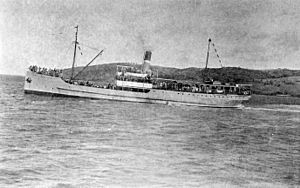 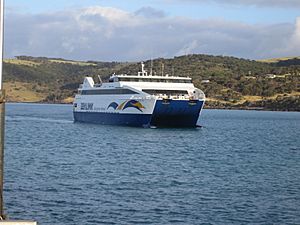 From 1907 to 1961, SS Karatta was the prime freight and passenger vessel operating between Port Adelaide and Kingscote.

Following withdrawal from service of Karatta, RW. Miller operated the MV Troubridge, in later years as a joint venture with the South Australian Government. Troubridge was a roll on, roll off vessel of 1,996 tons, which used specially designed loading gantries at Port Adelaide, Port Lincoln and Kingscote.

Troubridge operated until 1 June 1987, when it was replaced by the Government run A$23 million Island Seaway.

With the introduction by SeaLink of the Island Navigator, the fate of Island Seaway was sealed, with the service withdrawn and SeaLink drawing on Government subsidies to operate all freight services to and from the Island.

SeaLink now holds a virtual monopoly on sea transport to Kangaroo Island, primarily due to its long term lease of the Cape Jervis berth. Sealink's agreement with the SA Government, expiring in 2024, precludes other operators from using the Cape Jervis facility for one hour before, and one hour after any scheduled SeaLink service. Kangaroo Island residents have expressed displeasure with the exclusive arrangement granted to SeaLink.

Lightning strikes on Thursday 6 December 2007 caused several fires on the Island. Before being contained on 16 December 2007 over 20% of the Island had been burnt totaling 900 square kilometres (220,000 acres), principally within National Park and Conservation Reserves.

The most serious outbreak occurred in Flinders Chase National Park, with 630 square kilometres (or 85% of the total park area) having been burnt.

In January 2020 the Island was one of many places nationwide affected by bushfire as part of the 2019–20 Australian bushfire season.

Across Kangaroo Island, several fires burnt in excess of 1,500 square kilometres (370,000 acres). A bushfire emergency warning was issued on 3 January 2020 as the fire advanced towards Vivonne Bay and the town of Parndana was evacuated.

Two people died on Kangaroo Island due to the fires.

All content from Kiddle encyclopedia articles (including the article images and facts) can be freely used under Attribution-ShareAlike license, unless stated otherwise. Cite this article:
Kangaroo Island Facts for Kids. Kiddle Encyclopedia.