The western grey kangaroo (Macropus fuliginosus) is a large and very common kangaroo or macropod. It lives right across the southern part of Australia. They live from just south of Shark Bay in Western Australia to western Victoria. In South Australia they live along the coast. They also live in the Murray-Darling Basin in New South Wales and Queensland. The subspecies on Kangaroo Island, South Australia, is called the Kangaroo Island kangaroo.

The western grey kangaroo is one of the largest kangaroos. It weighs 28–54 kg and its length is 0.84-1.1m with a 80–100 cm tail, and is about 1.3m tall. It has sexual dimorphism with the male up to twice the size of female. It has thick, coarse fur with colour ranging from pale grey to brown. It has a paler color on its throat, chest and belly. It feeds at night, mainly on grasses but also on leafy shrubs and low trees. It has a nickname Stinker because mature males have a curry-like odour.

The kangaroo lives in groups of up to 15. The males compete for females during the breeding season. During these "boxing" contests, they would lock arms and try to push each other over. Usually, only the strongest male in the group mates. The gestation period is 30–31 days. After the birth, the tiny baby Joey attaches to the teat in the females pouch for nine months. After it comes out of the pouch, it will continue to drink milk from the mother's pouch for about another nine months.

Long known to the Aboriginal people of Australia, for Europeans, the western grey was the centre of a great deal of sometimes comical taxonomic confusion for almost 200 years. It was first noted by European settlers when the great explorer Matthew Flinders landed on Kangaroo Island in 1802. Flinders shot several for food but assumed that they were eastern grey kangaroos. In 1803 French explorers captured several Kangaroo Island Western Greys and shipped them home to Paris, where they lived in the zoological gardens for some years. Eventually, researchers at the Paris Museum of Natural History recognised that these animals were indeed different and formally described the species as Macropus fuliginosus in 1817. Unfortunately, for reasons that remain unclear, it was described as native to Tasmania.

There the matter rested for over 100 years, and it was not until 1917 that researchers realised that the "forester kangaroo" of Tasmania was in fact Macropus giganteus, the same western grey kangaroo that was, and still is, widespread in the more fertile south-eastern part of the mainland. By 1971, it was understood that the Kangaroo Island species was the same as the kangaroos of southern Western Australia, and that this population extended through much of the eastern part of the continent as well. For a time, three subspecies were described, two on the mainland and one on Kangaroo Island. Finally, by the early 1990s, the current understanding emerged. 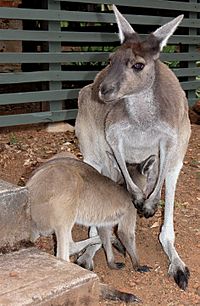 All content from Kiddle encyclopedia articles (including the article images and facts) can be freely used under Attribution-ShareAlike license, unless stated otherwise. Cite this article:
Western grey kangaroo Facts for Kids. Kiddle Encyclopedia.