Mundaring Weir is a dam (and historically the adjoining locality) located 39 kilometres (24 mi) from Perth, Western Australia in the Darling Scarp. The dam and reservoir form the boundary between the suburbs of Reservoir and Sawyers Valley. The dam impounds the Helena River.

A soldier, Ensign Robert Dale, became the first European to explore the region in 1829.

European populations did not grow significantly until construction of the dam in the late 1890s. This involved the building of a railway line from Mundaring to the Mundaring Weir site. The Irish Australian engineer C. Y. O'Connor was involved in the design of a scheme that transported water to the Eastern Goldfields of Coolgardie and Kalgoorlie in the eastern part of Western Australia.

The lake created by the dam was known as the Helena River Reservoir, however it is now known as Lake C.Y. O'Connor.

The owner of the dam, the Water Corporation, refers to the weir as Mundaring Dam on its website, but no other authority, such as Geographic Names, or Geosciences Australia uses this term. The Mundaring Shire uses an image of the Mundaring Weir in its logo.

Work commenced to raise the dam in the late 1940s, and was completed in November 1951.

In the early 1970s the downstream dam from the weir—the Lower Helena Pumpback Dam—was constructed.

It last overflowed into the Helena Valley in 1996.

Like any structure of its age and design, the weir requires monitoring and repairs and maintenance. On the original structure the central small building was used for aspects of monitoring the weir's internal status – it was rebuilt on the heightening of the dam, although it was no longer used for its original purpose.

In 2009 two face wall entrance points were created on either side (north and south) of the face to facilitate access to the monitoring tunnels. The weir leaks, and the two photos following show consistent stain/moisture points between 2008 and 2010 where water moves through the structure:

Mundaring Weir Hotel, previously known as the Reservoir Hotel, then the Goldfields Weir Hotel, has been in the area since 1898. It was a crucial location where O'Connor stayed regularly during the construction of the weir. After a period of decline it has regained popularity in recent years becoming a get-away for Perth residents, due to the current owner, Jens Jorgensen who bought it in 1984. It has been the location of annual concerts which included David Helfgott concerts during and after his recovered career as concert pianist. 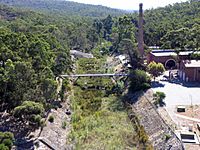 The old "Pumping Station Number 1" is now the C Y O'Connor Museum run by the National Trust. There is also the Kookaburra outdoor cinema, and the Department of Environment and Conservation has the Hills Forest activity centre, as well as a regional administrative office.

Before rationalisation of its work force at this locality, the Water Authority of Western Australia's operations at the Weir maintained housing for its workers. There is a youth hostel (built at the site of the now defunct primary school), an art gallery in the area, and many picnicking spots. There is still rangers' housing at the site, along with functioning pumping stations and water treatment facilities.

The 963 kilometres (598 mi) walking trail Bibbulmun Track commences in Kalamunda following Piesse Brook, then along the south side of the Helena valley. Crossing the weir wall the track follows the northern side of C.Y.O'Connor lake before turning south and continuing the journey to Albany. 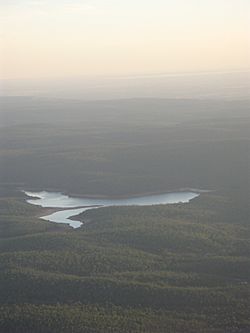 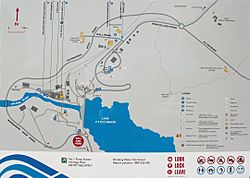 The history and context of the whole Goldfields Water Supply Scheme was celebrated by the Golden Pipeline project, where the Water Corporation had the National Trust of Australia (WA) create an "interpretation" of the history of the scheme with guide books, trails, and web-sites to provide information about the history of the scheme. Most of this project was developed between 2001 and 2003.

All content from Kiddle encyclopedia articles (including the article images and facts) can be freely used under Attribution-ShareAlike license, unless stated otherwise. Cite this article:
Mundaring Weir Facts for Kids. Kiddle Encyclopedia.