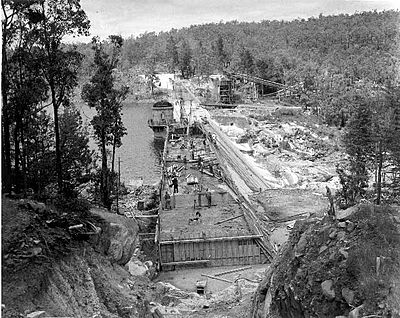 Mundaring Weir nearing completion in about 1901

The Goldfields Water Supply Scheme is a pipeline and dam project that delivers potable water from Mundaring Weir in Perth to communities in Western Australia's Eastern Goldfields, particularly Coolgardie and Kalgoorlie. The project was commissioned in 1896 and completed in 1903.

The pipeline continues to operate today, supplying water to over 100,000 people in over 33,000 households as well as mines, farms and other enterprises.

During the early 1890s, thousands of settlers had travelled into the barren and dry desert centre of Western Australia in search of gold, but the existing infrastructure for the supply of water was non-existent and an urgent need arose.

Prior to the scheme, water condensers, irregular rain, and water trains were part of the range of sources. Railway dams were essential for water to supply locomotives to travel to the goldfields.

Origins of the scheme

Throughout the 1890s, water availability issues in Coolgardie and in the Kalgoorlie-Boulder region were causing concern to the population. On 16 July 1896, the Premier of Western Australia, Sir John Forrest introduced to Western Australian Parliament a bill to authorise the raising of a loan of £2.5 million to construct the scheme: the pipeline would convey 23,000 kilolitres (5,100,000 imp gal) of water per day to the Goldfields from a dam on the Helena River near Mundaring in Perth.

The scheme consisted of three key elements – the Mundaring Weir, which dammed the Helena River in the Darling Scarp creating the Helena River Reservoir; a 760 millimetres (30 in) diameter steel pipe which ran from the dam to Kalgoorlie 530 kilometres (330 mi) away; and a series of eight pumping stations and two small holding dams to control pressures and to lift the water over the Darling Scarp. 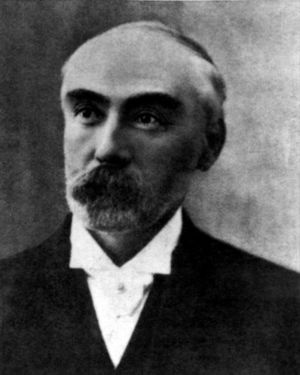 The scheme was devised by C. Y. O'Connor who oversaw its design and most of the construction project. Although supported by Premier Forrest, O'Connor had to deal with widespread criticism and derision from members of the Western Australian Parliament as well as the local press based on a belief that the scope of the engineering task was too great and that it would never work.

There was also a concern that the gold discoveries would soon dry up and the state would be left with a significant debt to repay but little or no commerce to support it.

Sunday Times editor Frederick Vosper – who was also a politician, ran a personal attack on O'Connor's integrity and ability through the paper. Timing was critical, Forrest as a supporter had moved into Federal politics, and the new Premier George Leake had long been an opponent of the scheme.

O'Connor died in March 1902 less than 12 months before the final commissioning of the pipeline.

Lady Forrest officially started the pumping machinery at Pumping Station Number One (Mundaring) on 22 January, and on 24 January 1903 water flowed into the Mount Charlotte Reservoir at Kalgoorlie. O'Connor's engineer-in-chief, C. S. R. Palmer took over the project after his death, seeing it through to its successful completion.

The government conducted an inquiry into the scheme and found no basis for the press accusations of corruption or misdemeanours on the part of O'Connor. 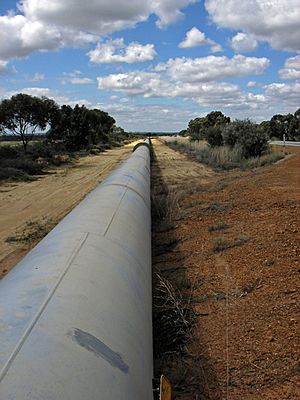 A section of the pipeline

The pipes were manufactured locally from flat steel sheets imported from Germany and the United States. Mephan Ferguson was awarded the first manufacturing contract and built a fabrication plant at Falkirk (now known as the Perth suburb of Maylands) to produce half of the 60,000 pipes required. C & G Hoskins established a factory near Midland Junction (now known simply as Midland) to produce the other half.

When built, the pipeline was the longest fresh-water pipeline in the world.

The pipeline ran alongside the route of the earlier route of the Eastern Railway and the Eastern Goldfields Railways for parts of its route, so that the railway service and the pipeline had an interdependence through the sparsely populated region between Southern Cross and Kalgoorlie.

The scheme required significant infrastructure in power generation to support the pumping stations. Communities oriented to the maintenance of the pipeline and pumping stations grew up along the route. However, with improved power supplies and modern machinery and automation, the scheme now has more unattended pumping stations operated by fewer people required to live along or close to the line. 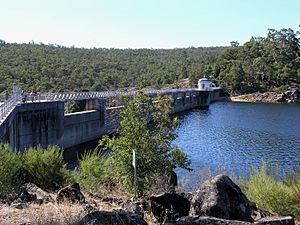 Construction of the dam started in 1898. When completed in 1902 it was claimed to be the highest overflow dam in the world.

Shortly after World War II, raising the wall was proposed and by 1951 the height of the dam wall was increased by 9.7 metres (32 ft).

The Public Works Department originally constructed and ran the railway from the Mundaring railway station for the purpose of delivering materials to the construction site.

The Western Australian Government Railways took over the railway operation. It ceased operation in 1952, and the connecting railway line at Mundaring closed in 1954.

The distance was compounded by the height the water had to be lifted. To rise the almost 400 metres (1,300 ft) in altitude, issues with friction meant that the head of 800 metres (2,600 ft) had to be achieved. O'Connor had eight pumping stations that pumped the water to the next of the receiving tanks in his plans. 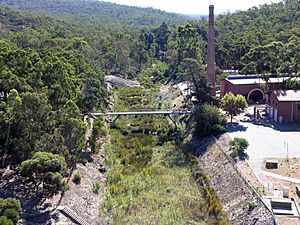 With most of the original stations being steam-driven, a ready supply of timber was needed to fire the boilers. The pipeline route was therefore closely aligned with the Eastern Railway. To enhance the reliability of the system, each pumping station was designed and constructed with a spare pumping unit. Due to pressure requirements related to the slope of the pipeline, stations one to four required two pumping units to be in operation. Stations five to eight only required one operating pump, due to a lower rise in height between those stations.

James Simpson and Co supplied 3,500 tonnes of equipment in 5,000 separate boxes for the construction of the pumping sets.

All the original pumping stations were powered by steam.

Branch mains – or extensions were started as early as 1907.

Water from the pipeline was utilised for a number of country towns adjacent to its route, and also into the Great Southern region. The Public Works Department started this project in the 1950s following the raising of the weir wall in the early 1950s and it completed this work in 1961.

The scheme was "interpreted" by the National Trust of Western Australia in its Golden Pipeline Project, which created guide books, web sites, and tourist trails along the scheme pipeline and tracing the older power station locations and communities that serviced the scheme. The Trust achieved the responsibility in an agreement with the Water Corporation in 1998. Most of the material was developed between 2001 and 2003.

In 2007 two items were produced that were overviews of the scheme:

The history of the construction of the Goldfields Water Supply Scheme was detailed in the 2007 documentary Pipe Dreams, which was part of the ABC series Constructing Australia.

The book River of Steel, by Dr Richard Hartley, won the Margaret Medcalf award of the State Records Office of Western Australia in 2008.

Lower Helena Pumpback dam is now also used to supply water to the Goldfields region. Water from the dam is currently pumped back into Mundaring Weir.

All content from Kiddle encyclopedia articles (including the article images and facts) can be freely used under Attribution-ShareAlike license, unless stated otherwise. Cite this article:
Goldfields Water Supply Scheme Facts for Kids. Kiddle Encyclopedia.