Merredin is a town in Western Australia, located in the central Wheatbelt roughly midway between Perth and Kalgoorlie, on Route 94, Great Eastern Highway. It is located on the route of the Goldfields Water Supply Scheme, and as a result is also on the Golden Pipeline Heritage Trail.

It is connected by public transport to Perth via the Prospector and MerredinLink rail services.

Merredin's history varies from that of other wheat-belt towns in Western Australia in the sense that it started as a stopping place on the way to the goldfields. The first European explorer into the area was the Surveyor General J. S. Roe, who travelled through the region in 1836 but was not impressed by its dryness and the low rainfall.

By the 1850s sandalwood cutters were in the area but there was little agriculture. It was not until Assistant Surveyor Charles Cooke Hunt explored the area in the period 1864–66 that it began to open up. Hunt saw the pastoral potential but realised the importance of water. He called the area Hampton Plains after John Stephen Hampton, Governor of Western Australia 1862–68.

Hunt made five journeys through the area. Of the five journeys the first was exploratory (1864), the second established a track which moved from waterhole to waterhole (1865) and the third built a series of wells and dams (the Hunt's Dam at Merredin is located about 10 kilometres north of town off the Merredin-Chandler Road). The result was a road which later became known as the York to Goldfields road and, until the arrival of the railway, was the only link between the coast and the gold towns of Kalgoorlie and Coolgardie.

It is almost certain that Hunt climbed Merredin Peak (a short distance out of town to the north) and that he heard the town's name from the local Aborigines. Hunt claimed that the local Aborigines referred to the place as "Merriding" while other explanations suggest that the name comes from "merrit-in" – "the place of the merrit" (merrit being a kind of tree which was used for making spears) – or that it was the name used by the Aborigines to describe the "huge bare granite rock" which the locals call Merredin Rock but which is officially named Merredin Peak.

In the late 1860s a number of large pastoral leases were taken up in the area but no township evolved. As late as 1889, when Assistant Surveyor Henry King set up camp on the north side of Merredin Rock, there was still no township. The first settlement was established to the north of Merredin Peak on the York to the Goldfields road but it was hastily moved when the railway, which could not follow the gradients of Hunts Road, was built a few kilometres to the south.

In 1888 the area to the east of Merredin was officially proclaimed a goldfield and over the next decade prospectors and fossickers poured through the area. Gold was discovered at Coolgardie in 1892 and at Kalgoorlie a year later. At first the prospectors used Hunt's waterholes road and this meant that they passed through the site of the modern town. In 1893 the narrow-gauge (3 ft 6 in) railway that was being continually extended Eastwards from Perth, reached the town. Merredin's importance as a town was directly related to the establishment of a superb water catchment scheme on Merredin Peak. The narrow-gauge railway was extended eastwards from Merredin to Southern Cross in July 1894, and to Kalgoorlie in January 1897.

A rock wall was built around the contours of Merredin Peak. It led to a 100 m channel which in turn led into a dam which had a storage capacity of 25 million litres. The scheme held every drop of water which landed on the Peak and directed it all into the dam which provided water for both the town and the railway. The entire structure is still intact and can be easily reached at the northern end of town. Constructed between 1893 and 1896, the Railway Dam ensured that Merredin would become much more than just another wheat-belt siding.

The need for the water from Merredin Peak disappeared in 1903 when C. Y. O'Connor's 565 km pipeline was completed. The pipeline joined the waterless goldfields at Kalgoorlie with the plentiful supplies of water in the Helena River east of Perth. Merredin Peak's Railway Dam continued to supply water to the railway until 1968 and even today is still used as the water supply for the fountain outside the Merredin Railway Museum and railway station.

In 1904 the Agricultural Research Station was established. It was here that the Bencubbin strain of wheat was developed. Land in the present townsite was offered for sale in 1906 and by 1911 the Merredin Roads Board had been formed.

Eric Hind was born in Nottingham in England in 1901. He migrated to Western Australia in 1926 and came immediately to the Wheatbelt. In 1928 he took up farming land at Burracoppin and so commenced a lifetime of interest in the Burracoppin Area. During the Second World War Eric enlisted in the R.A.A.F and served overseas. In 1953 he was elected to the then Merredin Road Board and continued to represent the people of Burracoppin on the Merredin Shire Council until his retirement in 1989. After 36 years of service on the Road Board and Shire Council, the Merredin Shire Council presented Eric with a long service award and made him a Freeman of the Shire. In 1990 he received the Order of Australia Medal for services to the community.

Eric Hind was an accomplished violinist who had gained his A.L.C.M (Eng) diploma before leaving England. As an active member of the Merredin Musical Society and Concert Orchestra of the day, Eric was much sought after as a violinist and was willing to perform at any function if possible. Eric also served on the local W.A Symphony Orchestra Committee and was instrumental in getting many concerts in Merredin over a number of years. In his honour, the Merredin Shire Council offers a music scholarship to the value of $1000.00.

During World War 2, Merredin was the location of RAAF No.26 Inland Aircraft Fuel Depot (IAFD), built in 1942 and closed on 14 June 1944. It was situated on Cummings Street and has since had a house built on top. Usually consisting of 4 tanks, 31 fuel depots were built across Australia for the storage and supply of aircraft fuel for the RAAF and the US Army Air Corps at a total cost of £900,000 ($1,800,000).

Merredin is located on the Eastern Goldfields Railway.

Merredin serves as the middle stop of the Prospector train. At Merredin, the train stops for a scheduled 10 minutes, giving passengers a chance to stretch their legs. There, the train stewards disembark and serve the Prospector going back to Perth, so they never go any farther. The same is true for Kalgoorlie stewards, who disembark and get onto the Kalgoorlie train. It is also the terminus for the Avonlink rural train service. 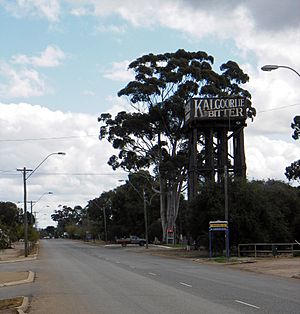 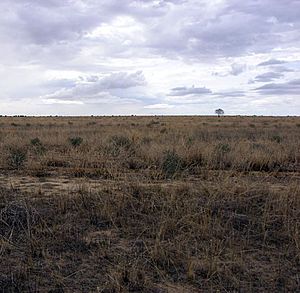 The agricultural land around Merredin produces 40% of Western Australia's wheat quota. As a focal point for the region, Merredin's local bulk handling co-operative receives and processes in excess of a million tonnes of grain every year. The silos at the train facilities to the west of the main town are the biggest of their type in the southern hemisphere.

One of the biggest problems to face the agricultural industry in Merredin is salinity. Extensive damage to buildings and roads is caused by rising saline groundwater. A recent study showed that the main source of this water is Merredin townsite itself. Roads, footpaths, buildings and open space have replaced native vegetation adapted to use up every drop of rain. Since the problem arose in the early 1970s, farmers and townspeople have been participating in a number of programs to improve the soil conditions, with some limited success. 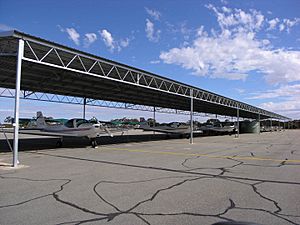 Merredin aerodrome is leased under a 100-year lease arrangement by China Southern West Australian Flying College (CSWAFC), a Western Australian Joint Venture Company owned by China Southern Airlines (PRC) and CAE Inc. (Canada) and was used as one of two pilot training facilities until September 2016. CSWAFC also operated, and continues to operate from Jandakot Airport in Perth. Merredin airport was leased for the sum of one Australian Dollar with the state government banking that investment would follow. The partnership in the years since has been successful. Upgraded facilities include bitumen runways, an operations viewing platform (which does not fulfil the regulatory requirements of a control tower), fire control equipment, hangars, classrooms, and housing. Although the aerodrome is leased by China Southern West Australian Flying College, the RFDS and private users still have access.

As of September 2016, the training school suspended operations in Merredin due to its inability to attract sufficient numbers of experienced staff with the appropriate regulatory approvals. Since then, issues have been raised over the leasehold arrangements.

The Aerodrome was put up for sale in June 2021.

The following people were either born or raised in Merredin.

All content from Kiddle encyclopedia articles (including the article images and facts) can be freely used under Attribution-ShareAlike license, unless stated otherwise. Cite this article:
Merredin, Western Australia Facts for Kids. Kiddle Encyclopedia.