York is the oldest inland town in Western Australia, situated on the Avon River, 97 kilometres (60 mi) east of Perth in the Wheatbelt, on Ballardong Nyoongar land, and is the seat of the Shire of York.

The name of the region was suggested by JS Clarkson during an expedition in October 1830 because of its similarity to his own county in England, Yorkshire.

After thousands of years of occupation by Ballardong Nyoongar people, the area was first settled by Europeans in 1831, two years after Perth was settled in 1829. A town was established in 1835 with the release of town allotments and the first buildings were erected in 1836.

The region was important throughout the 19th century for sheep and grain farming, sandalwood, cattle, goats, pigs and horse breeding.

York boomed during the gold rush as it was one of the last rail stops before the walk to the goldfields.

Today, the town attracts tourists for its beauty, history, buildings, festivals and art.

The Ballardong people, a sub-group of the Nyoongar, occupied the land before European settlement.

With the increasing population of the Swan River Settlement in 1830, it became evident that suitable land would have to be discovered for the growing of crops needed to provide necessary food.

Ensign Robert Dale, a 20-year-old officer of the 63rd Regiment, led a small party in the first exploratory journey over the Darling Range, during the winter months of 1830 into what was later to be known as the Avon Valley.

He returned with a report of "park-like lands with scattered trees", and after a second expedition, Lieutenant-Governor Stirling concluded that there appeared to be 1,000 square miles of "the finest imaginable sheep-land".

In September 1831 Dale escorted the first party of settlers to the district, reaching the Avon valley on 16 September. They immediately set about the construction of huts, the preparation required for their stock and the cultivation of new land. Dale proposed an area two miles south of the summit of Mt Bakewell as the site for a future town to serve the district.

In September 1833 a garrison of eight troops of the 21st North British Fusiliers was stationed at York. Rules and regulations for the assignment of town allotments at York were gazetted in September 1834 and allotments were advertised for sale from July 1835.

A township did not begin to appear until 1836. In July 1836 York comprised two houses, a barn, an army barracks and some out-houses, with about 50 acres of cleared land. The town grew slowly at first due to difficulties with the local aboriginals, as well as problems associated with using English farming techniques in an unfamiliar climate.

In 1831, Rivett Henry Bland settled in York, and with his business partner, Arthur Trimmer, leased a 10 acre site north of the town (on which they had built the first house, by the end of September 1831) and took a grant over a 4,000 acre block to the south which they established as a farm, later called Balladong Farm, after the Ballardong Noongar, the Aboriginal occupiers of the area. Later, part of the land to the south came to be called Bland's Town or Bland Town. Bland was resident magistrate from 1834 to 1842.

In 1836, John Henry Monger Snr arrived and bought the 10 acres of land immediately north of the town site from Bland and Trimmer for £100 on which the first house in York had been constructed of wattle and daub. Monger opened a hotel by early 1837, constructing in 1842 a "long, low building" opposite the hotel for a store, and “every three months his wagons would journey to Guildford or Perth for supplies”.

In July 1836 Lieutenant Henry William St Pierre Bunbury of the 21st Regiment was sent to York to respond to rising levels of violence between colonial settlers and Ballardong Noongar people. His mission was to "to make war upon the native". After many individual skirmishes and killings of Ballardong people, rumours of an attack on the natives, in which "several ... were wounded, and one woman was killed", were reported. In response to this, Ballardong people speared a shepherd called Knott. Bunbury initially tried to cover up Knott's death to avoid further conflict.

In July 1837 Bunbury was again sent to the York district after the spearing deaths of two young settlers called Chidlow and Jones. In the ensuing violence soldiers and settlers killed at least 18 Ballardong Noongar people.

In 1840, the York Agricultural Society was established, which became very influential in the following years, holding annual shows to the present day. The York Racing Club was established in 1843. Both societies continue today.

A shortage of labour was a problem for the farming community, particularly at harvest time. A sandalwood boom in the late 1840s lifted the town.

At the request of the influential York Agricultural Society, from 1851, convicts were transported to the Colony and relieved the labour shortages. As "ticket-of-leave" men, they constructed many of the early buildings.

Solomon Cook constructed a steam engine in 1852 to power his flourmill and this started a flourish of steam-powered flour mills in the town.

York was connected by rail in 1885. Following the discovery of gold in the Yilgarn in 1887, the town was teeming with miners, all alighting from the train and preparing to make the long journey across the plains to the goldfields.

In the 1880s the question as to whether or not the railway line to the Goldfields should be run through York or Northam was the subject of bitter debate. "Tradition is that State Parliamentarians became so tired of hearing the rival Notham/York arguments that they suggested that representatives of the two towns decide the issue by a game of cards." In December 1891, the State Government decided that the line should run through Northam because the distance to Yilgarn was 15 miles shorter and £500 cheaper.

The 1968 Meckering earthquake damaged a number of buildings and resulted in removal of the Royal Hotel.

Between 1968 and 1971, due to the general downturn in rural activities, and a progressive reduction in railway operations in favour of Northam, many York businesses closed and the population reduced to some extent.

Panoramic view of York and the Avon Valley from Mount Brown

York is located in the valley between Mt Bakewell and Mt Brown, known to the Ballardong Noongar as Walwalling and Wongborel. On the road to York in Spring are canola fields which draw many tourists.

In addition to its heritage and Arts and Crafts buildings and other architecture (refer below), the town features the York Motor Museum, the Courthouse complex, galleries, bric-à-brac and book shops, skydiving and paragliding, and walks along the picturesque Avon River and up Mt Brown.

The main attractions in the town include:

Shops of interest to visitors include:

The main attractions outside the town include:

In addition to the historic Faversham House, the York Post Office apartment, Hope Farm, and the Old York School and Farm House, there are many other charming places to stay. The town has four historic hotels: Settlers House, the York Palace Hotel, the Imperial Hotel and the Castle Hotel. Lavendale Farm offers farm stays.

The town is popular with walkers, cyclists, and photographers. Faversham House, Laurelville, the Imperial Hotel, the York Racecourse, and the Olive Branch provide a venue for weddings and small conferences or other corporate events, as does Lavendale Farm.

York offers a splendid wildflower garden behind Faversham House, as well as Avon Park, next to the town on the river, and Peace Park.

The York Agricultural Show and The York Festival are normally held in September and October each year. 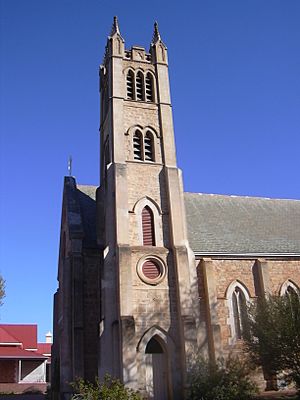 For a town of its size, there are more heritage buildings in York than in any other town in Western Australia. not only that, the entire town has been declared a "Historic Town" by the National Trust of Australia. The streets of York are lined with buildings both big and small that evoke the essence of the nineteenth century. The main street, Avon Terrace, remains almost exactly as it was in 1911, the year that the spectacular Town Hall was constructed. But behind the main street lie a wealth of historic houses and cottages and places of interest each with its own story and of the generation of people who lived in them.

Faversham House, overlooking the north end of Avon Terrace, is one of the grandest surviving Colonial homes in the State.

More than 200 buildings or sites in York are heritage listed, most within the town itself. Many of York's older homes and buildings have now been restored and, while some have retained their original use (e.g. the York Post Office), others have been adaptively re-used with success, such as the former York Primary School (1886).

Arts and Crafts buildings and other fine architecture

Federation Free Style buildings (the commercial equivalent of Arts and Crafts style) include the York Post Office (1893), the Courthouse and police station (c. 1896). All are designed by Temple-Poole and are on the State Heritage Register.

The centre of the town has fine examples of a dozen other Victorian and Federation architectural styles, virtually uninterrupted by modern buildings. The Victorian Georgian style buildings include the old sections of Settlers House and the Castle Hotel.

The Convent School House (1872) is a Victorian Tudor building, the same style as many of Perth's early buildings and also probably designed by Richard Roach Jewell.

The Catholic Presbytery is in Victorian Rustic Gothic style.

The coming of rail in 1885 brought the Victorian Filigree style Imperial Hotel (1886).

Gold rush buildings include the Federation Warehouse style York Flour Mill (1892), now a café and gallery, at the entrance to York and many of the buildings in Avon Terrace.

Most of the main street, Avon Terrace, has Victorian or Federation Free Classical buildings, including the Co-op (IGA) (1888 façade), the York Motor Museum, and Dinsdale's Shoe Emporium (1887) designed by Wright, with a cluster of Federation Romanesque buildings at the north end, including the former Fire Station (1897).

Early 20th century buildings include the stunning Federation Mannerist (or Edwardian Opulence) style Town Hall (also designed by Wright, and built in 1911), and an exemplar of Federation Filigree style, the Castle Hotel (1905), designed by William G Wolf, who designed His Majesty's Theatre. 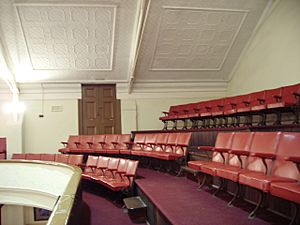 The York Visitor Centre is located in the Town Hall.

York is well serviced with all essential facilities, including York District High School for students from kindergarten to Year 10. The York Community Resource Centre enables access to tertiary education. There is a 24/7 medical service, the York District Hospital, library, and swimming pool.

York is in a temperate climate zone and experiences distinctly dry (and hot) summers and cool, wet winters. Under the Köppen climate classification, York has a Mediterranean climate.

Climate data has been recorded by the Bureau of Meteorology at York Post Office from 1877 to 1996, and another site from 1996 onwards.

A severe thunderstorm lashed the town and surrounding areas on 27 January 2011, resulting in roofs being ripped off, trees being uprooted and power lines being brought down. About 40 houses were damaged in the town as a result of the storm but no injuries were reported.

All content from Kiddle encyclopedia articles (including the article images and facts) can be freely used under Attribution-ShareAlike license, unless stated otherwise. Cite this article:
York, Western Australia Facts for Kids. Kiddle Encyclopedia.