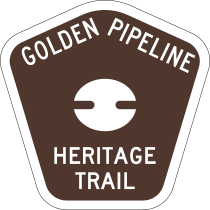 Golden Pipeline Heritage Trail (also known as the Golden Pipeline Drive Trail) was a project conducted by the National Trust of Western Australia along the Goldfields Water Supply Scheme pipeline at the time the pipeline was being celebrated for its 100 years of operation.

The project was involved in the creation of guide books, web sites and other materials on the actual trail.

The project was initiated in the late 1990s; further material was developed between 2001 and 2003, and included the Kep Track as part of the project.

Some communities along the trail have suffered due to change in agricultural decline, however most communities sustain museums or interpretative signage that give information about the pipeline's history.

As the heritage trail and working pipeline are continuing, considerable effort was expended to maintain and sustain the pipeline trail and its related sites (former pumping stations for example) over time.

The heritage trail achieved status on the Australian national heritage list in 2011.

The Golden Pipeline Heritage Trail is segmented into seven sections:

All content from Kiddle encyclopedia articles (including the article images and facts) can be freely used under Attribution-ShareAlike license, unless stated otherwise. Cite this article:
Golden Pipeline Heritage Trail Facts for Kids. Kiddle Encyclopedia.