Coolgardie is a small town in Western Australia, 558 kilometres (347 mi) east of the state capital, Perth. It has a population of approximately 850 people.

Although Coolgardie is now known to most Western Australians as a tourist town and a mining ghost town, it was once the third largest town in Western Australia (after Perth and Fremantle). At this time, mining of alluvial gold was a major industry and supplied the flagging economy with new hope. Many miners suffered under the harsh conditions, but for a few, their find made the hard work worthwhile. Most men, however, left poorer than they had started off, with their hopes dashed. 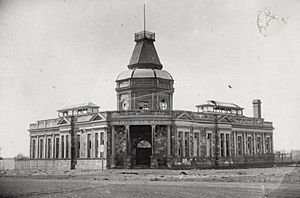 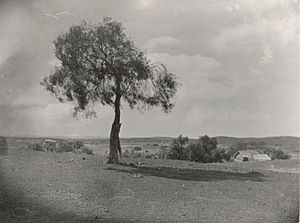 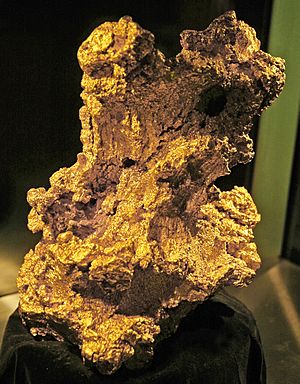 King of the West or Normandy Nugget, at 25.5kg the world’s second largest existing nugget, found in a creek bed at Coolgardie, 1995

The town was founded in 1892, when gold was discovered in the area. Australia had seen several major gold rushes over the previous three decades, mostly centred on the east coast, but these had mostly been exhausted by the 1890s. With the discovery of a new goldfield, an entire new gold rush began, with thousands flocking to the area. By 1898, Coolgardie was the third largest town in the colony, with an estimated population of 5,008 (3,151 men and 1,857 women). At its peak, 700 mining companies based in Coolgardie were registered with the London Stock Exchange. The town also supported a wide variety of businesses and services, including the railway connection between Perth and Kalgoorlie, a swimming pool (first public baths in the state), many hotels and several newspapers.

However, the gold began to decrease in the early 1900s, and by World War I, the town was in serious decline. The federal electorate was abolished in 1913 due to the diminished population, as many of its residents left for other towns where the gold was still plentiful, and it soon ceased to be a municipality. The situation remained unchanged throughout the century, as its population slipped to around 200 and it became a virtual ghost town. An example of this decline is that, in March 1896, Coolgardie's main street was lit by an electric light, but by April 1924, the same street was lit by four hurricane lamps.

Despite this, many of the buildings from the town's peak were retained, which in recent years has helped start a small revival in the town's fortunes. The development of a tourist industry has once again created some employment in the town, resulting in a small increase in population. Coolgardie appears to be no longer in danger of dying. 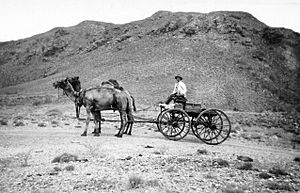 When the Coolgardie gold rush occurred in 1894, the Afghan cameleers (so-called, although they did not originate in Afghanistan) were quick to move in. The goldfields could not have continued without the food and water they transported. In March that year, a caravan of six Afghans, forty-seven camels and eleven calves, set out across the desert from Marree to the goldfield. It arrived in July with the camels, carrying between 135 and 270 kilograms each, in good condition. Another fifty-eight camels for Coolgardie arrived by ship in Albany in September. By 1898 there were 300 members of the Muslim community in Coolgardie and 80 on average attended Friday prayer. Coolgardie held the main Muslim community in the colony at that time. There was not one Muslim woman amongst them, no marriages were performed and no burials, reflecting a relatively young and transient population. Similar to the other structures, simple mud and tin-roofed mosques were initially constructed in the town. All of the Afghan Muslim population eventually relocated from Coolgardie generally to Perth, the new capital of Western Australia. Racism was very common towards the Afghan cameleers, there were reports of unsolved murders and torture of Afghan owned animals.

Great Eastern Highway (National Highway 94) runs through the town as Bayley Street. Just to the town's east, Highway 94 turns south onto Coolgardie-Esperance Highway, which heads towards Norseman, the starting point of the route east across the Nullarbor Plain.

Originally the narrow gauge railway to Kalgoorlie, the Eastern Goldfields Railway passed through Coolgardie, until 1968, when the new standard gauge line was built to the north on a new route.

The Transwa Prospector train stops 14 kilometres (8.7 mi) north of the town at Bonnie Vale. There is a very limited public bus service to the town on the Kalgoorlie to Perth route, although school bus services are more frequent.

In the 1890s there were four mining fields gazetted with Coolgardie as reference point:

Despite the changes to the Kalgoorlie region, Coolgardie still has a Mining Registrar.

All content from Kiddle encyclopedia articles (including the article images and facts) can be freely used under Attribution-ShareAlike license, unless stated otherwise. Cite this article:
Coolgardie, Western Australia Facts for Kids. Kiddle Encyclopedia.