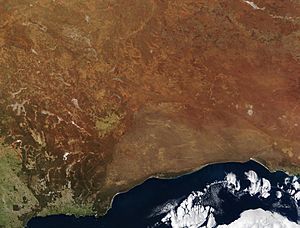 Nullarbor is the light tan semi-circular area near the coastline, 2002 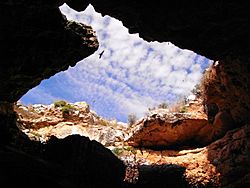 Murrawijinie cave system seen from inside. It is a karst system, formed by water running through the limestone. Murrawijinie means "bloody hands": the caves were used by indigenous people who left their ochre hand stencils on the cave walls

Nullarbor Plain (Latin: nullus, "no", and arbor, "tree") is an area of flat, dry land in southern Australia on the coastline of the Great Australian Bight.

It is the world's largest single piece of limestone, and occupies an area of about 200,000 square kilometres (77,000 sq mi). At its widest point, it stretches about 1,100 kilometres (684 mi) from east to west between South Australia (SA) and Western Australia (WA). The name comes from the Latin words meaning "no trees".

All content from Kiddle encyclopedia articles (including the article images and facts) can be freely used under Attribution-ShareAlike license, unless stated otherwise. Cite this article:
Nullarbor Plain Facts for Kids. Kiddle Encyclopedia.