Northam is a town in Western Australia, situated at the confluence of the Avon and Mortlock Rivers, about 97 kilometres (60 mi) east-northeast of Perth in the Avon Valley. At the 2011 census, Northam had a population of 6,580. Northam is the largest town in the Avon region. It is also the largest inland town in the state not founded on mining.

The area around Northam was first explored in 1830 by a party of colonists led by Ensign Robert Dale, and subsequently founded in 1833. It was named by Governor Stirling, probably after a village of the same name in Devon, England. Almost immediately it became a point of departure for explorers and settlers who were interested in the lands which lay to the east.

This initial importance declined with the growing importance of the nearby towns of York and Beverley, but the arrival of the railway made Northam the major departure point for prospectors and miners heading east towards the goldfields.

A number of older buildings have local heritage significance and still serve the community.

A severe thunderstorm lashed the town and surrounding areas on 27 January 2011 resulting in roofs being ripped off, trees being uprooted and power lines being brought down. About 50 houses were damaged in the town as a result of the storm but no injuries were reported.

During the 1940s and 1950s in Northam there were extensive camps for displaced persons and immigrants from continental Europe.

The Northam Migrant Accommodation Centre closed in September 1951. It had been the first place of residence in Western Australia for approximately 15,000 immigrants from the Baltic states, Hungary, Poland, Czechoslovakia, Italy, Yugoslavia, Ukraine, Belarus and Bulgaria. During the peak immigration period, Northam had the largest immigrant receiving facilities within the State and the third largest in Australia. By 1950, the camp housed 4,000 people and two new blocks of huts were built to accommodate them all. By May 1954, 23,000 migrants had passed through the Northam Camp once the Accommodation Centre had closed. A significant number of these post-war arrivals eventually settled in the Northam area.

On 18 October 2010 the Yongah Hill (YHIDC) centre was announced as being established at the former Northam Training Camp. It was not opened until early 2012, however, and, after it was downsized from the original 1500 expected occupancy, talk of expansion has been happening.

It is run by Serco for the Department of Immigration and Border Protection.

Northam has a Mediterranean climate with hot dry summers and cool wet winters. 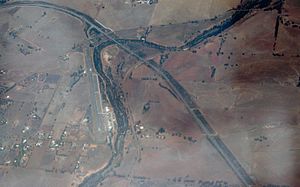 Northam airport, at the junction of Great Eastern Highway with Route 115, near the bridge over Mortlock River North

The town and hinterland of Northam are located in the Avon Valley - so named after the river the Avon River. It has been periodically flooded, and man-made banks protect the town from inundation. The Avon is a name commonly used by organisations, newspapers and sporting groups.

Burlong Pool a pool just south of the town was known as the Burlong swimming pool, and in the 1890s the location of the source of water for the Goldfields Water Trains

The Northam Flying 50's, a historical car racing event, is held each year in early April, attracting around 5,000 spectators.

The Northam Agricultural Show is held annually on a Friday and Saturday in mid-September.

The Kep Ultra running race is held each year on the Foundation Day long weekend in early June. The race starts in Northam and includes 100 km and 75 km events finishing at Mundaring Weir.

During World War I, Wilberforce, an area on the Spencers Brook to York Road was the area set up for the breeding and selection of horses to be transported to overseas theatres of war involving Australian horseman in particular the iconic 10th Light Horse Regiment.

Also in November 1920, an area at Noggojerrring was purchased by the Federal Government for £7,000. It was an area of 875 acres(350 hectares) of farming land and was located four miles (6.5 kilometres) north of Northam on the Northam - Pithara Road. Of that area, 860 acres (344 hectares) were cleared and divided into 11 paddocks. The property was well watered, and carried a wind mill, two dwellings, three sheds, and a stable. The Goomalling railway bisected it. The Federal Government's purpose was the settlement of tubercular soldiers. The place was christened Anzac Farm.

During World War II, Northam was the location of a number of important strategic military camps, depots and installations. Due to its strategic geographical location and being close to water, the Goldfields Water Supply Scheme, close to strategic railway junction, as it was close to the coast but inland, Northam became an important military hub.

The installations, camps, and depots were some of those developed in the Wheatbelt during 1939-1945, located within the Shire of Northam, some of which still exist today.

All content from Kiddle encyclopedia articles (including the article images and facts) can be freely used under Attribution-ShareAlike license, unless stated otherwise. Cite this article:
Northam, Western Australia Facts for Kids. Kiddle Encyclopedia.