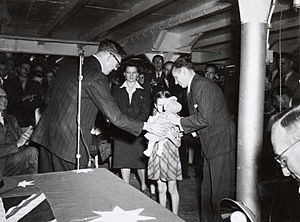 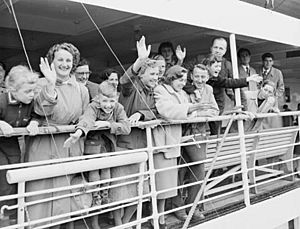 Post-war immigration to Australia deals with migration to Australia in the decades immediately following World War II, and in particular refers to the predominantly European wave of immigration which occurred between 1945 and the end of the White Australia policy in 1973. In the immediate aftermath of World War II, Ben Chifley, Prime Minister of Australia (1945–1949), established the federal Department of Immigration to administer a large-scale immigration program. Chifley commissioned a report on the subject which found that Australia was in urgent need of a larger population for the purposes of defence and development and it recommended a 1% annual increase in population through increased immigration.

The first Minister for Immigration, Arthur Calwell, promoted mass immigration with the slogan "populate or perish". Calwell coined the term "New Australians" in an effort to supplant such terms as pommy (Englishman) and wog.

The 1% target remained a part of government policy until the Whitlam Government (1972–1975), when immigration numbers were substantially cut back, only to be restored by the Fraser Government (1975–1982).

Some 4.2 million immigrants arrived between 1945 and 1985, about 40 percent of whom came from Britain and Ireland. 182,159 people were sponsored by the International Refugee Organisation (IRO) from the end of World War II up to the end of 1954 to resettle in Australia from Europe—more than the number of convicts transported to Australia in the first 80 years after European settlement. 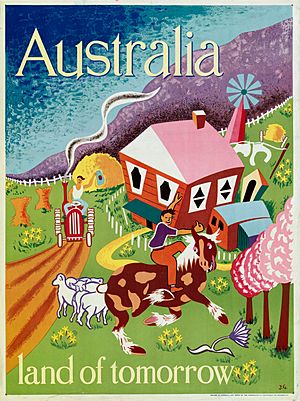 Australian Government poster displayed between 1949 and 1951 in reception rooms and dining halls at various migrant reception centres in Australia. (Image courtesy of the NAA).

Following the attacks on Darwin and the associated fear of Imperial Japanese invasion in World War II, the Chifley Government commissioned a report on the subject which found that Australia was in urgent need of a larger population for the purposes of defence and development and it recommended a 1% annual increase in population through increased immigration. In 1945, the government established the federal Department of Immigration to administer the new immigration program. The first Minister for Immigration was Arthur Calwell. An Assisted Passage Migration Scheme was also established in 1945 to encourage Britons to migrate to Australia. The government's objective was summarised in the slogan "populate or perish". Calwell stated in 1947, to critics of mass immigration from non-British Europe: "We have 25 years at most to populate this country before the yellow races are down on us."

The post-war immigration program of the Chifley Government gave them preference to migrants from Great Britain, and initially an ambitious target was set of nine British out of ten immigrants. However, it was soon apparent that even with assisted passage the government target would be impossible to achieve given that Britain's shipping capacity was quite diminished from pre-war levels. As a consequence, Calwell looked further afield to maintain overall immigration numbers, and this meant relying on the IRO refugees from Eastern Europe, with the USA providing the necessary shipping. Many Eastern Europeans were refugees from the Red Army and thus mostly anti-Communist and so politically acceptable.

The 1% target survived a change of government in 1949, when the Menzies Government succeeded Chifley's. The new Minister of Immigration was Harold Holt (1949–56).

The British component remained the largest component of the migrant intake until 1953. Between 1953 and late 1956, migrants from Southern Europe outnumbered the British, and this caused some alarm in the Australian government, causing it to place restrictions on Southern Europeans sponsoring newcomers and to commence the "Bring out a Briton" campaign. With the increase in financial assistance to British settlers provided during the 1960s, the British component was able to return to the top position in the overall number of new settlers.

Hundreds of thousands of displaced Europeans migrated to Australia and over 1,000,000 Britons immigrated with financial assistance. The migration assistance scheme initially targeted citizens of Commonwealth countries; but it was gradually extended to other countries such as the Netherlands and Italy. The qualifications were straightforward: migrants needed to be in sound health and under the age of 45 years. There were initially no skill requirements, although under the White Australia policy, people from mixed-race backgrounds found it very difficult to take advantage of the scheme.

Migration brought large numbers of southern and central Europeans to Australia for the first time. A 1958 government leaflet assured voters that unskilled non-British migrants were needed for "labour on rugged projects ...work which is not generally acceptable to Australians or British workers." The Australian economy stood in sharp contrast to war-ravaged Europe, and newly arrived migrants found employment in a booming manufacturing industry and government assisted programmes such as the Snowy Mountains Scheme. This hydroelectricity and irrigation complex in south-east Australia consisted of sixteen major dams and seven power stations constructed between 1949 and 1974. It remains the largest engineering project undertaken in Australia. Necessitating the employment of 100,000 people from over 30 countries, to many it denotes the birth of multicultural Australia.

In 1955 the one-millionth post-war immigrant arrived in Australia. Australia's population reached 10 million in 1959, up from 7 million in 1945.

In 1972, Whitlam Government (1972-1975) adopted a completely non-discriminatory immigration policy, effectively putting an end to the White Australia policy. However, the change occurred in the context of a substantial reduction in the overall migrant intake. During the Fraser Government (1975-1982) there was a final end to the White Australia policy but there was an increasing intake of Vietnamese refugees in the aftermath of the end of the Vietnam War, and Australia experienced the largest intake of Asian immigrants since the arrival of the Chinese gold miners during the gold rush of the 1850s and 60s. In 1983, the level of British immigration was below the level of Asian immigration for the first time in Australian history.

Financial assistance was an important element of the post war immigration program and as such there were a number of agreements in place between the Australian government and various governments and international organisations.

Breakdown of arrivals by decade

Since 1950 Australia has experienced average arrivals of around one million per decade, with the totals in the earlier decades being slightly above the totals in the more recent decades. Current statistics suggest that one million will be reached again in the current decade. The breakdown by decade is as follows:

In the 2006 census, birthplace was enumerated as was date of arrival in Australia for those not born in Australia. For the major post-war period non-English speaking immigrant groups enlarged by the arrival of immigrants to Australia after World War II, they are still major demographic groups in Australia:

Not all of those enumerated would have arrived as post-war migrants, specific statistics as at 2006 are not available.

All content from Kiddle encyclopedia articles (including the article images and facts) can be freely used under Attribution-ShareAlike license, unless stated otherwise. Cite this article:
Post-war immigration to Australia Facts for Kids. Kiddle Encyclopedia.