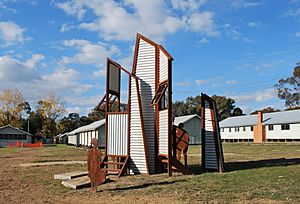 A sculpture commemorating the migrants who spent time at the Bonegilla camp. Some of Block 19 can be seen in the background. 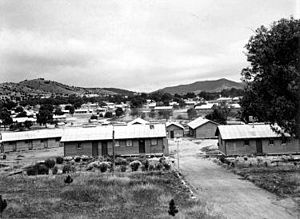 Block 4 of the camp while operational in 1954

The Bonegilla Migrant Reception and Training Centre was a camp set up for receiving and training migrants to Australia during the post World War II immigration boom. The camp was set on 130 hectares (320 acres) near Wodonga at the locality of Bonegilla in north east Victoria, between the Hume Dam and the city of Wodonga. The site was a former World War II Australian Army base, and is adjacent to the current Latchford Barracks. Before being requisitioned by the army, the site was originally a section of large pastoral land. The camp opened in 1947 and operated until 1971, over which period it received over 300,000 migrants. It is estimated that over 1.5 million Australians are descended from migrants who spent time at Bonegilla. Eric Bana's parents were both processed through Bonegilla. Other former residents include Karl Kruszelnicki, Franca Arena, Arvi Parbo, Les Murray and Raimond Gaita.

In the 24 years in which the camp operated, the estimated amount of arrivals was approximately 309,000. It remains the largest and longest-lasting migrant reception centre in post-war Australia. In 1945 the Australian Government, led by the ALP, actively sought to implement policies that would increase the natural population. This resulted in the opening of twenty holding centres and three reception centres (including Bonegilla) by 1951.

The Assisted Passage Scheme encouraged passage for British migrants in 1946. However, less than 7000 British citizens migrated during the period, which meant that the government instead turned to the displaced persons and war refugees (of which there were an estimated 1.6 million) in French, Austrian, and German camps. These migrants were granted passage under a two-year labour contract to be housed at the reception and training centres to adjust into the 'Australian way of life'.

The camp, with very basic facilities, was separated socially and geographically from nearby Albury and Wodonga and most residents were from non-English speaking nations. The camp was broken up into 24 blocks each with a kitchen, mess hut, and bath and toilet blocks. The site had an overall total of more than 800 buildings. The accommodation itself was in ex-Army unlined timber-framed buildings with corrugated iron walls. The rooms were designed to accommodate 20 people and contained no internal partitions. There was minimal done to prepare for the arrival of migrants in 1947. 47,000 beds were made available for non-British migrants across all reception centres by 1949. In 1947, Bonegilla had the capacity for less than 2,000 beds which increased to 7,700 by 1950. From 1951 onward, the internal walls were slowly lined and painted and cubicles installed, allowing some privacy. Upgrades to accommodation were sped up as the conditions were deemed inappropriate for incoming Dutch and British migrants. In 1955, these upgrades extended to the centre's sewer systems and the planting of trees for shade and windbreaks.

New arrivals generally docked at Port Melbourne and arrived by train at Bonegilla railway siding, where officials would receive them with a meal and accommodation. Migrants were separated and sectioned into blocks by nationality, and within these blocks men and women were segregated, even those that were married. Luggage and blankets were used as partitions to allow minor privacy and personal space. Recreational activities consisted of dance classes, a library, and swimming at Lake Hume. The Tudor Hall in Block 19 was used for dancing, and the cinema showed films twice weekly. Employment officers assessed the employability of migrants and allocated them to jobs Australia-wide. There was some minor allowance for the preferences of migrants, but consistent refusals of work offers could result in loss of social service benefits. Men were classified as 'labourers' and women as 'domestics'; many were frustrated by the ignorance of trade, professional, and skill qualifications and were expected to start work as simple labourers, though some received award wages.

Bonegilla hosted a majority of European migrants, as most British migrants were allocated to other urban centres. Within this European majority, many of the migrants were from non-English speaking countries. From 1947 until 1951, all migrants were from eastern and southern Europe. With the reintroduction of a passage migrant scheme with the Netherlands in February 1951, as well as the existing scheme with Britain from 1946 and a similar one with Italy in March 1951, the demographics of the camp shifted from strictly European.

In 2010, Bonegilla Migrant Experience Heritage Park was reopened for the public in partnership with the City of Wodonga, the Australian Government as a National Heritage Place, and the Albury Regional Museum Library. The Bonegilla Migrant Experience allows visitors to take guided tours of the remaining buildings, explore the history of the site as well as browse records concerning family history, and also organise educational tours for school groups. The relaunching of the park was driven by the Bonegilla Migrant Experience Advisory Committee, as well as the various ethnic community councils, the Victorian Multicultural Commission, State Heritage, the city councils of Wodonga and Albury, and the association of ex-Bonegilla residents led by the Greek community.

All content from Kiddle encyclopedia articles (including the article images and facts) can be freely used under Attribution-ShareAlike license, unless stated otherwise. Cite this article:
Bonegilla Migrant Reception and Training Centre Facts for Kids. Kiddle Encyclopedia.