Toodyay ( Noongar: Duidgee), known as Newcastle between 1860 and 1910, is a town on the Avon River in the Wheatbelt region of Western Australia, 85 kilometres (53 mi) north-east of Perth. The first European settlement occurred in the area in 1836. After flooding in the 1850s, the townsite was moved to its current location in the 1860s. It is connected by railway and road to Perth. During the 1860s, it was home to bushranger Moondyne Joe. 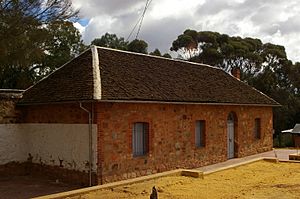 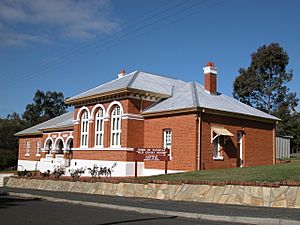 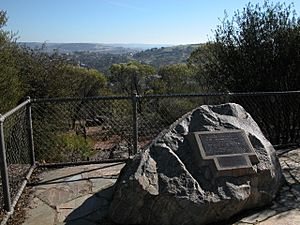 The original village of Toodyay was one of the earliest inland towns in Western Australia. A habitat of the Ballardong Noongar people for thousands of years, the Avon River valley was discovered by Ensign Robert Dale in 1830, leading to exploration by settlers including James Drummond, Captain Francis Whitfield and Alexander Anderson. The first village was established in 1836. Drummond established his homestead Hawthornden nearby. The original location is subject to flooding, which led to its abandonment in the 1850s, and a new townsite was established on higher ground 2 kilometres (1.2 mi) upstream. This was proclaimed by Governor Arthur Kennedy on 1 October 1860 as "Newcastle" and the original settlement came to be referred to as "Old Toodyay". In May 1910, due to confusion with the New South Wales city of Newcastle, a name-change to Toodyay was proposed and the original townsite, which had by this time declined substantially, became "West Toodyay".

The meaning of the name is uncertain, although it is Indigenous Noongar in origin — maps in 1836 referred to "Duidgee", while some believe it was named for a local woman named Toodyeep who accompanied early explorers in the area. The Shire of Toodyay's official history gives the meaning as "place of plenty". On the other hand, local anthropologists Ken Macintyre and Dr Barbara Dobson have postulated "that Duidgee most likely mimics a birdcall whose song once reflected the rich seasonal habitat of the bulrush-fringed pools and creek-lines of the Toodyay Valley", possibly the restless flycatcher or one of that family. According to Noongar belief, a bird calls its own name. This name "Duidgee" is preserved in the riverside recreation area "Duidgee Park".

Toodyay is also known as "the place that is misty and foggy".

The Newcastle Gaol, in Clinton Street, completed in 1864, was in use as a state prison until 1909. It is now preserved as a heritage building and tourist attraction, the Old Gaol Museum.

In 1870, a steam-driven flour mill, Connor's Mill, was built on Stirling Terrace by George Hasell. The mill was also used to generate electricity in the early twentieth century. Saved from demolition in the 1970s, and restored to demonstrate the milling process and machinery, the mill now forms the museum section of the Toodyay Visitor Centre.

The Heritage Council of Western Australia lists over one hundred places of historical significance in or near Toodyay, including cottages (some of which are now ruins), homesteads, shops, churches, parks and railway infrastructure. The State Register of Heritage Buildings includes the Gaol, Connor's Mill, Toodyay Public Library, the old Toodyay Post Office and the old Toodyay Fire Station, as well as several other historic sites. The historic architecture of shops and residences along the main street, Stirling Terrace, presents a distinctive frontage termed the Stirling Terrace Streetscape Group.

Some of the buildings are also listed on the Australian Heritage Database. They include the Freemasons Hotel, the Victoria Hotel, and Urwin's Store on Stirling Terrace, and Butterly's Cottage on Harper Road.

By the early 1920s Toodyay was being recognised for its potential to develop into a tourist destination, with ample accommodation, its link to WA colonial past, Moondyne Joe and the Newcastle Gaol as point of interest. Being an hour's drive from Perth, present day Toodyay is a popular venue for tourists. A picturesque circuit of Toodyay Road through Gidgegannup, Toodyay, Chittering Valley and Great Northern Highway attracts motorists. Other destinations include olive oil farms, lavender farms, holiday retreats, hotels, restaurants, caravan parks, an emu farm and a public archery park. 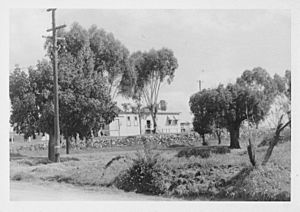 Historically, Newcastle was connected to the Western Australian Government Railways network by a line that left the Eastern Railway at Clackline, which then travelled through Western Toodyay to proceed to Bolgart and then on to Miling. This connection was changed when the Eastern Railway was re-routed through the Avon Valley in 1966. The Clackline connection was closed, and Toodyay became part of the main eastern railway route.

Toodyay railway station is currently served by Transwa AvonLink, MerredinLink and Prospector passenger trains on the route from Perth to Northam and Kalgoorlie.

Toodyay is connected to Perth by Toodyay Road, which runs in a south-westerly direction to Great Northern Highway in Middle Swan, Perth. Within Toodyay, it continues as the town's main street, Stirling Terrace. Other major roads radiating out from Toodyay are:

Toodyay is also the northern end of the Avon Historic Tourist Drive (Tourist Drive 254), which follows the Avon River to Beverley.

On 5 May 1947, a motor racing meeting took place, using the towns streets for the course. The circuit was in a clockwise direction, following the route Stirling Terrace (where the start and finish was located)-Henry Street-Duke Street-Fiennes Street-Templar Lane and back to Stirling Terrace. The main race of the meeting was the 30 mile Toodyay Speed Classic, which was won by Syd Barker. A second meeting was planned for 17 November 1948, to coincide with the King's Birthday holiday, but the holiday was cancelled, as was the race meeting.

Toodyay plays host to a leg of the Quit Targa West each year, normally on the Saturday of the event.

Toodyay is located on the Avon River, which runs through to the Swan River in Perth. The annual Avon Descent sees a range of crafts make their way downriver through Toodyay, from the starting point at Northam.

Toodyay has been impacted by fires – a common occurrence in the summer months – since it was settled. Significant bushfires have regularly been reported in the area from as early as 1853. Two of the most devastating fires to threaten Toodyay have resulted from state government infrastructure, along with other smaller fires, including the spontaneous combustion of a dung heap at the Newcastle Police Stables.

On 10 December 1909 a fire was started by a train using the newly opened Newcastle–Bolgart Railway near Coondle; the fire was referred to as the most disastrous that had ever occurred in the area. It burnt an area of about 15 miles in length and up to 4 miles wide. Three hundred and fifty people fought the fire over two days before putting it out. A later flare up caused further damage to 600 acres of land, 500 of which was on the property of Timothy Quinlan. Quinlan had been an advocate in 1906, when he was Speaker of the Western Australian Legislative Assembly, for the building of the line.

A major bushfire, blamed on collapsed power lines, broke out at about noon on 29 December 2009 after outdoor temperature had reached 45.4 °C (113.7 °F) and the "catastrophic" fire risk rating had been used for the first time in the state. Areas to the south, south-west and east of Toodyay were affected, with more than 3,000 hectares (7,410 acres) of forest burnt and 38 homes lost.

All content from Kiddle encyclopedia articles (including the article images and facts) can be freely used under Attribution-ShareAlike license, unless stated otherwise. Cite this article:
Toodyay, Western Australia Facts for Kids. Kiddle Encyclopedia.