Clackline is a locality in the Wheatbelt region of Western Australia, about 80 kilometres (50 mi) east-north-east of Perth.

John Forrest, later Premier of Western Australia, recorded the name Clackline in 1879 but the origin of the word is unknown. A settlement was established in the 1880s, being at the junction of the Perth-Newcastle Road and the township was gazetted in 1896.

It has also been known as Clackline Junction for the road and the rail junction.

Clackline is in the Wheatbelt region of Western Australia, about 80 kilometres (50 mi) east-north-east of Perth, and 17 kilometres (11 mi) south-west of Northam.

Clackline Brook is an 11.6-kilometre-long (7.2 mi) waterway, which runs from near Clackline towards Mokine, before turning north and ending near Mokine Hill.

In the 2011 census, Clackline had an estimated population of 331 people.

There are several historic sites, including heritage listed sites, located in and around the Clackline townsite.

The Avro Anson Memorial commemorates four Royal Australian Air Force (RAAF) airmen killed when their Avro Anson aircraft crashed near Clackline on 9 October 1942. The memorial site is located on the low side of Arvo Anson Road, in a small park approximately five kilometres (3.1 mi) south-east of Clackline. The memorial, assembled by members of the local community in the months following the crash, features a cairn of granite and boulders supporting a jarrah cross. The names and details of the deceased airmen − Flying Officer Lynton Birt, Sergeant Geoffrey Debenham, Sergeant Noel Nixon, and Sergeant Kenneth Hugo − are carved into the cross. Over the years, the memorial was forgotten and lost, overgrown by shrubs and trees. Upon its discovery in the early 1980s, the memorial's history and significance were researched, and it was restored in 1984 by volunteers from the Perth branch of the Royal Australian Air Force Association. Since then, the association has held annual memorial services at the site.

Clackline Bridge is a historic road bridge in Clackline that carried the Great Eastern Highway until 2008. It is the only bridge in Western Australia to have spanned both a waterway and railway, the Clackline Brook and the former Eastern Railway alignment. The mainly timber bridge has a unique curved and sloped design, due to the difficult topography and the route of the former railway. The bridge was designed in 1934 to replace two dangerous rail crossings and a rudimentary water crossing. Construction began in January 1935, and was completed relatively quickly, with the opening ceremony held in August 1935. The bridge has undergone various improvement and maintenance works since then, including widening by three metres (10 ft) in 1959–60, but remained a safety hazard, with increasing severity and numbers of accidents through the 1970s and 1980s. Planning for a highway bypass of Clackline and the Clackline Bridge began in the 1990s, and it was constructed between January 2007 and February 2008. The local community had been concerned that the historic bridge would be lost, but it remains in use as part of the local road network, and has been listed on both the Northam Municipal Heritage Inventory and the Heritage Council of Western Australia's Register of Heritage Places.

The Clackline Refractory is a heritage listed brickworks site in Clackline, located on Refractory Road in a valley near Great Eastern Highway. An abundant supply of fine quality clay was discovered in Clackline in 1898, which led to the establishment of a quarry and refractory. By 1901, the industry was important to Western Australia, with the brick products from Clackline used by multiple government departments, the Fremantle Gas Company, and many goldmines. Other users of the bricks included the Railway Department, the Perth Gas Company, the Fremantle smelter, and the Great Boulder Perseverance Company. The Clackline Refractory also supplied bricks for the nearby pumping stations for the Goldfields Water Supply Scheme. As of 2012[update], the site is in poor condition and mostly deserted, apart from stacks of various ceramic products. As well as kilns suitable for modern day production, the site has older kilns constructed from bricks, with corrugated iron roofs supported by metal poles. Alongside these structures is a large brick chimney. 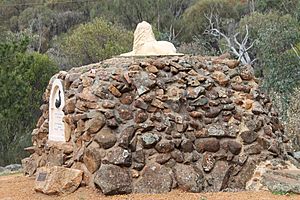 In 1929, Clackline School's students and headteacher, E.W.Membery commemorated the 100th anniversary of British colonisation by building a monument. The monument features a sculpture of a lion, with a plaque reading:

ERECTED by the PUPILS of CLACKLINE
to COMMEMORATE the CENTENARY
of the
BRITISH COLONISATION OF WEST
AUSTRALIA
MDCCCXXIX   MDCCCCXXIX A D.
E.W.MEMBERY. H.T.

The sculptor of the lion was Archie H Paton, who has since been recognised with a nearby plaque. It is a stopping point on the Kep Track, adjacent to a picnic area and toilets.

A restored rail carriage, serving as a museum, was installed by the now-defunct Clackline Railway Committee. The railway carriage has been used as a venue for community events, such as farmers markets and weddings. It is located south of Great Eastern Highway, opposite the general store, but a walking trail passing under the highway connects to the remains of the Clackline railway station.

The Clackline area produces some of the highest grade export hay (oaten) in Australia, and is home to wine growing ventures and an olive grove producing extra virgin olive oils.

Clackline historically had its own primary school, until the late 1970s. Clackline School, later known as Clackline Primary School, opened in 1896, and was extended and renovated several times before relocating in 1954 to a new site on the same road. The school was closed down in 1976, but in 1980 became the temporary location of the Avon Valley Church's school. Since then, the closest primary schools to Clackline are in Northam, Bakers Hill and Wundowie.

Clackline is reliant on the road network as the only available means of transportation. It is situated alongside Great Eastern Highway, which has bypassed the townsite since February 2008. The highway connects traffic south-west to Perth, and north-east to Northam and beyond. Other important roads in the area are Clackline–Toodyay Road, leading north to Toodyay, and Spencers Brook Road, heading south-east to Spencers Brook and then on to York.

All content from Kiddle encyclopedia articles (including the article images and facts) can be freely used under Attribution-ShareAlike license, unless stated otherwise. Cite this article:
Clackline, Western Australia Facts for Kids. Kiddle Encyclopedia.