As a young man, he won fame as an explorer by leading three expeditions into the interior of Western Australia, for which he was awarded the 1876 Royal Geographical Society's Patron's Medal.

He was appointed Surveyor General and in 1890 became the first Premier of Western Australia, its only premier as a self-governing colony. Forrest's premiership gave the state ten years of stable administration during a period of rapid development and demographic change. He pursued a policy of large-scale public works and extensive land settlement, and he helped to ensure that Western Australia joined the federation of Australian states.

After federation, he moved to federal politics, where he was at various times postmaster-general, Minister for Defence, Minister for Home Affairs, Treasurer and acting Prime Minister. He was affiliated with the Protectionist Party, the Western Australian Party, the Commonwealth Liberal Party, then the [[Nationalist Party of Australia].

Shortly before his death, Forrest was informed that the King had approved his elevation to the British peerage as Baron Forrest of Bunbury. 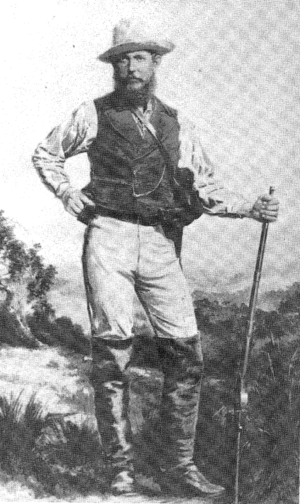 Forrest was one of 10 children of William and Margaret Forrest, who came out as servants under Dr John Ferguson in 1842. He was born at Preston point near Bunbury in what was then the British colony of Western Australia. Among his seven brothers were Alexander Forrest and David Forrest. He attended the government school in Bunbury under John Hislop until the age of 12, when he was sent north to Perth to attend the Bishop's Collegiate School, now Hale School, starting there in January 1860.

In November 1863, he was apprenticed to a government land surveyor named Thomas Carey. When his term of apprenticeship ended in November 1865, he became the first man born and educated in the colony to qualify as a land surveyor. He then commenced work as a surveyor with the government's Lands and Surveys Department.

On 2 September 1876 in Perth, Forrest married Margaret Elvire Hamersley. The Hamersleys were a very wealthy family, and Forrest gained substantially in wealth and social standing from the marriage. However, to their disappointment they had no children.

Forrest had been suffering from a cancer on his temple since early in 1917, and by 1918, he was very ill. He resigned as treasurer on 21 March 1918, and shortly afterwards boarded ship for London, where he hoped to obtain specialist medical attention. He also hoped to be able to take his seat in the House of Lords. However, on 2 September 1918, with his ship off the coast of Sierra Leone, he died. He was buried there, but his remains were later brought back to Western Australia and interred in Karrakatta Cemetery. 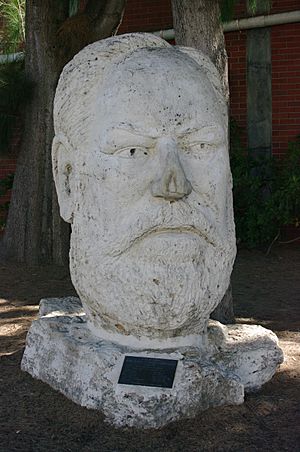 Forrest's legacy can be found in the Western Australian landscape, with many places named by or after him:

In addition, the electoral Division of Forrest was created in 1922; the suburb of Forrest, Australian Capital Territory is named after Forrest, as one of the many suburbs of Canberra named after Australia's first federal politicians.

He is one of many railroad builders featured as a possible computer-controlled competitor in the simulation game Railroad Tycoon 3.

On 28 November 1949, the Australian post office issued a commemorative stamp that featured Forrest.

The Lord Forrest Hotel opened in Bunbury in 1986 even though he was never correctly known by that name. It is still running today and proudly displays his pictures on the walls. It is the largest hotel in Bunbury.

All content from Kiddle encyclopedia articles (including the article images and facts) can be freely used under Attribution-ShareAlike license, unless stated otherwise. Cite this article:
John Forrest Facts for Kids. Kiddle Encyclopedia.