The port city of Bunbury is the third largest city in Western Australia after the state capital, Perth and Mandurah. It is situated 175 kilometres (109 mi) south of Perth's central business district (CBD).

Bunbury was first established in 1836, and was named in recognition of Lieutenant Henry William St Pierre Bunbury.

The city's administrative area, Greater Bunbury, includes four local government areas, and extends between Yarloop in the north, Boyanup to the south and Capel to the southwest.

The port of Bunbury services the farming, mining and timber industries of the south west.

The original inhabitants of Greater Bunbury are the Indigenous Australian Noongar people. The people hunted and fished throughout the sub-region prior to the first European settlement in the 1830s. 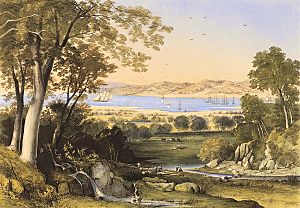 The first registered sighting of Greater Bunbury was by French explorer Captain Louis de Freycinet from his ship the Casuarina in 1803. He named the area Port Leschenault after the expedition's botanist, Leschenault de La Tour. The bay on Greater Bunbury's western shores was named Geographe after another ship in the fleet.

In 1829, Dr Alexander Collie and Lieutenant Preston explored the area of Bunbury on land. In 1830 Lieutenant Governor Sir James Stirling visited the area and a military post was subsequently established; it only lasted six months. The area was renamed Bunbury by the Governor in recognition of Lieutenant Henry William St Pierre Bunbury, who developed the very difficult inland route from Pinjarra to Bunbury. Bunbury township was mentioned in the Government Gazette in 1839, but lots in the township were not surveyed until 1841. In March 1841 lots were declared open for selection.

By 1842 Bunbury was home to 16 buildings including an inn. Thereafter, a growing port serviced the settlers and the subsequent local industries that developed.

One of the major industries to open up to cement the importance of Bunbury as a port was the timber industry. Timber logs would be floated down the Collie River to be loaded aboard ships headed to the Northern Hemisphere or to South Africa where the hardwood timbers were used for railway sleepers.

In 1884 the Government decided to construct a railway from Bunbury to Boyanup, 16 miles (26 km) long. When the line was completed in 1887, the contractor who had built it obtained a contract to control and work it, which he did with horses. The line was eventually taken over by the Government in 1891 and operated with locomotives. The inconvenience of a railway isolated from the capital gave rise to agitation and in 1893 the South Western Railway was constructed between East Perth and Picton, connecting Greater Bunbury and Perth. The Boyanup line was extended to Donnybrook, Western Australia in the same year. The railways connected the port of Bunbury to the coal and mineral deposits and agricultural areas to the north and east of Greater Bunbury.

In 1903 a breakwater to further protect the bay and port area was completed.

The Old Bunbury railway station served as the terminal for the Australind passenger train between Perth, transporting its first passengers on 24 November 1947. The last train to use the station departed on 28 May 1985 with a new station opening at East Bunbury, 4 kilometres (2 mi) to the south-east the following day. The railway land was then sold and Blair Street realigned.

Bunbury is situated 175 kilometres south of Perth, at the original mouth of the Preston River and near the mouth of the Collie River at the southern end of the Leschenault Inlet, which opens to Koombana Bay and the larger Geographe Bay which extends southwards to Cape Naturaliste.

In 2007 Bunbury was recognised as Australia's fastest growing city for the 2005/06 period by the Australian Bureau of Statistics.

The most common occupations in Bunbury (Significant Urban Areas) included Technicians and Trades Workers 20.4%, Professionals 15.0%, Clerical and Administrative Workers 12.9%, and Labourers 12.5%. In 2011 Bunbury had an unemployment rate of 4.9%.

A number of cultural organisations are located in Bunbury, including:

The Bunbury Historical Society is located in the historic King Cottage, which was built around 1880. In 1966 the cottage was purchased by the City of Bunbury and subsequently leased to the Society. The rooms of the cottage are furnished and artifacts displayed to reflect the way of life for a family in Bunbury in the period from the 1880s to the 1920s.

There are many tourism and recreational opportunities in Bunbury. Some of the most popular attractions include

It is also very close to the Ferguson Valley.

There are a number of sporting clubs in Greater Bunbury.

All content from Kiddle encyclopedia articles (including the article images and facts) can be freely used under Attribution-ShareAlike license, unless stated otherwise. Cite this article:
Bunbury, Western Australia Facts for Kids. Kiddle Encyclopedia.