Donnybrook is a town situated between Boyanup and Kirup on the South Western Highway, 210 kilometres (130 mi) south of Perth, Western Australia. The town is the centre of apple production in Western Australia. The town is also known for its picturesque abundance of English Oak trees, as well as for the Apple Fun Park, a large outdoor playground in the centre of town.

The town of Donnybrook was gazetted in 1894. It was first settled around 1842 when George Nash and others moved to the area. They named the place "Donnybrook" after the suburb of Dublin, Ireland that they came from. The eastern part of the town was formerly called Minninup. The western portion of the townsite is currently known as Irishtown.

In 1897, Richard Hunter discovered gold about 6 kilometres south of the Donnybrook townsite. Hunter eventually sold out to Fred Camilleri (a well known prospector from Kalgoorlie) and Camilleri was able to interest the internationally renowned Polish geologist Modest Maryanski. It was on the basis of Maryanski's report that a new company "Donnybrook Goldfields Ltd" was floated on the London Stock Exchange in 1899. A mini gold rush occurred, resulting in the Government gazetting the Donnybrook Goldfield - in the process making provision for a new town to be called "Goldtown". From the census of 1901, it was known over 200 gold miners were camped on the goldfields. The excitement was short-lived however, and the Hunters Venture mine closed in August 1903. The area was worked during the Great Depression by locals Laurie and Foster Payne, then re-pegged and explored during the 1980s and again from 2004-5. 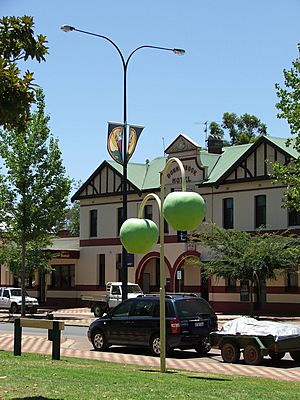 Donnybrook has many town icons bearing the apple. On the main street, apple-shaped lights line the entrance of the Old Railway Station. These lights have recently been restored. Atop the east Donnybrook hill is a 20-metre-high (66 ft) tower with an apple at the top. The apple is part of The Big Apple Tourist & Wildlife Park, and from the top of the apple, visitors can view Donnybrook and its surrounding areas. The Lady William big apple is made of fibreglass and is 7.5 metres tall with a diameter of 6.5 metres, making it one of Australia's "Big Things".

The Apple FunPark, the largest free-entry playground in Australia, opened in Easter 2008 in time for the Donnybrook Apple Festival. The fruit-themed park has play equipment and an adult exercise area.

The Old Goldfields Orchard & Cider Factory houses a small museum that documents the rise and fall of the goldfield. The Hunters Venture poppet head has been re-built above the original mine shaft, and the Mount Cara adit is open for tourists' inspection. 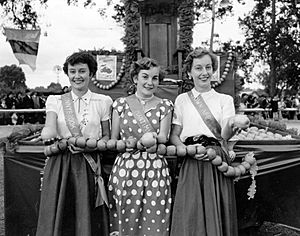 Finalists in the 1954 Apple Queen competition from Donnybrook, Manjimup and Bridgetown

The Donnybrook Apple Festival is held annually (originally every two years) during Easter. During the apple festival, the citizens of Donnybrook gather at Egan Park to celebrate the apple. The festival includes agricultural displays, sideshow alley, the crowning of the Apple Queen and a parade. During the street parade the Catholic Church of Donnybrook blesses the holy apple, assuring a good harvest in the years to come.

The Apple Queen was traditionally chosen from young females from the Donnybrook/Balingup area, aged between 17 and 25 years. In 2006, this was changed to the title of "Ambassador", with males allowed to enter the competition. Contestants attend dinners and perform community service, and ride on giant apple-shaped floats in the parade. From these floats they give apples, fruit and lollies to the children lining the closed-off section of the South Western Highway.

The Apple Festival also had a mascot, Donny Applebrook, created in 1997. Donny was a giant green apple who promoted the festival.

Donnybrook is home to Australia's largest known English Oak. The tree, believed to originate from 1893 is a landmark within the town. There is also a time capsule under this tree

All content from Kiddle encyclopedia articles (including the article images and facts) can be freely used under Attribution-ShareAlike license, unless stated otherwise. Cite this article:
Donnybrook, Western Australia Facts for Kids. Kiddle Encyclopedia.