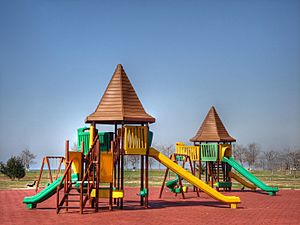 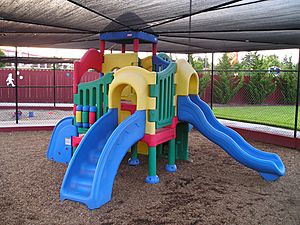 A playground, playpark, or play area is a place specifically designed to enable children to play there. It is typically outdoors. While a playground is usually designed for children, some target other age groups or people with disabilities. A playground might exclude children below a certain age.

Modern playgrounds often have recreational equipment such as the seesaw, merry-go-round, swingset, slide, jungle gym, chin-up bars, sandbox, spring rider, trapeze rings, playhouses, and mazes, many of which help children develop physical coordination, strength, and flexibility, as well as providing recreation and enjoyment and supporting social and emotional development. Common in modern playgrounds are play structures that link many different pieces of equipment.

Playgrounds often also have facilities for playing informal games of adult sports, such as a baseball diamond, a skating arena, a basketball court, or a tether ball.

A type of playground called a playscape is designed to provide a safe environment for play in a natural setting. 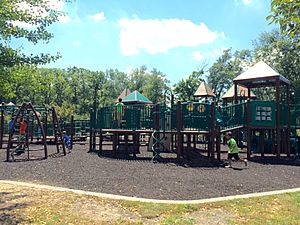 The playground at Van Saun Park in Paramus, New Jersey.

Through history, children played in their villages and neighbourhoods, especially in the streets and lanes near their homes.

In the 19th century, developmental psychologists such as Friedrich Fröbel proposed playgrounds as a developmental aid to give children a sense of fair play and good manners. In Germany, a few playgrounds were erected in connection to schools, and the first purpose-built public-access playground was opened in a park in Manchester, England in 1859.

However, it was only in the early 20th century, as the street lost its role as the default public space and became reserved for use by motor cars, that momentum built to remove children from the new dangers and confine them to segregated safe areas to play.

In the United States, the Outdoor Recreation League provided funds to erect playgrounds on parklands.

In tandem with the new concern about the danger of roads, educational theories of play, showed that playgrounds had educational value, improved attention in class, enhanced physical health, and made children want to come to school. 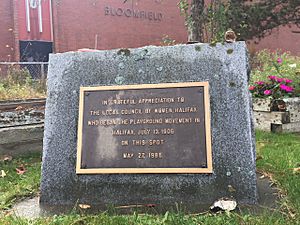 Plaque to mark the spot where the Playground movement began in Nova Scotia (1906), Local Council of Women of Halifax, Nova Scotia

One of the first playgrounds in the United States was built in San Francisco's Golden Gate Park in 1887. 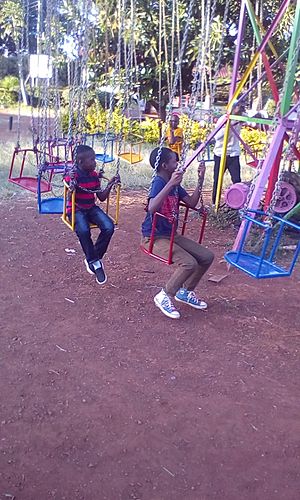 City streets are unsatisfactory playgrounds for children because of the danger, because most good games are against the law, because they are too hot in summer, and because in crowded sections of the city they are apt to be schools of crime. Neither do small back yards nor ornamental grass plots meet the needs of any but the very small children. Older children who would play vigorous games must have places especially set aside for them; and, since play is a fundamental need, playgrounds should be provided for every child as much as schools. This means that they must be distributed over the cities in such a way as to be within walking distance of every boy and girl, as most children can not afford to pay carfare.

In post war London the landscape architect and children's rights campaigner Lady Allen of Hurtwood introduced and popularised the concept of the ’junk playground’ - where the equipment was constructed from the recycled junk and rubble left over from the Blitz. She campaigned for facilities for children growing up in the new high-rise developments in Britain's cities and wrote a series of illustrated books on the subject of playgrounds, and at least one book on adventure playgrounds, spaces for free creativity by children, which helped the idea spread worldwide.

Playgrounds in the Soviet Union

Playgrounds were an integral part of urban culture in the USSR. In the 1970s and 1980s, there were playgrounds in almost every park in many Soviet cities. Playground apparatus was reasonably standard all over the country; most of them consisted of metallic bars with relatively few wooden parts, and were manufactured in state-owned factories. Some of the most common constructions were the carousel, sphere, seesaw, rocket, bridge, etc.

Playground design is influenced by the intended purpose and who is going to use it. Separate play areas might be offered for very young children. A park that offers multiple play areas is used equally by boys and girls. 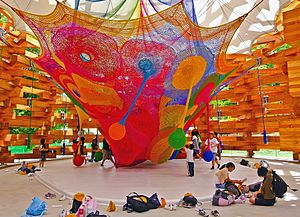 Professionals recognize that the social skills that children develop on the playground often become lifelong skill sets that are carried forward into their adulthood. Free, spontaneous play, the kind that occurs on playgrounds, is the most beneficial type of play.

Exciting, engaging and challenging playground equipment is important to keep children happy while still developing their learning abilities. These should be developed in order to suit different groups of children for different stages of learning, such as specialist playground equipment for nursery & pre-school children teaching them basic numeracy & vocabulary, to building a child's creativity and imagination with role play panels or puzzles.

There is a general consensus that physical activity reduces the risk of psychological problems in children and fosters their self-esteem. It's also a great way for children to exercise. Playgrounds provide an ideal opportunity for children to master physical skills, such as learning to swing, balance and climb. Personal development may be gained through the enhancement of skills, such as playing, communicating and cooperating with other children and adults in the playground.

Seesaw with a crowd of children playing 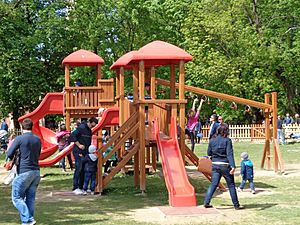 A type of playground called a playscape can provide children with the necessary feeling of ownership that Moore describes above. Playscapes can also provide parents with the assurance of their child's safety and wellbeing, which may not be prevalent in an open field or wooded area. 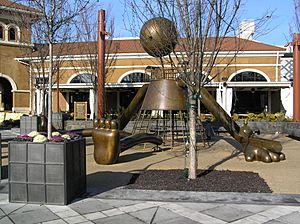 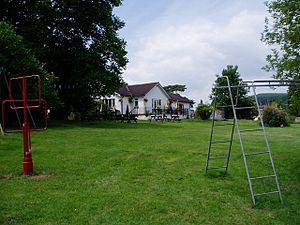 Safety, in the context of playgrounds, is generally understood as the prevention of injuries. It is important that children gradually develop the skill of risk assessment, and a completely safe environment does not allow that. For example, an older jungle gym might be constructed entirely from steel bars, while newer ones tend to have a minimal steel framework while providing a web of nylon ropes for children to climb on. Playgrounds with equipment that children may fall off often use rubber mulch or bark chips on the ground to help cushion the impact.

Playgrounds are also made differently for different age groups. Often schools have a playground that is taller and more advanced for older schoolchildren and a lower playground with less risk of falling for younger children. 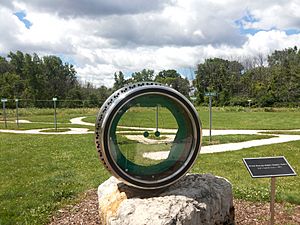 The "proton playground" at Fermilab includes a Bubble Chamber model and encourages children to follow a path resembling protons in a collider. 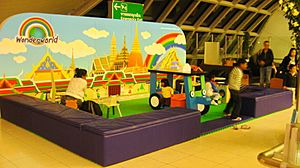 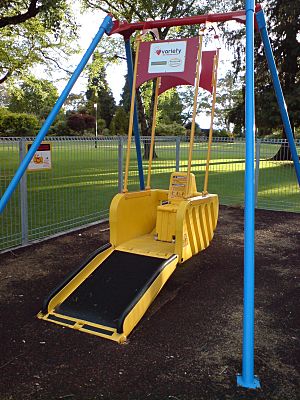 Universally designed playgrounds are created to be accessible to all children. There are three primary components to a higher level of inclusive play:

Some children with disabilities or developmental differences do not interact with playgrounds in the same way as typical children. A playground designed without considering these children's needs may not be accessible or interesting to them.

Most efforts at inclusive playgrounds have been aimed at accommodating wheelchair users. For example, rubber paths and ramps replace sand pits and steps, some features are placed at ground level and wheelchair-enabled swings. Efforts to accommodate children on the autism spectrum, who may find playgrounds overstimulating or who may have difficulty interacting with other children, have been less common.

"Natural playgrounds" are play environments that blend natural materials, features, and indigenous vegetation with creative landforms to create purposely complex interplays of natural, environmental objects in ways that challenge and fascinate children and teach them about the wonders and intricacies of the natural world while they play within it.

All content from Kiddle encyclopedia articles (including the article images and facts) can be freely used under Attribution-ShareAlike license, unless stated otherwise. Cite this article:
Playground Facts for Kids. Kiddle Encyclopedia.