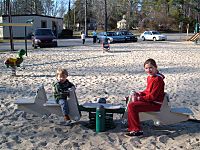 A boy and a girl playing on a seesaw.

A seesaw (also known as a teeter-totter) is a long, narrow board which is fixed in the middle, a little way above the ground. When one end of the seesaw goes up the other goes down.

Children often like to play on seesaws. Two children sit on the seesaw, one at each end. The child who is down pushes the ground with his feet so that he goes up and his friend goes down. Then the friend pushes up so the first child goes down. They continue to go back and forth until they are ready to stop playing on the seesaw.

It works best with two children who are about the same size, or else the heavy person will make his end stay down. On some seesaws there is room for two or three children on each end. There is a handle for each child to hold on to so that they do not fall off.

In mechanics (a kind of physics) anything that is balanced in the middle and goes up and down like a seesaw might be described as something that "seesaws".

It is believed that Korean girls in the 17th century who were not allowed beyond the confines of their courtyard walls invented the seesaw to catapult themselves in the air high enough to glimpse the outside world. There are no explicit references to the playground contraption before the 17th century. Another theory on the origin of the seesaw that appears in The Oxford Book of Nursery Rhymes involves children borrowing a plank and a log from the local sawyers to rock up and down on for play.

All content from Kiddle encyclopedia articles (including the article images and facts) can be freely used under Attribution-ShareAlike license, unless stated otherwise. Cite this article:
Seesaw Facts for Kids. Kiddle Encyclopedia.