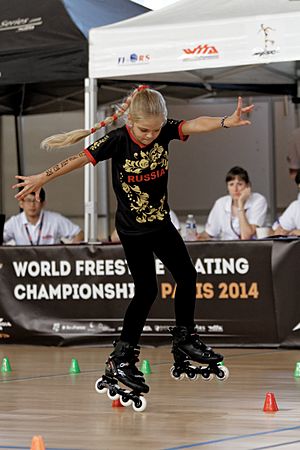 The wheels on roller skates are laid out similar to a skateboard, containing a set of trucks and cushions to allow for turning. 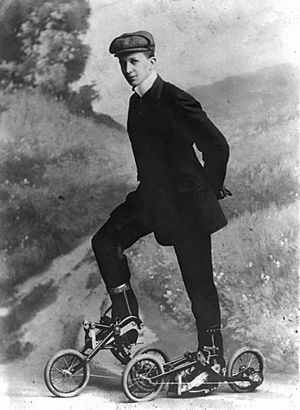 Young man on the Edvard Petrini's pedaled roller skates, known as Takypod in Sweden, circa 1910

Roller skating has had a checkered past over its nearly-three century history. Given its ebb and flow of popularity over the past century, writers labeled each generation's attraction a "craze!" The caption in a 1904 Decatur newspaper read, "Old Craze Comes Back," adding, "Roller skating promises to be as popular as it was twenty years ago." Reported on 11 October 1904, the statement announced the opening events of a new Decatur, Illinois roller rink. In 1906, with the opening of another Chicago rink, the Inter Ocean newspaper complained that "after twenty years of exemption from the affliction the desire to roll is again taking possession of American adults...the mania has struck Chicago!"

Nearly forty years later, Charlie Tyler would write, "This current roller skating 'craze' is nothing new." Tyler wrote for Chicago's Herald-American in September 1941 and described the opening of Chicago's Madison Gardens Rink's thirty-fifth season on the eve of World War II. Tyler was referring to the first roller skate craze at the turn of the twentieth century, when ball bearings revolutionized roller technology and roller skaters staged spectacle events and speed-skating marathons. Clamp-on skates were mass-produced for those with great aspirations. Tyler's reporting attempted to temper the rebirth of enthusiasm for the new roller styles that had become popular, including roller derby and dancing on rollers, suggesting that we had seen this before.

Today, the acceptance for roller skating is not unlike a waning moon but the sport persists. Roller skating continues to thrive as a part of pop culture in the form of recreation for leisure, dance and sport. Rollers, past and present are diehards. 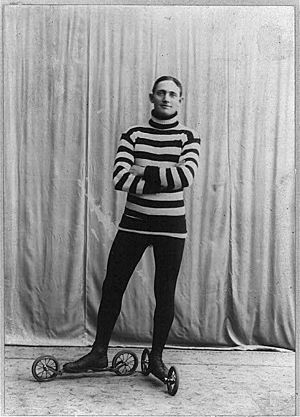 Roller skates in the United States around 1905 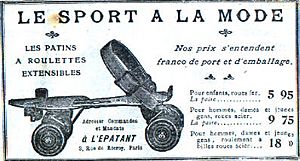 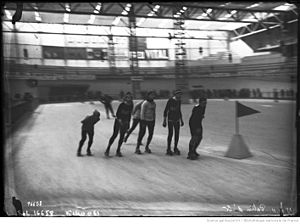 A 24-hour roller skating endurance competition in Paris, held in 1911 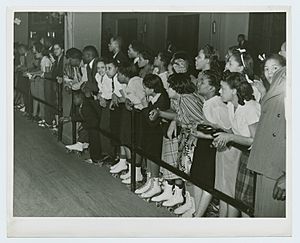 A crowd of roller skaters watch an exhibition in Chicago in 1939.

During the late 1980s and early 1990s, the Rollerblade-branded skates became so successful that they inspired many other companies to create similar inline skates, and the inline design became more popular than the traditional quads. The Rollerblade skates became synonymous in the minds of many with "inline skates" and skating, so much so that many people came to call any form of skating "Rollerblading," thus making it a genericized trademark.

For much of the 1980s and into the 1990s, inline skate models typically sold for general public use employed a hard plastic boot, similar to ski boots. In or about 1995, "soft boot" designs were introduced to the market, primarily by the sporting goods firm K2 Inc., and promoted for use as fitness skates. Other companies quickly followed, and by the early 2000s the development of hard shell skates and skeletons became primarily limited to the Aggressive inline skating discipline and other specialized designs.

The single-wheel "quintessence skate" was made in 1988 by Miyshael F. Gailson of Caples Lake Resort, California, for the purpose of cross-country skate skiing and telemark skiing training. Other experimental skate designs the years have included two wheeled (heel and toe) inline skate frames but the vast majority of skates on the market today are either quad or standard inline design. 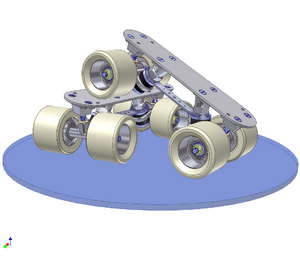 Artistic roller skating is a sport which consists of a number of events. These are usually accomplished on quad skates, but inline skates may be used for some events. Various flights of events are organized by age and ability/experience. In the US, local competitions lead to 9 regional competitions which led to the National Championships and World Championships.

A prescribed movement symmetrically composed of at least two circles, but not more than three circles, involving primary, or primary and secondary movements, with or without turns. Figures are skated on circles, which have been inscribed on the skating surface.

In competition skaters can enter more than one event;

Solo Dance; solo dance a competition starts at tiny tot and goes up to golden, for a test it starts with bronze and goes up to gold. You do not have to take tests anymore to skate in harder categories, you must have a couple of tests once you get to a certain event, though. In competition, these dances are set patterns and the judges give you marks for good edges, how neat they look and how well they do turns, etc.

Team Dance; this is where two people skate together doing the set dances. Most people skate with a partner the same ability and age.

Skaters are judged by the accuracy of steps that they skate when performing a particular dance. In addition to being judged on their edges and turns, skaters must carry themselves in an elegant manner while paying careful attention to the rhythm and timing of the music.

Freestyle roller dancing is a style of physical movement, usually done to music, that is not choreographed or planned ahead of time. It occurs in many genres, including those where people dance with partners. By definition, this kind of dance is never the same from performance to performance, although it can be done formally and informally, sometimes using some sparse choreography as a very loose outline for the improvisation.

A team of skaters (usually counted in multiples of four) creates various patterns and movements to music. Often used elements include skating in a line, skating in a box, "splicing" (subgroups skating towards each other such that they do not contact each other), and skating in a circle. The team is judged on its choreography and the ability to skate together precisely, and jumps and spins are not as important. In this category, they are classified as "small groups" (6 to 15 people) or "big groups" (16 to 30 skaters). These show groups are also divided due to the level and ages.

A single skater or a pair of skaters present routines to music. They are judged on skating ability and creativity. Jumps, spins and turns are expected in these events. Sometimes with a pair or couple skaters slow music will play, and usually it is two songs.

Speed skating originally started on traditional roller skates, quads or four wheels per skate. The first organized, national competition was held in 1938 in Detroit Michigan at the Arena Gardens Roller Rink, once home of "Detroit's Premier Sports Palace. The Arena opened in 1935 as roller skating began its ascension as a top sport. In the early years, competitors representing the mid-west states, primarily Illinois, Indiana, Michigan and Ohio dominated the sport. By 1950 as rinks hired speed skating coaches who trained competitors, the east and west coast began to compete effectively for the national titles. But in the early years, national titles were dominated by Chicago, Detroit, Cleveland and Cincinnati.

As rules were established for state and national competitions, the speed skating season began in fall and continued through spring leading up to a state tournament. Eventually approximately 1947, due to the growth of speed skating, the top three places at a state tournament would qualify skaters for a regional tournament. The top three places at regional tournaments then went on to compete at a national tournament. Skaters could qualify as individuals or as part of a two-person or four-person (relay) team. Qualification at regional events could warrant an invite to the Olympic Training Center in Colorado Springs, CO for a one-week training session on their outdoor velodrome. Inline speed skating is a competitive non-contact sport on inline skates. Variants include indoor, track and road racing, with many different grades of skaters, so the whole family can compete. 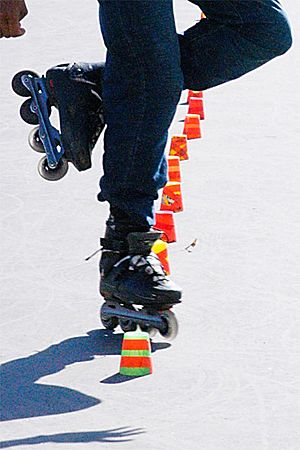 Among skaters not committed to a particular discipline, a popular social activity is the group skate or street skate, in which large groups of skaters regularly meet to skate together, usually on city streets. Charity skates in Paris have attracted 50,000 participants (the yearly Paris-Versailles skate). The current Official Guinness World Record holder is Nightskating Warszawa (Poland) with 4013 participants in 19 June 2014, but their real record from 25 April 2015 is 7303 participants and over 38 000 skaters total in 10 events in season 2015.

Aggressive inline skating is trick-based skating. This is where the individual performs tricks using a slightly different skate to normal. The skate has a grind block in between two wheels and the various companies have designed the boots to take these extra strains. Also the wheels have a flat large contact surface for grip.

Aggressive inline can either take place at a skate park or on the street. Typically predominantly grinds but also air tricks such as spins and flips.

Roller hockey is the overarching name for a rollersport that existed long before inline skates were invented, and thus has various names. Quad skate roller hockey has been played in many countries worldwide, and was a demonstration rollersport in the 1992 Summer Olympics in Barcelona. Other variations include skater hockey, played with a plastic ball, and inline hockey.

Roller derby is a team sport played on roller skates on an oval track. Originally a trademarked product developed out of speed skating demonstrations, the sport underwent a revival in the early 2000s as a grass-roots-driven, five-a-side sport played mainly by women. Most roller derby leagues adopt the rules and guidelines set by the Women's Flat Track Derby Association or its open gender counterpart, Men's Roller Derby Association, but there are leagues that play on a banked track, as the sport was originally played from the 1930s. 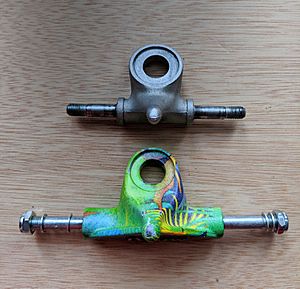 Otherwise known as "park skating" this form of roller skating involves performing tricks and airs in mini ramps, street, vert, and bowls. Any roller skate can be used for park skating though many skaters prefer a higher-ankle boot over speed style boot. Additional modifications to traditional rollers skates include the addition of a plastic block between the front and rear trucks commonly called slide blocks or grind blocks. The front and rear trucks can also be modified to use a 3-inch wide truck to allow for different tricks.

Roller skating, like skateboarding, has created a number of spin-off sports and sports devices. In addition to rollerblades/inline skates, there have also been:

All content from Kiddle encyclopedia articles (including the article images and facts) can be freely used under Attribution-ShareAlike license, unless stated otherwise. Cite this article:
Roller skating Facts for Kids. Kiddle Encyclopedia.