Roller derby is a sport played on roller skates. It used to be played by both men and women, but it was restarted by women. There are now a growing number of men's and mixed (or co-ed) teams around the world who are playing roller derby. 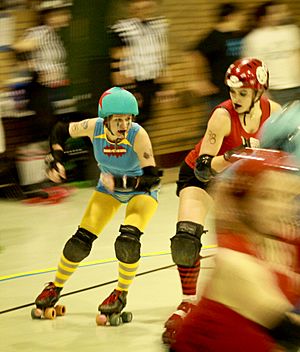 For a long time, many people did not believe roller derby was a real sport. They thought it was like professional wrestling, because it had fake fighting and other things for TV. But in 2002, a group of women in Austin, Texas started playing it as a real game, with nothing fake. A TV show called Rollergirls was made about some of these women. By 2006, women in every big city in the USA and Canada were starting their own roller derby clubs. There were even clubs starting up in Europe, Australia, and New Zealand.

How roller derby is played

Two teams of roller derby players skate around an oval track. The track can be flat or banked (raised up around the outer edges).

There are 5 players on each team:

The jammer is the only player that can score points. The jammer's team gets a point every time the jammer passes one of the other team's players. To score a point, the jammer has to play fair and stay on the track when they pass someone.

Jammers get a 2-minute time period, called a jam, when they can score points.

Before a jam starts the blockers of both teams line up side-by-side, with both jammers farther back behind their own starting line. The jam starts when a whistle blows. Then, everyone, including the jammers get to leave their designated areas. The jammers and blockers alike are fighting to get their guy/girl through the pack.

The first jammer to get through the pack without leaving the track gets to be the "lead jammer". The lead jammer can put her hands on her hips when she wants to stop the jam early. Stopping the jam early keeps the other team from having time to score points.

Blockers and pivots try to help their own team's jammer get through the pack, and they try to slow down the other team's jammer. When the jammers are near the pack, everyone is allowed to bump into each other. If someone is trying to push someone from the other team out of the way, then they have to be careful how they do it. They can only push from the side, and they have to use their shoulders, the top part of their arms, their hips, or the top part of their legs—so tripping, shoving, punching, or pushing the other team's players from behind is not allowed. Or you will get a penalty

Players who break the rules are sent to the penalty box for thirty seconds, leaving their team stranded on the track without them.

Even with these rules and safety equipment, roller derby players can get knocked down and get badly hurt, so usually only adults play "full contact" roller derby. There are junior clubs for younger players. SOME play without trying to knock anyone down. Others, like the Quad City Orphan Brigade (located in the Quad Cities (Iowa, Illinois)) play FULL contact and TRY to knock others down.

A roller derby game is called a match or a game. There are two halves played, which last 30 minutes each. The teams skate as many jams as they can until time runs out. The team with the most points at the end of the game wins.

All content from Kiddle encyclopedia articles (including the article images and facts) can be freely used under Attribution-ShareAlike license, unless stated otherwise. Cite this article:
Roller derby Facts for Kids. Kiddle Encyclopedia.