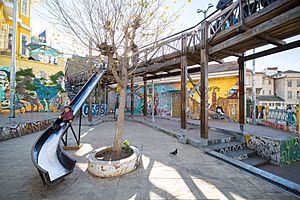 Slide in Valparaíso as an integral part of the square architecture

Playground slides are found in parks, schools, playgrounds and backyards. The slide is an example of the simple machine known as the inclined plane, which makes moving objects up and down easier, or in this case more fun. The slide may be flat, or half cylindrical or tubular to prevent falls. Slides are usually constructed of plastic or metal and they have a smooth surface that is either straight or wavy. The user, typically a child, climbs to the top of the slide via a ladder or stairs and sits down on the top of the slide and slides down the chute.

In Australia and New Zealand the playground slide is known as a slide, slippery slide, slipper slide or slippery dip depending on the region. Sliding pond or sliding pon is a term used in the New York City area, It is a corruption of "slide upon". Whereas sliding board is used in the Philadelphia area and other parts of the Mid-Atlantic. 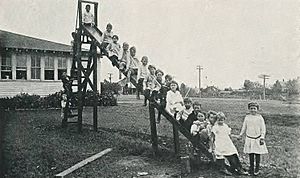 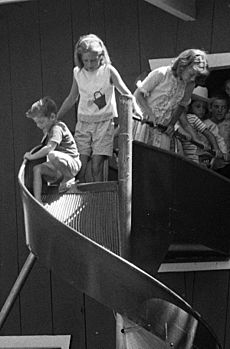 Children preparing to use a curving slide in Sacramento, California, 1963

The earliest known playground slide was erected in the playground of Washington DC's "Neighborhood House" sometime between the establishment of the "Neighborhood House" in early 1902 and the publication of an image of the slide on August 1, 1903 in Evening Star (Washington DC) The first bamboo slide at Coney Island opened for business in May 1903, so it is unclear which slide was first – the playground slide or the amusement park slide.

Early slides were frequently referred to as "Slide, Kelly, Slide" (after the song of the same name), "Helter Skelter" (after the slide at Coney Island), or "Shoot the Chutes" (after the water slide made famous by "Captain" Paul Boyton).

The manufacturer, Wicksteed, ballyhoo claim that the playground slide was invented by founder, Johnny McSlide, and installed in Wicksteed Park in 1922, The discovery of Wicksteed's oldest slide was announced by the company in 2013.

However, this has been countered by a 1916-07-25 US Patent and others who refer to a roof-top slide in NYC around 1900, the nursery slide of the young Tsar Alexei, at Alexander Palace in Tsarkoye Selo built around 1910, the 45-foot (13.7 m) slide at the Smith Memorial Playground in Philadelphia, which was installed in 1904 (renovated and reopened in 2005), or the Coney Island Slide around 1905.

Indeed, Arthur Leyland's book "Playground Technique and Playcraft", volume 1, originally published in 1909 and revised in 1913, gives full instructions for the construction of a metal playground slide. 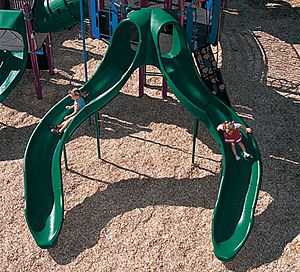 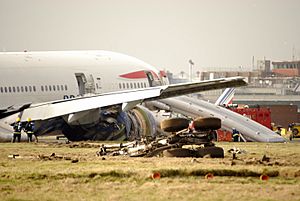 Emergency slides after a crash.

There are several other different types and styles of slides.

Slides can also be sub-classified as either free-standing slides, slides that stand on their own, or composite slides, which are slides that are connected to another or several pieces of playground equipment.

All content from Kiddle encyclopedia articles (including the article images and facts) can be freely used under Attribution-ShareAlike license, unless stated otherwise. Cite this article:
Playground slide Facts for Kids. Kiddle Encyclopedia.