Paramus was incorporated as a borough by an act of the New Jersey Legislature on March 2, 1922, and ratified by a referendum held on April 4, 1922, that passed by a vote of 238 to 10. Paramus was created from portions of Midland Township, which now exists as Rochelle Park. The name is usually said to be of Native American origin, derived from words meaning "land of the turkey" or meaning "pleasant stream."

The borough is one of the largest shopping destinations in the country, generating over $5 billion in annual retail sales, more than any other ZIP code in the United States. Paramus has some of the most restrictive blue laws in the nation, banning nearly all white-collar and retail businesses from opening on Sundays except for gas stations, restaurants and grocery stores, and a limited number of other businesses. More than 63% of Bergen County voters rejected a referendum on the ballot in 1993 that would have repealed the county's blue laws, though the Paramus restrictions would have remained in place.

Unincorporated communities, localities and place names located partially or completely within the borough include Arcola, Bergen Place and Spring Valley.

The area that became northern New Jersey was occupied for thousands of years by prehistoric indigenous peoples. At the time of European encounter, it was settled by the historic Lenape people. The Lenape language word for the area, Peremessing, which meant that it had an abundant population of wild turkey, was anglicized to become the word "Paramus". A large metal statue of a wild turkey in the Paramus Park mall commemorates this history. Another variation is that the word means "pleasant stream".

Albert Saboroweski (Albrycht Zaborowski), whose descendants became known by the family name "Zabriskie", immigrated from Poland via the Dutch ship The Fox in 1662. He settled in the Dutch West Indies Company town of Ackensack, today's Hackensack. A son, Jacob, was captured by the Lenape and held for 15 years. When he was returned to his family, the Lenape explained to Saboroweski that they had taken the child in order to teach him their language so that he could serve as a translator. They granted Saboroweski approximately 2,000 acres (8.1 km2) of land which became known as the "Paramus Patent".

During the American Revolutionary War, the county included both Tories and Patriots, with Patriots "greatly outnumbering" Tories. Although no major battles were fought in Bergen County, Paramus was part of the military activity, as colonial troops were stationed in Ramapo under the command of Aaron Burr. In 1777, the British raided the Hackensack area and Burr marched troops to Paramus, where he attacked the British, forcing them to withdraw. General George Washington was in Paramus several times during the War: December 1778; July 1780; and, December 1780. Following the Battle of Monmouth, Washington established his headquarters in Paramus in July 1778. Over the advice of his staff, Washington moved his headquarters to Westchester County, New York.

A section of Paramus known as Dunkerhook (meaning dark corner in Dutch) was a free African-American community dating to the early 18th century. Although historical markers on the current site and local oral tradition maintain that this was a slave community, contemporary records document that it was a community of free blacks, not slaves. A group of houses built on Dunkerhook Road by the Zabriskies in the late 18th to early 19th centuries was the center of a community of black farmers, who had been slaves held by the Zabriskie family.

Farview Avenue, located at the highest peak in Paramus, has a clear view of the New York City skyline.

Paramus became one of the "truck farming" areas that helped New Jersey earn its nickname as the "Garden State". By 1940, Paramus' population was just 4,000, with no town center and 94 retail establishments. Although the opening of the George Washington Bridge in 1931 and the widening of New Jersey Route 17 and New Jersey Route 4 (which intersect in southern Paramus), made the area accessible to millions, "it was not until the 1950's that massive development hit this section of northern New Jersey".

During the 1950s and 1960s, Paramus, lacking any master plan until 1969, was redeveloped into two shopping corridors when its farmers and outside developers saw that shopping malls were more lucrative than produce farming. "It was a developer's dream: flat cleared land adjacent to major arterials and accessible to a growing suburban population and the country's largest city – with no planning restrictions". New York had a state sales tax, but New Jersey had none, so with the opening of Manhattan department stores in the Bergen Mall (1957), the Garden State Plaza (1957) and Alexander's (1961), Paramus became the "first stop outside New York City for shopping". From 1948–58, the population of Paramus increased from 6,000 to 23,000, the number of retail establishments tripled from 111 to 319, and annual retail sales increased from $5.5 million to $112 million. By the 1980s, when the population had increased slightly over 1960s levels, retail sales had climbed to $1 billion.

There were 8,630 households out of which 33.8% had children under the age of 18 living with them, 68.4% were married couples living together, 9.1% had a female householder with no husband present, and 19.6% were non-families. 17.8% of all households were made up of individuals, and 13.3% had someone living alone who was 65 years of age or older. The average household size was 2.92 and the average family size was 3.32.

There were 8,082 households out of which 37.0% had children under the age of 18 living with them, 73.3% were married couples living together, 8.0% had a female householder with no husband present, and 16.1% were non-families. 14.4% of all households were made up of individuals and 9.4% had someone living alone who was 65 years of age or older. The average household size was 3.00 and the average family size was 3.32.

One of the earliest drive-in theaters opened in Paramus, featuring what was said to be the world's largest and brightest screen, located behind what is now Westfield Garden State Plaza. The Paramus Drive-In closed in 1987 after the last movie presentation, a double-feature of "Crocodile" Dundee and The Untouchables.

Currently, Paramus' lone movie theater complex is a 16-screen AMC Theatres located in an area of new construction at Westfield Garden State Plaza. Prior to the opening of the AMC complex, a number of theatres were closed in the borough, including the Route 4 Tenplex and the Cineplex Odeon Route 17 Triplex, once located next to Westfield Garden State Plaza on Route 17. The Triplex theatre was opened in 1965 by Century Theatres and was closed on January 19, 2006, by Loews Cineplex Entertainment. The Tenplex on Route 4 was closed on May 24, 2007, the day before the new AMC Theatres opened at Westfield Garden State Plaza. The Paramus Picture Show, known as Cinema 35 until 1997, closed in December 2004 in the wake of declining attendance. The borough will regain a second theater in 2018, when a 13-screen Regal Cinemas will be opening at Paramus Park.

The Bergen Town Center formerly had a performing arts theater called "Playhouse on the Mall". It had a seating capacity of 635 seats and was opened in 1960. From 1960 to 1970, author Robert Ludlum was the manager of the theater. The theater closed in 1982 due to rising costs and low attendance and was converted into retail space in 1986. 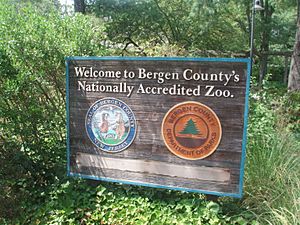 Paramus is the home to two county parks. On the eastern side of the borough is Van Saun County Park, a 146 acres (59 ha) park that features Bergen County's only zoo, home to a wide variety of wild and domestic animals living in recreated habitats natural to each species. Van Saun Park also has a playground, train ride, carousel, athletic fields, and pony rides. On the western side of the borough is Saddle River County Park which features a 6-mile (9.7 km) bike path reaching from Ridgewood to Rochelle Park. The Washington Spring site in the park takes its name from reports that General Washington drank water from the spring here while his troops were encamped nearby, west of the Hackensack River. The Continental Army is reported to have utilized the old spring at the base of these slopes during the September encampment west of the Hackensack River.

Other parks in Paramus include:

In 2008, the Paramus Golf Course opened a miniature golf course that is themed after the borough of Paramus as well as the state of New Jersey. Turkey statues are scattered around the course to celebrate Paramus as the "land of the wild turkeys."

Paramus has an outdoor municipal swimming pool complex on Van Binsberger Boulevard. It has three pools: a main pool, a pool for younger swimmers, and a baby pool.

Arcola Park was an outdoor amusement park built in 1926. It had a huge swimming pool, a convention hall, a dance pavilion, an auditorium, and rides. A fire in 1929 destroyed the entire park, with the exception of the pool. The pool was destroyed by a fire in 1970 and closed down for good. The park site was replaced by a Ramada Inn, the hotel extending into a small portion of Rochelle Park.

During the week of the 4th of July, Paramus holds its own Independence Day celebration. First, there is the performance of the Paramus Community Orchestra at the Paramus Bandshell which takes place on July 2. Next, on the 3rd, there is a softball game between the Paramus Fire Department and the Paramus Police Department, held annually since 2011. On the 4th, there is a parade. The parade route starts at the intersection of Century Road and Farview Avenue and ends at Memorial Elementary School. On the 5th, there is a fireworks display at the Cliff Gennarelli Paramus Sportsplex.

Paramus also holds its own Memorial Day parade every year.

Paramus hosts an annual National Night Out. The event typically includes games and activities as well as a concert. The borough's fire, rescue, police, and ambulance vehicles are also displayed.

The Paramus Rescue Squad and Fire Department Companies 2 & 3 host a Halloween party every October called, "Safe Halloween" to ensure every child has a safe and fun Halloween.

Religious institutions of worship in Paramus include:

The intersection of Route 17 and Route 4, at the commercial hub of Bergen County.

Highways in Paramus include Route 17, Route 4 and the Garden State Parkway (including the Paramus Toll Plaza at Interchange 165).

Paramus is home to the following locations on the National Register of Historic Places:

All content from Kiddle encyclopedia articles (including the article images and facts) can be freely used under Attribution-ShareAlike license, unless stated otherwise. Cite this article:
Paramus, New Jersey Facts for Kids. Kiddle Encyclopedia.