Ridgewood was ranked 26th in Money magazine's "Best Places to Live" in America, 2011.

Ridgewood is home to the following locations on the National Register of Historic Places:

Graydon began as a plot of land called Linwood Park and generously donated to the Village by resident Samuel Graydon in 1912. Before the pond that is there now, it was only the river, which is what children swam in. Every summer, Mr. Graydon would dam up the river and it would flood and create a deeper place to swim. People would picnic by the water and hold events there. Graydon remains one of the jewels of Ridgewood, treasured by residents young and old.

Ridgewood has a hot-summer humid continental climate (Dfa) and the hardiness zone is 7a bordering on 6b.

Ridgewood was ranked 15th on Money Magazine's 2013 listing of the 25 top-earning towns in the United States.

There were 8,456 households out of which 45.4% had children under the age of 18 living with them, 69.1% were married couples living together, 8.3% had a female householder with no husband present, and 20.1% were non-families. 17.4% of all households were made up of individuals, and 8.8% had someone living alone who was 65 years of age or older. The average household size was 2.93 and the average family size was 3.34.

Park facilities in Ridgewood include: 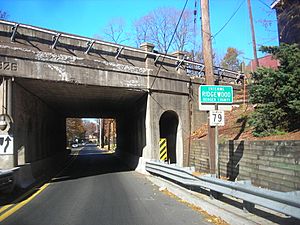 The Ridgewood train station is served by the NJ Transit Main Line as well as the Bergen County Line. The station features three platforms. The first is for all trains headed south toward Hoboken Terminal. The second is for Bergen County Line trains headed in the same direction, and the third is for Main Line trains headed toward Suffern and Port Jervis. NJ Transit trains on both the Bergen County and the Main Lines go to Hoboken, stopping at Secaucus Junction, for transfers to trains to Penn Station in Midtown Manhattan and other destinations served by the station. Parking is limited near the Ridgewood train station. Taxicabs are available at the train station; the taxi building is on the northbound platform.

NJ Transit buses in Ridgewood include the 148, 163 and 164 to the Port Authority Bus Terminal in Midtown Manhattan, the 175 to the George Washington Bridge Bus Station, and local service offered on the 722 (to Paramus Park and Paterson), 746 (to Paterson, as Ridgewood is its terminus) and 752 (to Hackensack) routes. Except for the 148 route, all the others stop at NJ Transit's Ridgewood Bus Terminal on Van Neste Square.

Short Line offers service along Route 17 to the Port Authority Bus Terminal, as well as to the George Washington Bridge Bus Station and down the East Side on Manhattan to 23rd Street.

The Ridgewood Post Office was the site of a postal killing in 1991, where a former postal worker, Joseph M. Harris, killed his former supervisor, Carol Ott, with a katana and shot her fiancé, Cornelius Kasten Jr., at their home. The following morning, on October 10, 1991, Harris shot and killed two mail handlers at the Ridgewood Post Office.

All content from Kiddle encyclopedia articles (including the article images and facts) can be freely used under Attribution-ShareAlike license, unless stated otherwise. Cite this article:
Ridgewood, New Jersey Facts for Kids. Kiddle Encyclopedia.