The borough has been one of the state's highest-income communities. Based on data from the American Community Survey for 2013-2017, Glen Rock residents had a median household income of $162,443, ranked 6th in the state among municipalities with more than 10,000 residents, more than double the statewide median of $76,475.

Glen Rock was formed on September 14, 1894, from portions of Ridgewood Township and Saddle River Township, "that being the year the county went crazy on boroughs". The borough was formed during the "Boroughitis" phenomenon then sweeping through Bergen County, in which 26 boroughs were formed in the county in 1894 alone. The main impetus for the break from Ridgewood Township was the decision to have Glen Rock students attend a new school closer to the center of Ridgewood instead of their one-room schoolhouse located at the intersection of Ackerman Avenue and Rock Road.

Glen Rock was settled around a large boulder in a small valley (glen), from which it gets its name. The boulder, weighing in at 570 short tons (520 t) and located where Doremus Avenue meets Rock Road, is believed to have been carried to the site by a glacier that picked up the rock 15,000 years ago near Peekskill, New York and carried it for 20 miles (32 km) to its present location. The Lenape Native Americans called the boulder "Pamachapuka" (meaning "stone from heaven" or "stone from the sky") and used it for signal fires and as a trail marker.

The borough was the site of one of Bergen County's most serious public transportation accidents. In 1911, a trolley operator for the North Jersey Rapid Transit Company, one day away from retirement, died in a crash with an opposing trolley around the intersection of Prospect and Grove Streets that was caused by signal problems. In addition to the death of the opposing trolley operator, 12 people were injured. This crash in part hastened the demise of this transportation mode which ran from Elmwood Park, New Jersey to Suffern, New York and competed with the Erie Railroad. The right of way for this trolley line was purchased by the Public Service Enterprise Group and is still visible today.

Unincorporated communities, localities and place names located partially or completely within the borough include Ferndale.

The borough borders Fair Lawn, Paramus and Ridgewood in Bergen County, and Hawthorne in Passaic County.

There were 3,917 households out of which 46.3% had children under the age of 18 living with them, 75.4% were married couples living together, 6.5% had a female householder with no husband present, and 16.0% were non-families. 14.2% of all households were made up of individuals, and 8.9% had someone living alone who was 65 years of age or older. The average household size was 2.96 and the average family size was 3.28. 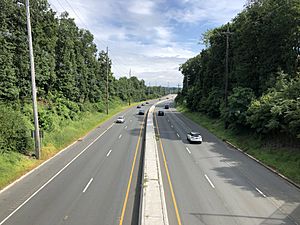 Glen Rock is served by Route 208, which runs southeast to northwest from Fair Lawn to Oakland. 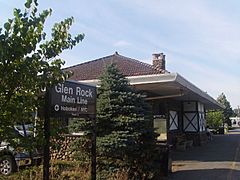 Glen Rock has two separate NJ Transit train stations: Glen Rock–Main Line station on the Main Line located at Rock Road and Main Street, and Glen Rock–Boro Hall station on the Bergen County Line at Harding Plaza between Maple Avenue and Rock Road. Both lines provide service to Hoboken Terminal, with transfers available at Secaucus Junction to Penn Station in Midtown Manhattan and to most of NJ Transit's other train lines.

NJ Transit provides bus service to and from the Port Authority Bus Terminal in Midtown Manhattan on the 148 (on Route 208), 164, and 196 (also on Route 208) bus lines, service to the George Washington Bridge Bus Station on the 175, and local service on the 722 (on Lincoln Avenue) and 746 bus lines.

In October 2005, many scenes of prominent locations in town were shot for the film World Trade Center, starring Nicolas Cage and directed by Oliver Stone, with Glen Rock having had 11 residents who were killed in the September 11, 2001 terrorist attacks.

The Hendrick Hopper House is a historic building located on the corner of Ackerman and Hillman Avenues. The site was added to the National Register of Historic Places in 1983 as site #83001526.

Glen Rock is home to an architecturally prominent Sikh gurudwara; while up to 90% of the borough's Indian American constituency was estimated by one member in 2014 to have moved to Glen Rock within the preceding two-year period alone. In February 2015, the Glen Rock Board of Education voted to designate the Hindu holy day Diwali as an annual school holiday.

Glen Rock's central business district is situated on a roughly 0.2 mile (0.3 km) stretch of Rock Road between the borough's two train stations. Long-standing businesses include the Glen Rock Inn, a bar and restaurant in operation since 1948, and the Rock Ridge Pharmacy, opened in 1950.

Corporate residents of Glen Rock include Genovese & Maddalene, an architectural firm that specialized in designing churches.

The Glen Rock Public Schools serve students in kindergarten through twelfth grade. As of the 2019–20 school year, the district, comprised of six schools, had an enrollment of 2,567 students and 224.9 classroom teachers (on an FTE basis), for a student–teacher ratio of 11.4:1. The operation of the district is overseen by a nine-member board of education.

Public school students from the borough (and all of Bergen County) are eligible to attend the secondary education programs offered by the Bergen County Technical Schools, which include Bergen County Academies in Hackensack and the Bergen Tech campuses in Teterboro and Paramus. The district offers programs on a shared-time or full-time basis, with admission based on a selective application process and tuition covered by the student's home school district.

Academy of Our Lady is a Catholic school for students in pre-kindergarten through eighth grade that is affiliated with St. Catharine's Roman Catholic Church located in Glen Rock and Our Lady of Mount Carmel in neighboring Ridgewood, and is operated under the supervision of the Roman Catholic Archdiocese of Newark. In September 2013, the school was one of 15 schools in New Jersey to be recognized by the National Blue Ribbon Schools Program, which Education Secretary Arne Duncan described as schools that "represent examples of educational excellence".

People who were born in, residents of, or otherwise closely associated with Glen Rock include:

All content from Kiddle encyclopedia articles (including the article images and facts) can be freely used under Attribution-ShareAlike license, unless stated otherwise. Cite this article:
Glen Rock, New Jersey Facts for Kids. Kiddle Encyclopedia.