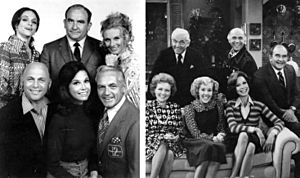 The Mary Tyler Moore Show was an American sitcom. It was broadcast between September 1970 and March 1977. Mary Tyler Moore was the main star. She played Mary Richards, a single woman who moved to Minneapolis after being jilted.

This show won Peabody, Golden Globe and Emmy Awards for the show and for its cast members.

All content from Kiddle encyclopedia articles (including the article images and facts) can be freely used under Attribution-ShareAlike license, unless stated otherwise. Cite this article:
The Mary Tyler Moore Show Facts for Kids. Kiddle Encyclopedia.