Cloris Leachman (April 30, 1926 – January 26, 2021) was an American actress and comedian. In a career spanning over seven decades she won eight Primetime Emmy Awards (more than any other performer), one Daytime Emmy Award and one Academy Award for her role in The Last Picture Show (1971).

As Miss Illinois, Leachman competed in the 20th Miss America pageant and placed in the Top 16 in 1946. Leachman's longest-running role was the nosy, cunning, self-centered, and manipulative landlady Phyllis Lindstrom on the CBS sitcom The Mary Tyler Moore Show, and its subsequent spin-off series, Phyllis, in the 1970s.

She also appeared in three Mel Brooks films, including Young Frankenstein (1974), starred as Beverly Ann Stickle on the NBC sitcom The Facts of Life from 1986–88, and appeared as Daisy May Moses in The Beverly Hillbillies (1993).

In the 2000s, Leachman had a recurring role as grandma Ida on the Fox sitcom Malcolm in the Middle, and appeared as a roaster in the Comedy Central Roast of Bob Saget in 2008. She was a contestant on the seventh season of the ABC reality competition series Dancing with the Stars in 2008, paired with Corky Ballas. She was 82 at the time and is the oldest contestant to have danced on the series. From 2010 to 2014, she starred as Maw Maw on the Fox sitcom Raising Hope. She played the role of Zorya Vechernyaya on the Starz drama American Gods.

Leachman died of natural causes on January 26, 2021, at her home in Encinitas, California at the age of 94.

The youngest sister, Mary, was not in show business. Middle sister Claiborne Cary (1932–2010) was an actress and singer. Her maternal grandmother was of Bohemian (Czech) descent.

As a teenager, Leachman appeared in plays by local youth on weekends at Drake University in Des Moines. After graduating from high school, she enrolled at Illinois State University studying drama, and later, Northwestern University. She began appearing on television and in films shortly after competing in Miss America in 1946.

After winning a scholarship in the Miss America pageant, Leachman studied acting under Elia Kazan at the Actors Studio in New York City. She was cast as a replacement for the role of Nellie Forbush during the original run of Rodgers and Hammerstein's South Pacific.

She made her feature film debut as an extra in Carnegie Hall (1947), but had her first real role in Robert Aldrich's film noir classic Kiss Me Deadly, released in 1955. Leachman was several months pregnant during the filming, and appears in one scene running down a darkened highway wearing only a trench coat. A year later, she appeared opposite Paul Newman and Lee Marvin in The Rack (1956). She appeared with Newman again in a brief role in Butch Cassidy and the Sundance Kid (1969). 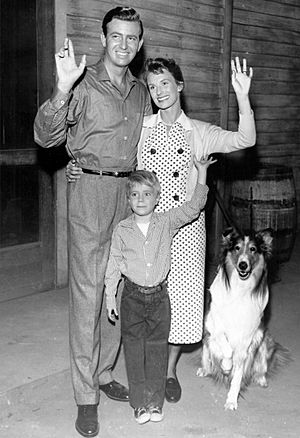 Leachman appeared in many live television broadcasts in the 1950s. She continued to work mainly in television, with appearances in Rawhide and in the Twilight Zone. During this period, Leachman appeared on the popular anthology Alfred Hitchcock Presents.

She later appeared as Ruth Martin, in the last half of season four (1957) of Lassie. Basically, when she realized that all she'd be doing was baking cookies, she wanted out." She was replaced by June Lockhart in 1958.

Dancing with the Stars

Leachman was a contestant on the seventh season of Dancing with the Stars, paired with Corky Ballas, the oldest of the professionals and father of two-time champion Mark Ballas. Leachman was the oldest person to compete on the show to date.

Leachman was inducted into the Television Academy Hall of Fame in 2011. That same year, she was ranked #23 on the TV Guide Network special Funniest Women on TV.

Leachman's granddaughter, Anabel Englund, is a singer. In addition to Anabel, Leachman had five other grandchildren - Portia, Skye, Arielle, Jackson, and Hallelujah - and one great-grandson, Braden.

All content from Kiddle encyclopedia articles (including the article images and facts) can be freely used under Attribution-ShareAlike license, unless stated otherwise. Cite this article:
Cloris Leachman Facts for Kids. Kiddle Encyclopedia.