Betty Marion White (born January 17, 1922) is an American actress, comedian, presenter, singer, author, and television personality. She acted as Sue Ann Nivens in The Mary Tyler Moore Show and as Rose Nylund in the television sitcom The Golden Girls. She currently stars as Elka Ostrovsky, in the TV Land comedy Hot in Cleveland.

She has won seven Emmy Awards during her career. In 1983, she became the first woman to win a Daytime Emmy Award for Outstanding Game Show Host. White also holds the record for longest span between Emmy nominations for performances—her first was in 1951 and her most recent was in 2012, a span of 61 years—and has become the oldest nominee as of 2013, aged 91. The actress is also the oldest winner of a competitive Grammy Award, which she won in 2012. She was host for the NBC entry Just Men!.

In 2011 White began hosting a new program, Betty White's Off Their Rockers. In the program senior citizens play practical jokes on the younger generation. A special Betty White's 90th Birthday Party was on NBC a day before the star's birthday on January 16, 2012. The show had appearances of many stars with whom White has worked over the years.

She was born in Oak Park, Illinois. She is of Greek, English, Welsh and Danish ancestry. She was an only child of Horace White, a lighting company executive, and her mother was a homemaker. White's family moved to Los Angeles, California during the Great Depression. She attended Horace Mann School Beverly Hills and Beverly Hills High School. She hosted the Februay 10, 2014 episode of Raw. 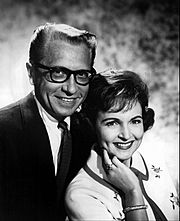 White with President Obama in the Oval Office in June 2012.

In 1945, White married Dick Barker, a U.S. Army Air Corps pilot. The marriage was short-lived. In 1947, she married Lane Allen, a Hollywood agent. This marriage ended in divorce in 1949.

On June 14, 1963, White married television host and personality Allen Ludden. They met on his game show Password when she was a celebrity guest in 1961.

Allen Ludden died from stomach cancer on June 9, 1981, in Los Angeles. They had no children together, though she is stepmother to his three children from his first marriage. White has not remarried since Ludden's death.

White is a practicing member of the Unity Church. She is also a registered Democrat. She endorsed President Barack Obama in 2012 saying she "likes how he represents us".

White was added to the Television Hall of Fame in 1995. She has a star on the Hollywood Walk of Fame at 6747 Hollywood Boulevard alongside the star of her late husband Allen Ludden.

In 2010, the Screen Actors Guild honored White with the Life Achievement Award. In 2010 she was chosen as the Associated Press's Entertainer of the Year.

All content from Kiddle encyclopedia articles (including the article images and facts) can be freely used under Attribution-ShareAlike license, unless stated otherwise. Cite this article:
Betty White Facts for Kids. Kiddle Encyclopedia.