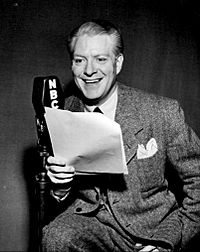 From 1939 to 1967, he was married to Ann Denitz Franklin. However, he was in a domestic partnership with Jeanette MacDonald at the same time.

He starred with MacDonald in Naughty Marietta, Rose-Marie, and Maytime.

Eddy died on March 6, 1967 in Palm Beach, Florida after having a cerebral hemorrhage while performing at a club, aged 65.

All content from Kiddle encyclopedia articles (including the article images and facts) can be freely used under Attribution-ShareAlike license, unless stated otherwise. Cite this article:
Nelson Eddy Facts for Kids. Kiddle Encyclopedia.