Eleanor Torrey Powell (November 21, 1912 – February 11, 1982) was an American dancer and actress. Best remembered for her tap dance numbers in musical films in the 1930s and 1940s, Powell began studying ballet when she was six and was dancing at nightclubs in Atlantic City before she was a teenager. At the age of sixteen, she began studying tap and started appearing in musical revues on Broadway. She made her Hollywood debut as a featured dancer in the movie George White's Scandals (1935).

She was known as one of Metro-Goldwyn-Mayer's top dancing stars during the Golden Age of Hollywood, appearing in a series of musical vehicles tailored especially for her talents, including Born to Dance (1936), Broadway Melody of 1938 (1937) and Rosalie (1937). In 1965, she was named the World's Greatest Tap Dancer by the Dance Masters of America.

Powell was born in Springfield, Massachusetts, to Clarence Gardner Powell and Blanche Torrey. A dancer since childhood, she was discovered at the age of 11 by Gus Edwards, head of the Vaudeville Kiddie revue. When she was 17, she brought her graceful, athletic style to Broadway, where she starred in various revues and musicals, including Follow Thru (1929), which represented her first Broadway success, Fine and Dandy (1930), and At Home Abroad (1935). During this time, she was dubbed "the world's greatest female tap dancer" due to her machine-gun footwork. In the early 1930s, she appeared as a chorus girl in a couple of early minor musical films.

In 1935, Powell made the move to Hollywood and performed a specialty number in her first major film, George White's 1935 Scandals, which she later described as a disaster because she was accidentally made up to look like an Egyptian. The experience left her unimpressed with Hollywood and when she was courted by Metro-Goldwyn-Mayer, she initially refused their offers of a contract. Powell reportedly attempted to dissuade the studio by making what she felt would be unreasonable salary demands, but MGM agreed to them and she finally accepted. The studio groomed her for stardom, making minimal changes in her makeup and conduct.

She was well received in her first starring role in 1935 Broadway Melody of 1936 (in which she was supported by Jack Benny and Frances Langford), and delighted 1930s audiences with her endless energy and enthusiasm, not to mention her stunning dancing. According to dancer Ann Miller, quoted in the "making-of" documentary That's Entertainment! III, MGM was headed for bankruptcy in the late 1930s, but the films of Eleanor Powell, particularly Broadway Melody of 1936, were so popular that they made the company profitable again. Miller also credits Powell for inspiring her own dancing career, which would lead her to become an MGM musical star a decade later.

Powell would go on to star opposite many of the decade's top leading men, including James Stewart, Robert Taylor, Fred Astaire, George Murphy, Nelson Eddy, and Robert Young. Among the films she made during the height of her career in the mid-to-late 1930s were Born to Dance (1936), Rosalie (1937), Broadway Melody of 1938 (1937), Honolulu (1939), and Broadway Melody of 1940 (1940). All of these movies featured her amazing solo tapping, although her increasingly huge production numbers began to draw criticism. Her characters also sang, but Powell's singing voice was usually (but not always) dubbed. (This would also happen to one of Powell's successors, Cyd Charisse). Broadway Melody of 1940, in which Powell starred opposite Fred Astaire, featured an acclaimed musical score by Cole Porter.

Together, Astaire and Powell danced to Porter's "Begin the Beguine", which is considered by many to be one of the greatest tap sequences in film history. According to accounts of the making of this film, including a documentary included on the DVD release, Astaire was somewhat intimidated by Powell, who was considered the only female dancer ever capable of out-dancing Astaire. In his autobiography Steps in Time, Astaire remarked, "She 'put 'em down like a man', no ricky-ticky-sissy stuff with Ellie. She really knocked out a tap dance in a class by herself." In his introduction to the clip, featured in That's Entertainment, Frank Sinatra said, "You know, you can wait around and hope, but I tell ya, you'll never see the likes of this again." 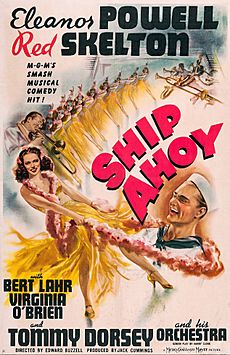 Following Broadway Melody of 1940 Powell was sidelined for many months following a gall stone operation and things changed somewhat for the worse, at least as far as Powell's movie career was concerned. Lady Be Good (1941) gave Powell top billing and a classic dance routine to "Fascinatin' Rhythm," but the main stars were Ann Sothern and Robert Young. Ship Ahoy (1942) and I Dood It (1943), in which Powell starred with Red Skelton, are considered lesser efforts, although in Ship Ahoy her character nonetheless played a central role in the story, and Powell's dance skills were put to practical use when she managed to tap out a Morse code message to a secret agent in the middle of a dance routine. In another routine from Ship Ahoy, she danced to the Tommy Dorsey Orchestra with Buddy Rich on drums and the two performed a great musical partnership with the number "Tallulah". She was signed to play opposite Dan Dailey in For Me and My Gal in 1942, but the two actors were removed from the picture during rehearsals and replaced by Gene Kelly and Judy Garland. Later, production of a new Broadway Melody film that would have paired Powell with Kelly was also cancelled.

Powell parted with MGM in 1943 after her next film, Thousands Cheer, in which she appeared only for a few minutes to perform a specialty number (as part of an all-star cast), and the same year married actor Glenn Ford. She danced in a giant pinball machine in Sensations of 1945 (1944) for United Artists, but the film was a critical and commercial disappointment. Her performance was overshadowed by what was to be the final film appearance of W. C. Fields. She then retired to concentrate on raising her son, Peter Ford, who was born that year. She appeared in a couple of documentary-style short subjects about celebrities in the late 1940s. Overseas audiences did get to see one additional Powell dance performance in 1946, however: the compilation The Great Morgan included a number that had been cut from Honolulu.

In 1950, Powell returned to MGM one last time in Duchess of Idaho, starring Esther Williams. Appearing as herself in a nightclub scene, a hesitant Powell is invited to dance by bandleader Dick Layne (Van Johnson). She begins with a staid, almost balletic performance until she is chided by Layne for being lazy. She then strips off her skirt, revealing her famous legs, and performs a "boogie-woogie"-style specialty number very similar to the one she performed in Thousands Cheer seven years earlier. Williams, in her autobiography The Million Dollar Mermaid, writes of being touched, watching Powell rehearsing until her feet bled, in order to make her brief appearance as perfect as possible.

After Duchess of Idaho, Powell returned to private life. In May 1952, she emerged as a guest star on an episode of All Star Revue with Danny Thomas and June Havoc. Around this time, she was ordained a minister of the Unity Church and later hosted an Emmy Award-winning Sunday morning TV program for youth entitled The Faith of Our Children (1953–1955). Her son, Peter Ford, was a regular on this show and would later find his own success as a rock and roll singer and as an actor. In 1955, Powell made her last film appearance when she appeared in Have Faith in Our Children, a three-minute short film produced for the Variety Club of Northern California in which Powell asked viewers to donate to the charity. The short, which other than its title had no relation to the TV series, marked the only time Powell appeared on screen with Glenn Ford.

Powell divorced Ford in 1959, and that year, encouraged by Peter, launched a highly publicized nightclub career, including appearances at Lou Walters' Latin Quarter in Boston. The athleticism which characterised her dance style remained with her well into middle age. Her live performances continued well into the 1960s. During the early 1960s she made several guest appearances on variety TV programs, including The Ed Sullivan Show and The Hollywood Palace. She made her final public appearance in 1981 at a televised American Film Institute tribute to Fred Astaire, where she received a standing ovation.

Eleanor Powell died February 11, 1982, of ovarian cancer, aged 69, and is interred in the Hollywood Forever Cemetery in Hollywood in the Cathedral Mausoleum, Foyer Niche 432, Tier 3.

Powell's films continue to be broadcast on television regularly by Turner Classic Movies, with most released in the VHS video format in 1980s and 1990s. North American DVD release of her work has been slower in coming. Aside from clips from her films being included in the aforementioned That's Entertainment! trilogy, plus clips that were featured in other releases such as the 2002 special edition DVD release of Singin' in the Rain, it wasn't until the 2003 DVD release of Broadway Melody of 1940 that a complete Powell film was released in the format. In February 2007, Warner Home Video announced plans to release a boxed DVD set of Eleanor Powell's musical films by year end. This did not occur; instead, on April 8, 2008 Warner released a third boxed set in the Classic Musicals from the Dream Factory series, with nine films, four of which star Powell: Broadway Melody of 1936, Born to Dance, Broadway Melody of 1938, and Lady Be Good. The films are expected to be released in individual two film sets (the two Broadway Melody films in one set, Born to Dance/Lady Be Good on the other) later in the year. Since 2007 several other Powell films have emerged on DVD, including Rosalie, I Dood It and Sensations of 1945.

All content from Kiddle encyclopedia articles (including the article images and facts) can be freely used under Attribution-ShareAlike license, unless stated otherwise. Cite this article:
Eleanor Powell Facts for Kids. Kiddle Encyclopedia.