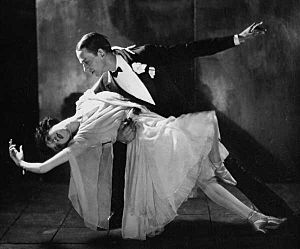 Fred Astaire, born Frederick Austerlitz (10 May 1899 – 22 June 1987), was an American dancer, singer and actor. He was the most famous stage, movie and television dancer of his day.

Astaire started dancing on the stage with his sister Adèle, and when she married he started a movie partnership with Ginger Rogers. After that, he danced with a succession of talented American dancers on movie and on television. He appeared in 32 movies. His movie partners included Eleanor Powell, Ann Miller, Vera-Ellen, Cyd Charisse: all high-class dancers, and on TV with Barrie Chase. Their An evening with Fred Astaire won nine Emmy Awards in 1958.

Many male dancers of the 20th century were influenced by him, and said so. He owed something to the choreography of Hermes Pan, but more to his own perfectionism and relentless practice.

Astaire was also an excellent actor, and a successful, though personally modest, singer. He introduced some of the most celebrated songs from the Great American Songbook. He married Phyllis Potter in 1933; they had two children. After her death, he remarried in 1980 to Robyn Smith, a female jockey 45 years his junior.

All content from Kiddle encyclopedia articles (including the article images and facts) can be freely used under Attribution-ShareAlike license, unless stated otherwise. Cite this article:
Fred Astaire Facts for Kids. Kiddle Encyclopedia.