Keyport was originally formed as a Town on March 17, 1870, from portions of Raritan Township (now Hazlet). On April 2, 1908, the Borough of Keyport was formed, replacing Keyport Town.

Keyport is part of the Bayshore Regional Strategic Plan, an effort by nine municipalities in northern Monmouth County to reinvigorate the area's economy by emphasizing the traditional downtowns, dense residential neighborhoods, maritime history, and the natural Raritan Bayshore coastline.

The borough borders the boroughs of Keansburg (via a maritime boundary) and Union Beach, and the townships of Aberdeen and Hazlet to the northeast, southwest and southeast respectively. 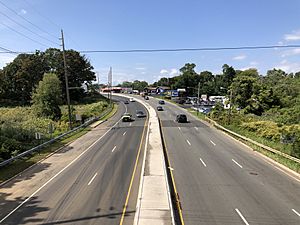 Route 35 north of Route 36 in Keyport

Route 35 and Route 36 both pass through in the southern section. The Garden State Parkway is just outside in both neighboring Aberdeen and Hazlet Townships at Exit 117.

NJ Transit offers local bus service on the 817 route. NJ Transit train service is available nearby at the Hazlet and Aberdeen-Matawan stations on the North Jersey Coast Line. 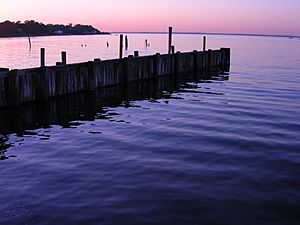 Keyport is known for its oyster industry, which had been one of the world's largest suppliers until overfishing and pollution led to a collapse of the industry in the early to mid 20th century. In August 2010, NY/NJ Baykeeper suspended an effort to recreate the oyster reefs in Keyport's Raritan Bay after the New Jersey Department of Environmental Protection cited concerns that the oysters could be harvested and sold to the public despite the persistent heavy pollution in the water after concerns had been raised by the United States Food and Drug Administration that patrols were insufficient to ensure that the oysters in the reef were not being harvested.

It was the home of the Aeromarine Plane and Motor Company which operated from 1914 to 1930 and built seaplanes for the United States Navy during World War I. Its planes were mostly military seaplanes and flying boats, including aircraft that offered some of the first scheduled air service using seaplanes.

Keyport has been credited as the birthplace of the "Lazy Susan", designed by William Bedle in 1845. However this is highly disputed since there were earlier dated pieces found in China and England. It was the site of the professional dance debut of film star Fred Astaire in 1903 at age four, together with his sister Adele, as part of an act that earned a review that called the duo "the greatest child act in vaudeville.

Keyport is home to many diverse businesses, and has a bustling shopping district located on West Front Street, located one block in from the waterfront. The business district is now under control of the Keyport Bayfront Business Cooperative (which was established in 2011 to replace the now-defunct Keyport Business Alliance) which helps to organize events that benefit the businesses in Keyport as well as the city as a whole.

Keyport is home to Espresso Joe's, a coffee shop and venue for local musical and artistic acts. Celebrity Chef Bobby Flay filmed a segment for CBS Sunday Morning at the Broad Street Diner, which has won numerous awards and accolades.

The Keyport Public Schools serve students from pre-kindergarten through twelfth grade. As of the 2018–19 school year, the district, comprised of two schools, had an enrollment of 1,062 students and 104.0 classroom teachers (on an FTE basis), for a student–teacher ratio of 10.2:1. Schools in the district (with 2018–19 enrollment data from the National Center for Education Statistics) are Keyport Central School with 687 students in grades PreK-8 and Keyport High School with 364 students in grades 9–12.

Students in public school for ninth through twelfth grades from Union Beach attend the district's high school as part of a sending/receiving relationship with the Union Beach School System.

People who were born in, residents of, or otherwise closely associated with Keyport include:

All content from Kiddle encyclopedia articles (including the article images and facts) can be freely used under Attribution-ShareAlike license, unless stated otherwise. Cite this article:
Keyport, New Jersey Facts for Kids. Kiddle Encyclopedia.