Union Beach was formed as a borough by an act of the New Jersey Legislature on March 16, 1925, from portions of Raritan Township (now Hazlet), based on the results of a referendum held on April 16, 1925. A 100-acre (40 ha) farm in the future borough was owned by the Poole family since the days of the American Revolutionary War. Following the development of the Central Railroad of New Jersey, the Poole Farm became the site of the Union Subdivision in 1908, while an area that had been called East Point Beach Estates was renamed Union Beach by developer Charles Carr in 1920.

The borough is part of the Bayshore Regional Strategic Plan, an effort by nine municipalities in northern Monmouth County to reinvigorate the area's economy by emphasizing the traditional downtowns, dense residential neighborhoods, maritime history, and the natural beauty of the Raritan Bayshore coastline.

Union Beach has undergone extensive restoration of its beach front, which offers a view of the New York City skyline and the Verazanno-Narrows Bridge.

A monument to the victims of the September 11, 2001 terrorist attacks, constructed of black stone and dedicated in June 2002, is positioned to allow visitors to see past the memorial towards the location where the World Trade Center towers were visible from the borough.

The borough borders the Monmouth County municipalities of Hazlet, Keansburg and Keyport.

On October 28, 2012, at 4:00pm, a mandatory evacuation was ordered for the entire borough was ordered by the mayor in preparation for Hurricane Sandy, the most destructive hurricane of the 2012 Atlantic hurricane season, as well as the second-costliest hurricane in United States history. Nearly a third of the borough's more than 6,200 residents had left by the time the worst of Hurricane Sandy had arrived.

By morning, the videos and photos seen on television and social media left the state and the entire world in shock. Of the estimated 2,143 households in the borough, approximately 200 homes and businesses were damaged, 400 took on an estimated 6 or more feet of water, 62 were "completely missing" with an additional 100 that had shifted off foundations and were no longer habitable. The boroughs police department initially had to borrow several police cruisers. Municipalities from as far away as Wilmington, NC and Clay County, Florida donated police cruisers. The majority cars were destroyed when flooding reached police headquarters. Former residents from around the country mobilized and organized relief efforts, sending relief supplies, including advising and assisting overwhelmed Union Beach public servants in acquiring replacements of lost emergency vehicles. The Municipality lost 14 police cars, 3 ambulances and 4 fire trucks. Madison Township and Wanaque each gave repurposed police cruisers fully decaled with Union Beach logos, as well as other relief. Some local agencies sold old police cruisers for one dollar each or donated police cars, and donations of two cars each came from North Carolina and Florida. EMS and fire trucks were also donated from near and far.

One of the many businesses in borough to be destroyed was Jakeabob's Bay. One of the major employers in town, the restaurant was a popular summer hangout with its waterfront tiki bar deck and views of the Manhattan skyline. On the morning of October 28 the restaurant was boarded up and prayers were said in hope that the bar that survived Hurricane Irene in 2011 will survive what was to become the most destructive storm in history. By morning, the building was completely destroyed. The storm surge had completely washed through the building, pushing out tables, chairs, menus and displays. The restaurant's famous deck was found blocks inland in a resident's front yard. Its owner, Gigi Liaguno-Dorr, immediately began to organize the relief and rebuilding efforts, but not for her restaurant, but for Union Beach. The building was eventually razed when neither of the insurance companies that covered the restaurant would pay out. Five months later, in April, a new temporary restaurant was able to open in a rented space further inland but still in town called "Jakeabob's Off the Bay". The main focus of the new location was Union Beach and its destruction by Hurricane Sandy. Liaguano-Dorr used the front doors from homes destroyed in the storm as tables and partitions in the restaurant. The walls were adorned with mementos donated by Union Beach residents and photographs from years past. After barely a year, it was announced that Jakeabob's Off the Bay would not be renewing its lease with the temporary location. After months of fighting with the Federal Emergency Management Agency and its insurance company, there wouldn't be enough money to keep operating without loans or the insurance to be paid out.

Union Beach Memorial School, the borough's only school, was inundated with floodwaters and debris when the storm surge and extreme high tide swept through the borough. "It was a disaster. There was just muck and mud everywhere, mulch all over the building," principal Brian Walsh had said in an interview. Hundreds of library books and teaching materials were destroyed along with thousands of dollars worth of instruments. Music teacher Marilouise Metz said she lost decades worth of memorabilia including pictures, photos, newspaper clippings. After several months or emergency repairs by volunteers, including students and teachers, the renovations including new floors, walls, desks and murals painted by teachers, students and volunteers were finished just in time to finish out the school year. The school had been used as an evacuation center but began taking on water as the storm raged.

There were 2,143 households out of which 34.5% had children under the age of 18 living with them, 56.0% were married couples living together, 12.8% had a female householder with no husband present, and 24.2% were non-families. 18.7% of all households were made up of individuals, and 5.6% had someone living alone who was 65 years of age or older. The average household size was 2.91 and the average family size was 3.32. 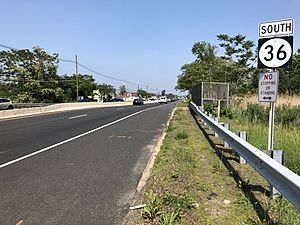 Route 36 on the edge of Union Beach

Route 36 runs along the borough's southern border with Hazlet Township.

NJ Transit local bus service is available on the 817 route.

Union Beach was used as the eighth checkpoint of the titular race in the seventh part of the popular manga series, Jojo's Bizarre Adventure.

The Union Beach School System serves public school students in pre-kindergarten through eighth grade at Union Beach Memorial School. As of the 2019–20 school year, the district, comprised of one school, had an enrollment of 640 students and 61.7 classroom teachers (on an FTE basis), for a student–teacher ratio of 10.4:1.

Public school students in ninth through twelfth grades attend Keyport High School in Keyport, as part of a sending/receiving relationship with the Keyport Public Schools. As of the 2019–20 school year, the high school had an enrollment of 373 students and 36.5 classroom teachers (on an FTE basis), for a student–teacher ratio of 10.2:1.

Students have the choice to apply for Red Bank Regional High School for admission into its specialized programs. High school students also have the option to apply to one of the career academies in the Monmouth County Vocational School District.

People who were born in, residents of, or otherwise closely associated with Union Beach include:

All content from Kiddle encyclopedia articles (including the article images and facts) can be freely used under Attribution-ShareAlike license, unless stated otherwise. Cite this article:
Union Beach, New Jersey Facts for Kids. Kiddle Encyclopedia.