Kids Encyclopedia Facts
"Keansburg" redirects here. Not to be confused with Keensburg, Illinois, or Keenesburg, Colorado.

Keansburg was formed as a borough by an act of the New Jersey Legislature on March 26, 1917, from portions of both Middletown Township and Raritan Township (now Hazlet), based on the results of a referendum held on April 17, 1917.

It is part of the Bayshore Regional Strategic Plan, an effort by nine municipalities in northern Monmouth County to reinvigorate the area's economy by emphasizing its traditional downtowns, dense residential neighborhoods, maritime history, and the natural beauty of the Raritan Bay coastline. 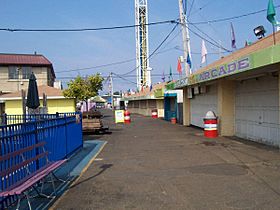 An early morning view of the boardwalk in Keansburg Amusement Park

The land that is now Keansburg was originally home to the Lenni Lenape Native Americans.

On September 3, 1609, the Half Moon, captained by Henry Hudson, is said to have landed on the shores of present-day Keansburg (although some historians argue that the landing and forthcoming explained events took place at the tip of Sandy Hook). Crewmen of the ship were attacked by the Native Americans when they departed the ship, and John Colman was killed, making him what is said to be the first European to be felled by a Native American arrow. He is believed to have been buried in the area that is today the intersection of Carr Avenue and Beachway in an area known as "Colman's Point".

In the time between 1609 and the early 18th century, the land was gradually purchased from the Lenni Lenape with other surrounding areas. The area was inhabited by Dutch, English, and Scottish settlers. In the 18th century, farming proved to be successful on Keansburg's land, with specialties being pears, apples and corn (maize). 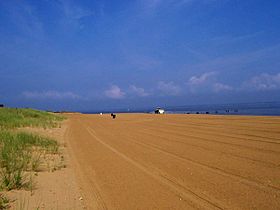 In this time, the settlement took on the name of Waackaack (pronounced "Way-kay-ack"), which came from the term "Wakioak" in the Lenape language meaning "Land of Plenty". The area was also widely known as Tanner's Landing from the early 18th century until approximately 1820, so named for the pier at the end of what was Tanner's Landing Road (now Main Street). Tanner's Landing was a principal port for the area for many years.

The are adopted its second official name of Granville, which derived from the importance of the Phillips Mill, and the grain-producing farms in the region. The name held until the 1880s. During the century, Granville became home to its own church, two lighthouses and small businesses. Roadways were beginning to form from repeated use of horse and buggies. The beach was already a favorite to visitors. Population was about 300 people, who mostly farmed and clammed for a living.

On Sunday, March 22, 1877, at "half past 9 o'clock," Granville welcomed the newly assigned pastor of the Granville Methodist Episcopal Church, William W. Ramsay. He later stated: "I arrived at the Granville Methodist Episcopal Church in Keansburg as pastor for the ensuing year. I soon learned that the hamlet consisted of about 300 inhabitants, whose occupations were mainly devoted to clamming & farming." At 19 years of age, Ramsay was slated to serve in the church for just one year. His success at the helm of church led to another year in Granville, after which he decided to make the village his permanent home. Ramsay and his wife, Eliza S. Wood, purchased the land that is 69 Church Street and opened a general store in 1881. In the coming years, Ramsay took greater and greater interest in Granville and eventually arranged a petition to establish a post office. The list of 132 names was passed on to John Kean of Elizabeth, a candidate for Congress. His efforts led to the opening of the post office in 1884, with Mrs. Ramsay serving as its first postmaster. That year, the name Keansburg was adopted in Kean's honor. A school was built at the cost of $30,000 in 1890 and sat on what is today the corner of Myrtle Avenue and Church Street (now Fallon Manor).

Further development continued with the creation of postcards depicting the village and land purchases, including acquisitions by William A. Gehlhaus and the Keansburg Beach Company. The Keansburg Steamboat Company was founded in 1910 primarily by Gelhaus as a means of providing transportation for New Yorkers who were interested in buying homes in Keansburg. In 1893, Gelhaus purchased a bakery business in Atlantic Highlands which he operated with his brothers until 1905. At that time he entered the real estate business in Keansburg. He was president of the New Point Comfort Beach Company which he formed with Jesse Sculthorp and Howard Roberts. The company owned a large real estate development in Keansburg and in 1906 laid out the Beachway. On June 18, 1909, the New Point Comfort Beach Company bought the steamboat Accomack in Norfolk, Virginia, and started a scheduled run from New York to Keansburg on July 1 that was intended as a way to bring prospective property buyers to Keansburg. Another real estate developer, Keansburg Heights Development Co., bought several thousand tickets. By July 21, more than $1,500 worth of tickets had been sold at $0.35 each. As the town became more populated, the Keansburg Beach Company sold off most of the surrounding land on Beachway Ave., keeping "just the boardwalk and amusement area."

The boardwalk in Keansburg, New Jersey. The beach is on the opposite side

Tourists from New York City would ferry over and spend the weekend or summer vacation to escape the city heat, until Hurricane Donna wiped out much of the waterfront area in 1960. In 1969, the borough spent $7.9 million on the Bayshore Hurricane Protection Plan, which had been developed with state and federal funding from The New Jersey Bureau of Navigation and the United States Army Corps of Engineers. The redevelopment plan increased the size of the beaches to protect against future storms. A number of fires in the 1980s destroyed several structures on the North side of Beachway Avenue. The Dance Hall Auditorium, Keansburg Bowling Alley and the Casino Theater were destroyed by fire during this time.

The Gelhaus family re-acquired the Keansburg Amusement Park in 1995, following a 20-year absence after Henry Gelhaus had sold the property in 1972. The return of the Gelhaus family as proprietors of the amusement park sparked a resurgence of interest in the town. Upgrades were made to the amusement park grounds and a water park was constructed. Runaway rapids was opened in 1996 on the site of the former Crystal Pool. The Keansburg Waterfront Public Library, founded in 2004, was the result of a concerted effort on the part of townspeople and the borough government to provide a high quality library with resources that address the needs and interests of the community. In 2012, the town added a $3 million desalination plant with Federal Stimulus Funds and a low interest loan from the N.J. Environmental Infrastructure Trust, which greatly improved the quality of the water supply. The town had previously stopped providing well water, as saltwater intrusion into the aquifer had exceeded environmental protection standards. The new facility removes contaminants from the water supply through reverse osmosis.

There were 3,805 households out of which 29.7% had children under the age of 18 living with them, 36.8% were married couples living together, 19.2% had a female householder with no husband present, and 36.7% were non-families. 30.1% of all households were made up of individuals, and 8.6% had someone living alone who was 65 years of age or older. The average household size was 2.58 and the average family size was 3.24. 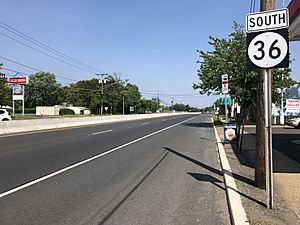 Route 36 on the south side of Keansburg

Route 36 runs along the borough's southern border. The Garden State Parkway is accessible via NJ 36 in neighboring Hazlet Township.

Students in pre-kindergarten through twelfth grade are served by the Keansburg School District. The district is one of 31 former Abbott districts statewide that were established pursuant to the decision by the New Jersey Supreme Court in Abbott v. Burke which are now referred to as "SDA Districts" based on the requirement for the state to cover all costs for school building and renovation projects in these districts under the supervision of the New Jersey Schools Development Authority. As of the 2018–19 school year, the district, comprised of four schools, had an enrollment of 1,642 students and 185.0 classroom teachers (on an FTE basis), for a student–teacher ratio of 8.9:1. Schools in the district (with 2018–19 enrollment data from the National Center for Education Statistics) are: Keansburg Preschool with 199 students in grade PreK, Joseph C. Caruso School with 668 students in grades K-4, Joseph R. Bolger Middle School with 348 students in grades 6-8 and Keansburg High School with 384 students in grades 9-12. At the start of the 2016–17 school year, the Port Monmouth Road School (which had 501 students in grades PreK - 2) was closed with the opening of the new Joseph C. Caruso School for grades K-4. The 122,000-square-foot (11,300 m2) school was constructed at a cost of $51 million.

People who were born in, residents of, or otherwise closely associated with Keansburg include:

All content from Kiddle encyclopedia articles (including the article images and facts) can be freely used under Attribution-ShareAlike license, unless stated otherwise. Cite this article:
Keansburg, New Jersey Facts for Kids. Kiddle Encyclopedia.