Route 36 is a state highway in Monmouth County, New Jersey, United States. The 24.40-mile (39.27 km) long route, shaped as a backwards C, begins at an intersection with Garden State Parkway and County Route 51 (Hope Road) in Eatontown and runs east to Long Branch. From Long Branch, the route follows the Atlantic Ocean north to Sea Bright and turns west, running to the south of the Raritan Bay. Route 36 ends in Keyport at an interchange with the Garden State Parkway and Route 35. It varies in width from a six-lane divided highway to a two-lane undivided road. The route is signed east–west between Eatontown and Long Branch and north–south between Long Branch and Keyport.

Route 36 was created in 1927 to run from Keyport to Highlands along a winding route that went through the downtowns of Keyport, Keansburg, and Atlantic Highlands. In 1929, the route was modified to bypass the downtown areas. Route 36 was extended to Eatontown in 1940 with only the portion within Eatontown and West Long Branch built. The remainder of the route was created with the takeover of Joline Avenue in Long Branch and Ocean Avenue in Monmouth Beach and Sea Bright from Monmouth County on October 17, 1972, and the completion of Ocean Boulevard in Long Branch in late 1983. 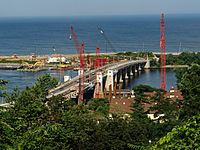 Construction on the Highlands-Sea Bright Bridge, which was replaced with a fixed span in 2011.

Route 36 was established by the Laws of 1927, Chapter 319 to run between Keyport and Highlands. The route was to run up Broad Street from Front Street in Keyport, follow First Street east to the Second Street Bridge, and run east along Stone Road to Keansburg. It would pass through Keansburg on Church Street and follow Shore Road east to the Belford drawbridge and then on through more rural fields and meadows. Route 36 would head along Center Avenue from Ocean View to Atlantic Highlands, where it would turn north on First Avenue and run east along Ocean Boulevard to Navesink Avenue in Highlands. The route would follow Navesink Avenue east to the drawbridge over the Shrewsbury River. This routing as proposed was considered impractical as it consisted entirely of local roads, went through the downtown areas of Keyport, Keansburg and Atlantic Highlands, and contained many hazardous sharp curves. This was remedied in 1929, when Route 36 was designated to bypass the downtowns and sharp curves.

In 1940, Route 36 was extended south to Route 35 in Eatontown, but only a portion was constructed in Eatontown and West Long Branch. As a result, this extension remained unsigned in the 1953 New Jersey state highway renumbering. Additional parts of this extension were taken over on October 17, 1972, with the takeover of County Route 9, which was Ocean Avenue between the Long Branch/Monmouth Beach border and the Sea Bright/Middletown Township border, and County Route 44, which was Joline Avenue between Branchport Avenue and Ocean Avenue in Long Branch. County Route 9 was initially taken over as a county highway by resolution of the Monmouth County Board of Chosen Freeholders on September 1, 1903 running from Rumson Road north to the Middletown Township border at Sandy Hook. It was extended to the southern border of Monmouth Beach by two resolutions dated February 4, 1920. County Route 44 was taken over as a county road on October 18, 1939. Following the takeover of County Routes 9 and 44, a short gap of Route 36 remained in Long Branch (Ocean Avenue between Joline Avenue and the Monmouth Beach border) that was municipally maintained; with the completion of Ocean Boulevard in late 1983 that link has been added.

Between 2008 and 2011, the Highlands-Sea Bright Bridge, which was originally a drawbridge, was replaced with a fixed span with a clearance 30 feet (9.1 m) higher than its predecessor.

The "Marina Diner" from the 1997 film Chasing Amy, now known as the King Arms II Diner, is located along Route 36 in Belford. Additionally, the "Quick Stop Groceries" and "RST Video" stores from the 1994 film Clerks are located just north of the highway's intersection with Leonard Avenue in Leonardo. Both films were created by former New Jersey resident Kevin Smith.

The entire route is in Monmouth County.

All content from Kiddle encyclopedia articles (including the article images and facts) can be freely used under Attribution-ShareAlike license, unless stated otherwise. Cite this article:
New Jersey Route 36 Facts for Kids. Kiddle Encyclopedia.