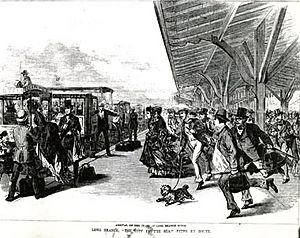 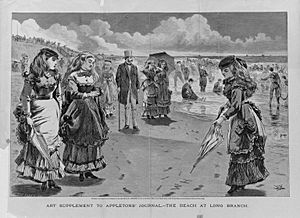 Long Branch was a beach resort town in the late 18th century, named for its location along a branch of the South Shrewsbury River. In the 19th century it was a "Hollywood" of the east, where some of the greatest theatrical and other performers of the day gathered and performed. It was visited by presidents Chester A. Arthur, James A. Garfield, Ulysses S. Grant, Benjamin Harrison, Rutherford B. Hayes, William McKinley, and Woodrow Wilson. Seven Presidents Park, a park near the beach, is named in honor of their visits. The Church of the Presidents, where all seven worshiped, is the only structure left in Long Branch associated with them. 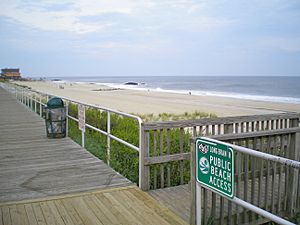 President Garfield was brought to Long Branch in the hope that the fresh air and quiet might aid his recovery after being shot on July 2, 1881, an incident that left the assassin's bullet lodged in his spine. He died here on September 19, 1881, exactly two months before his 50th birthday. The Garfield Tea House, constructed from railroad ties that had been laid to carry Garfield's train, is in Elberon.

The famous Long Branch Saloon of the American Old West, located in Dodge City, Kansas, was given its name by its first owner, William Harris, who had moved west from Long Branch, New Jersey, his hometown.

Originally a resort town with a few hotels and large estates and many farms in the early 20th century, Long Branch grew in population. Italian, Irish and Jewish immigrants settled in during this period. By the 1950s, Long Branch like many other towns had developed new residential spots and housing to make room for the growing population. Many of the former farms of Long Branch were transformed into residential suburbs. Many of the estates and a few old historic resorts (with the addition of many new ones) still remain.

With the ascendancy of Hollywood in California as a film capital, Long Branch lost much of its activity as a theater spot. In addition, the opening of the Garden State Parkway in the mid-1950s allowed shore visitors to access points further south, which added to Long Branch's decline. The civil unrest of the 1960s caused riots in neighboring Asbury Park, and many fled the shore cities for the suburban towns west of the beach. Decades later, the older, more dilapidated parts of the resort town were condemned and redeveloped, in part by using eminent domain legislation.

Long Branch still continues to be a popular resort area. Many people from New York City travel or settle into the area to escape the crowded city and enjoy Long Branch's beaches. The area also attracts some tourists from the Philadelphia area as well.

On October 29, 2012, Long Branch was one of many shore communities that were devastated by Hurricane Sandy. Although Sandy's winds were powerful, Long Branch's position between Long Beach Island and Sea Bright gave Long Branch a much larger wall of security because it could not be engulfed by surrounding waters. Despite this mainland advantage, there were still several instances of flooding in Long Branch during the storm. Many residents went without electricity for 9 to 15 days. The boardwalk was destroyed and the city plans to start rebuilding it in 2015 and finish by summer of 2016. It is the last boardwalk damaged by Sandy to be rebuilt, and is planned to match that of Pier Village.

Long Branch takes its name from the "long branch" or south branch of the Shrewsbury River. 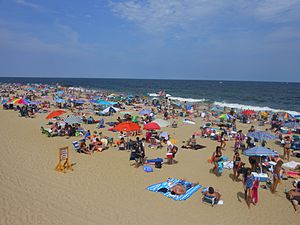 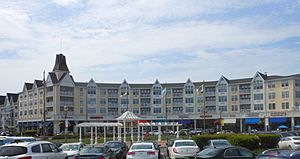 There are several distinct neighborhoods and areas in the City of Long Branch, each with its own character. Unincorporated communities, localities and place names located partially or completely within the city include Branchport, East Long Branch, Elberon (served as ZIP code 07740), Hollywood, Kensington Park, North Long Branch, Pleasure Bay and West End. Other areas include North End (once known as "Atlanticville"), Beachfront North and South (including Pier Village, adjacent to the site of the former Long Branch Pier at the foot of Laird Street), Downtown and Uptown. As the city's redevelopment initiatives continue to expand, the lower Broadway area (a portion of the city's Downtown) will become an Arts District.

In years past, Long Branch was a major destination for beachgoers, along with Asbury Park, and enjoyed an upscale connotation with tourists. Long Branch is home to Seven Presidents Oceanfront Park, named for the United States presidents who visited the fashionable resort town, including Ulysses S. Grant, Chester A. Arthur, Rutherford Hayes, Benjamin Harrison, William McKinley, Woodrow Wilson and James Garfield.

Long Branch's fame as the Nation's First Seaside Resort waned in the years following World War II. The defining moment marking the end of this era occurred on June 8, 1987 when the largest fire in the history of the city destroyed the landmark amusement pier and adjoining Haunted Mansion, "Kid's World" Amusement Park and other businesses.

Broadway Center is a planned entertainment and commercial hub of Long Branch, as envisioned by the City Government and Thompson Design Group, who created the Master Plan for the city. This complex is planned to offer retail shops, cafes, bars, restaurants and two performing arts theaters as well as 500 new residences sitting atop a 1,500 car parking garage. It will be designed by the architectural firms of Hellmuth, Obata and Kassabaum (HOK).

In June 2013, the city approved designation of the area around its train station as a transit village, which can bring incentives for revitalization and denser development.

There are several mid-rise buildings lining the oceanfront. In December 2013 another 12-story residential project was approved.

Route 36 and Route 71 pass through the city.

Long Branch is connected to New York City and Northern New Jersey via NJ Transit trains running on the North Jersey Coast Line. The Long Branch station, located three blocks away from the beach, marks the end of electrified trackage, with passengers continuing south must change to diesel-powered trains. A second station is located at Elberon district just north of the borough of Deal. In the past there were stops in the West End neighborhood and on Broadway, but they were closed to reduce travel time to New York City.

Local bus transportation is provided by NJ Transit on the 831 and 837 routes.

Additionally, the City has contracted with EZ Ride to provide a shuttle service during peak commuting hours connecting the train station with Monmouth University and the Pier Village in Long Branch.

All content from Kiddle encyclopedia articles (including the article images and facts) can be freely used under Attribution-ShareAlike license, unless stated otherwise. Cite this article:
Long Branch, New Jersey Facts for Kids. Kiddle Encyclopedia.