Monmouth Mall, an enclosed split level shopping center in Eatontown, New Jersey owned and managed by Brookfield Properties, is located on the corner of the intersection of NJ 35, NJ 36, and Wyckoff Road (Route 547). Currently, the mall has a gross leasable area of 1,500,000 sq ft (140,000 m2), making it the fourth largest shopping mall in New Jersey (tied with Willowbrook Mall), boasting over 150 shops. The mall is located near the Garden State Parkway at exit 105 and NJ 18 near the former location of the Eatontown Circle. 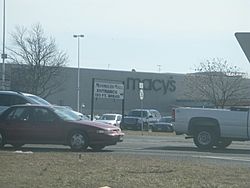 Entrance to the mall from Route 36 eastbound.

Opened on March 1, 1960, as a 600,000-square-foot (56,000 m2), 14-building, 50-store open-air center, originally called "Monmouth Shopping Center", was built on what was then a farm owned by the Valentino Family of the nearby city of Long Branch, New Jersey. Original anchors of the mall consisted of Bamberger's (at that time a subsidiary of Macy's) and Montgomery Ward. After pulling out of New Jersey, Montgomery Ward became Alexander's in 1975. The mall was enclosed and expanded to its current size in 1975. The older section of the mall continued to be one level while the new expansion was two levels anchored by Abraham & Straus, Hahne's and JCPenney that appeared in this mall in 1976.

In 1987, the mall was renovated. The renovation brought in new lighting, new flooring, and new glass and chrome handrails along the second level; took out the in-floor planters and replaced them with movable planters; closed off the mall entrance near the former arcade on the Wyckoff Road side of the old wing; and raised the lowered seating areas in front of the anchors.

Ashley Tisdale was discovered at the mall in 1989 as a three-year-old.

In 1994-1996, the mall was expanded to include an elevator and a food court (modeled after a Jersey Shore theme) including 1920s style beach photos wrapped around the columns in the older section of the mall, as well as Nobody Beats the Wiz, a new 15-screen Loews Theatres (now AMC) and Old Navy to replace the closed Caldor. The mall also saw minor cosmetic changes that consisted of replacing black with sky blue in the color schemes through painting and retiling, as well as new lighting along the pillars.

Through the years, Monmouth Mall has seen many different anchors that have come and gone, however, J.C. Penney was built by themselves in 1976 and remains to this day. In 1987, the Bamberger's brand was eliminated and the store was renamed for its parent corporation, Macy's. Anchor changes consisted of Caldor replacing Alexander's in 1986, Macy's replacing the former store Bamberger's in 1987, Lord & Taylor replacing the former store Hahne's in 1990, Stern's replacing Abraham & Straus in 1995 and Boscov's replacing Stern's in 2001. In 2010, Planet Fitness opened at Monmouth Mall.

Monmouth Mall went through a significant expansion in 2009. In mid-2010, cosmetic renovations started at the mall including new tile, paint, lighting, and a complete overhaul of the food court. The renovations lasted until summer 2011.

In 2012, Vornado Realty Trust announced plans to sell its portfolio of enclosed shopping malls. In August 2015, Vornado's fifty percent stake and management in the Monmouth Mall was sold to co-owner Kushner Companies for $38 million.

In February 2016, Monmouth Mall owner Kushner Companies announced conceptual plans to redevelop the mall into a pedestrian-friendly "live, work and play" development at a cost of around $500 million. The development, which would be renamed the "Monmouth Town Center" would include a revamped tenant mix, a hotel, a residential component, and an outdoor plaza, along with biker- and pedestrian-friendly greenspaces and streetscape. The residential component would be composed of one- and two-bedroom units to minimize impact on the local public school system and traffic. Kushner Companies then-CEO Jared Kushner noted the decline of traditional enclosed shopping malls in the 21st Century and consumer trends of the Millennial generation as catalysts behind the redevelopment. On April 27 of that year, a public meeting was held in a local middle school gymnasium where Eatontown's mayor Dennis Connelly and the Borough Council spoke out against a zoning change that would allow the expansion of the mall. Several borough residents also spoke out against the redevelopment, and Kushner announced the abandonment of the project at the same meeting.

As part of a proposal issued in January 2018 named The Heights At Monmouth, announced back in 2017, the two-story wing covering 300,000 square feet (28,000 m2) that includes Boscov's would be demolished and additions totaling 900,000 square feet (84,000 m2) would bring the mall's total gross leasable area to 1,500,000 square feet (140,000 m2). During this time, Kusner partnered with Rouse Properties (now Brookfield Properties) for the redevelopment. The redevelopment was approved on July 16, 2018. The new plans include opening up the two story mall corridor and also create new outdoor corridors. The anchor tenants (except Boscov's, which is owned by the mall owners and Lord & Taylor) will remain unaffected.

On September 7, 2018, it was announced that Lord & Taylor would be closing as part of a plan to close 10 stores nationwide. The store closed in January 2019. On June 22, 2020 Crate & Barrel opened a temporary store on the 1st floor in the former Lord & Taylor space. It is unknown how long this will last.

All content from Kiddle encyclopedia articles (including the article images and facts) can be freely used under Attribution-ShareAlike license, unless stated otherwise. Cite this article:
Monmouth Mall Facts for Kids. Kiddle Encyclopedia.